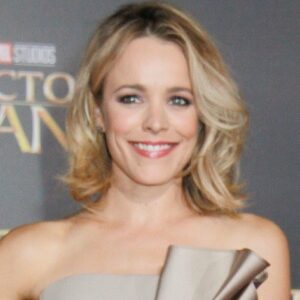 Rachel McAdams is an actress best recognized for her appearances in ‘Mean Girls,’ ‘The Notebook,’ and ‘Wedding Crashers.’ She is stunningly beautiful and talented. She discovered her passion for skating as a young youngster. She began competitive figure skating at the age of four and had already won several awards by the time she was a teenager. When she was a teen, she was also bitten by the acting bug. She told her parents that she wanted to act after seeing a children’s theater performance. As a high school student, she became heavily immersed in drama and began directing children’s theatrical productions before the age of 20. She traveled to the United States in pursuit of greater chances after starting her acting career in Canada. She made her big break when she was cast as Regina in the teen comedy ‘Mean Girls’—she was 25 at the time and effortlessly slid into the role of the attractive adolescent! The film was a smash hit, and she was quickly flooded with offers for film roles. When she had to play a sailor in ‘Wedding Crashers,’ the actress took a course in sailing to fully immerse herself in the role. The stunning actress is also a committed environmentalist who is involved in a number of social initiatives.

Sandra and Lance McAdams had a daughter named Rachel. She has two younger brothers and sisters. Her mother is a nurse, while her father is a former truck driver who now works as a furniture mover.
She began figure skating as a toddler and won numerous regional awards. Even though she was an expert skater, she never thought of it as anything more than a pastime.
She began her performing career as a child, attending Disney and Shakespeare summer camps. She has also appeared in London shows by the Original Kids Theatre Company.
Before joining the Central Elgin Collegiate Institute, she attended the Myrtle Street Public School. She was a member of the student council and engaged in athletics.
She enrolled in York University’s four-year theatrical program and earned a Bachelor of Fine Arts honours degree in 2001.

She made her cinematic debut in the Italian-Canadian co-production ‘My Name is Tanino’ in 2002.
In 2002, she starred in her first Hollywood film. In ‘The Hot Chick,’ she played a high school student whose body is mysteriously exchanged with that of a criminal.
She made her big break in 2004 when she was cast as Regina George, a gorgeous but manipulative adolescent in the film ‘Mean Girls.’ The film was a tremendous commercial success, and she received a lot of accolades for her performance.
Following the popularity of ‘Mean Girls,’ she was inundated with film proposals. In 2004, she acted alongside Ryan Gosling in the film ‘Notebook,’ in which she played Allie Hamilton. The film was well-received at the box office and won several accolades.
In the romantic comedy ‘Wedding Crashers,’ she plays Clare Cleary, an environmental activist. The film was a big success, debuting at No. 2 in the box office on its first weekend. In the same year, she appeared in two more films: ‘The Red Eye’ and ‘The Family Stone.’
She had grown in popularity and was in high demand. She was invited to appear on the March 2006 cover of Vanity Fair alongside Scarlett Johansson and Keira Knightley. She, on the other hand, declined when she discovered it would be a naked session.
During 2006 and most of 2007, she took a sabbatical from acting. She was approached with multiple lucrative film offers, which she declined.
In late 2007, she made her comeback to the big screen in the film ‘Married Life,’ in which she played Kay, a young widow chased by two much older men played by Pierce Brosnan and Chris Cooper.
For her, 2009 was a particularly fruitful year. She appeared in three films: the political thriller ‘State of Play,’ the romantic drama ‘The Time Traveler’s Wife,’ and the action mystery ‘Sherlock Holmes.’ In ‘Morning Glory,’ she played television producer Becky Fuller (2010). The plot of the film centred around Becky’s attempts to resurrect a struggling morning program and boost its ratings. The film was regarded as a vehicle for the actress’s star power.
She played Inez in Woody Allen’s ‘Midnight in Paris,’ which she starred in in 2011. Her performance was lauded by critics, and the film went on to gross a lot of money.
In 2012, she appeared in three films: ‘The Vow,’ ‘Passion,’ and ‘To the Wonder.’ ‘A Most Wanted Man’ and other nameless projects are among her next features.

Her portrayal of Regina George, an adolescent beauty in ‘Mean Girls,’ catapulted her to international recognition. She received numerous accolades, and the film was named one of the ‘Greatest Ever High School Movies’ by ‘Entertainment Weekly.’
Her performance in the romantic comedy ‘The Notebook’ was critically acclaimed, and she received numerous awards. In the film, she plays Ryan Gosling’s love interest. Since then, the picture has developed a cult following.

In 2004, she won the Gemini Award for Best Actress in a Featured Supporting Role in a Dramatic Series for her role in ‘Slings and Arrows.’
She has won multiple MTV Movie Awards, including one for ‘Mean Girls’ in 2005 for Best Breakthrough Female Performance.

She had previously been linked to fellow actors Ryan Gosling and Michael Sheen. She currently lives in Canada with her brother.
She is a committed environmentalist who supports a number of environmentally friendly social issues.

She was dubbed the “next Julia Roberts” at one point.
If she wasn’t an actor, she would have opened a restaurant because she enjoys cooking.