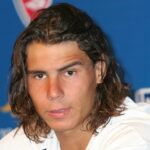 Rafael Nadal, better known to his followers as ‘Rafa,’ is a Spanish tennis player. When he was three years old, he began playing tennis. Despite having natural talent in both football and tennis, he chose to focus on the latter. He began by competing in junior tennis competitions before moving on to professional tennis and competing in ‘ATP’ tournaments. Before suffering major knee ailments that hampered his playing, he had held the number one rank for quite some time. Nadal is best known for his clay court skill, but he has also won matches on grass and hard courts. After Swedish player Mats Arne Olof Wilander, he is the second male player to win at least two ‘Grand Slam’ titles on all three surfaces. He is also the first tennis player in history to win ten consecutive ‘Grand Slam’ championships. Roger Federer, Björn Borg, and Pete Sampras previously held the record for winning the championships for eight consecutive years. Nadal’s on-court rivalries with Roger Federer, Novak Djokovic, and Andy Murray are well-known. This Spanish professional tennis player has won 19 ‘Grand Slam’ singles titles, five Davis Cup titles with Spain, two ‘Olympic’ gold medals, and numerous ‘ATP’ trophies.

Rafael Nadal Parera was born on June 3, 1986, in Manacor, Spain, to Sebastián and Ana Mara Parera, an entrepreneur. Mara Isabel, his younger sister, is his only sibling.

Miguel ngel and Toni, his uncles, were also professional athletes, with Miguel playing soccer and Toni tennis.
Rafael began playing tennis when he was three years old. He had already won a provincial tennis event for under-12 players in 1998.

Despite being a right-handed player, he was taught to play with his left hand by his uncle Toni.
He excelled in the game at the age of 12 and won multiple tournaments. He began playing professional tennis when he was 15 years old.

In 2002, the little child won his first ATP (Association of Tennis Professionals) match against Ramón Delgado. With this triumph, Nadal became the ninth tennis player under the age of 16 to win an ATP match.
In 2005, the brilliant player became the youngest player to qualify for the third round of the ‘Miami Masters’ competition since Boris Becker. He came close to defeating Roger Federer at the same tournament.
He competed in the ‘Davis Cup,’ winning the 2004 trophy by defeating Andy Roddick (3-2) in the final. He won 24 consecutive games on the clay court, shattering Andre Agassi’s record for most consecutive wins.

Rafael Nadal has also won the ‘Torneo Conde de Godó’ in Barcelona, as well as the ‘Monte Carlo Masters’ and the ‘Rome Masters.’ His most significant victory came in the 2005 ‘French Open’ finals, when he defeated Argentinian Mariano Puerta. In the same year, he rose to third place in the world rankings.
He defeated Roger Federer in all three finals of the ‘Dubai Duty Free Men’s Open,’ ‘Masters Series Monte Carlo,’ and ‘Masters Series Internazionali BNL d’Italia’ in 2006.

Federer and Nadal were paired against each other in the ‘French Open,’ and the match proceeded to a tie-breaker. Nadal won the tie-breaker, making him the first player in history to defeat Federer in a ‘Grand Slam’ final.
This prominent player won the ‘Indian Wells Masters’ after losing the ‘Australian Open’ and ‘Dubai Tennis Championship’ in 2007. ‘Masters Series Monte Carlo,’ ‘Open Sabadell Atlántico,’ and ‘Internazionali BNL d’Italia’ were among the tournaments he won.

Rafael overcame Federer at the ‘Masters Series Hamburg,’ but Federer defeated him again at the ‘French Open.’
In 2008, he advanced to the finals of the ‘Chennai Open,’ but was defeated by Russian player Mikhail Youzhny. He was also beaten in the finals of the ‘Australian Open’ by Frenchman Jo-Wilfried Tsonga.

In the 2008 Wimbledon final, Nadal faced Federer. Nadal won with a score of 9-7 after the action was delayed for many hours due to rain. After Rod Laver and Borg, he became the third man in tennis history to win both the Wimbledon and the French Open in the same season.
This exceptional player paired up with Marc López to win the doubles title at the 2009 ‘Qatar Open,’ which was held in Doha, against Nenad Zimonji and Daniel Nestor.

His next major victory came at the ‘Australian Open,’ where he overcame Federer once more, becoming the first Spaniard to win the tournament. He also took home the ‘Davis Cup,’ ‘Indian Wells Masters,’ and ‘Monte Carlo Masters,’ among other titles.

Nadal suffered a major knee injury at the ‘ABN AMRO World Tennis Tournament’ in Rotterdam. This had an impact on his tennis, and he had to withdraw from the ‘Barclays Dubai Tennis Championships.’
He had to withdraw from the ‘Australian Open’ due to a knee ailment after winning a couple sets in 2010. He went on to win more tournaments after his recovery, including the ‘Monte-Carlo Rolex Masters’ against Fernando Verdasco and the ‘Internazionali BNL d’Italia’ against David Ferrer.

He defeated Robin Söderling in the finals of the ‘French Open,’ claiming the ‘Grand Slam’ championship for the eighth time. After defeating Tomá Berdych at the ‘Wimbledon,’ he went on to win the tournament. This victory earned him the ‘Old World Triple,’ which is a collective moniker for the winners of the ‘Italian Open,’ ‘Wimbledon,’ and ‘French Open.’
At 2010, he defeated Novak Djokovic in the ‘US Open,’ completing his ‘Career Grand Slam.’
Rafael defeated Roger Federer in the 2011 ‘Mubadala World Tennis Championship,’ which was held in Abu Dhabi. He also defeated Olivier Rochus to win the ‘Davis Cup.’

Despite winning events such as the ‘Monte-Carlo Rolex Masters’ and the ‘Barcelona Open Banco Sabadell,’ he lost a number of titles. As a result, he was demoted to world number two.
This magnificent tennis player defeated Novak Djokovic in the 2012 ‘Monte-Carlo Rolex Masters,’ claiming his eighth trophy in a row. In tournaments like the ‘Barcelona Open’ and the ‘French Open,’ he continued to win.
He was defeated by Czech player Luká Rosol in the 2012 Wimbledon. He was forced to withdraw from the ‘US Open,’ ‘Olympics,’ ‘Cincinnati Masters,’ and ‘Rogers Cup,’ due to tendinitis in his knee,’ dropping his ranking to no. 4.
Rafael won the Brazilian Open, the Abierto Mexicano Telcel, the Barcelona Open Banco Sabadell, the French Open, the Mutua Madrid Open, and the Rome Masters in 2013. However, he was defeated in the ‘Wimbledon’ for the second time, this time by Belgian star Steve Darcis.

Nadal had a difficult year in 2014 due to a variety of health issues, including a back injury incurred at the ‘Australian Open’ finals. He subsequently went on to lose matches at the ‘Rio Open,’ ‘Indian Well Masters,’ ‘Miami Masters,’ and ‘China Open,’ among others. During these events, he sustained a wrist injury and later developed appendicitis.
In 2015, he lost the singles title against German player Michael Berrer at the ‘Qatar Open.’ He did, however, win the doubles title with Argentinian Juan Monaco. Nadal’s game suffered owing to injuries during the ‘Australian Open,’ when he lost to Tomá Berdych, but he won the clay-court title in the ‘Argentina Open,’ defeating Juan Monaco.
Nadal began 2016 by winning the ‘Mubadala Title,’ but then lost to Djokovic in the ‘Australian Open’ and the ‘Rome Masters.’ He bounced back by winning his second ‘Olympics’ gold medal in the men’s doubles with Marc Lopez, defeating Florin Mergea and Horia Tecau of Romania.

Rafael set and broke numerous records in 2017. He went on to win the ‘Madrid Open’ and the ‘French Open’ after losing to Roger Federer at the ‘Australian Open’ and ‘Miami Masters.’ It was his first ‘Grand Slam’ championship since 2014 when he won the ‘French Open.’ After losing in ‘Wimbledon,’ he went on to win the ‘US Open’ and the ‘China Open,’ becoming the oldest individual to reach the top spot at the end of the year at the age of 31.
Nadal withdrew from the ‘Mexican Open,’ ‘Miami Open,’ and ‘Indian Wells Masters’ during the 2018 season due to injuries. At the ‘Monte Carlo Masters,’ however, he successfully defended his championship. He went on to win the ‘Rome Masters,’ ‘French Open,’ and ‘Rogers Cup,’ among others.

He began the 2019 season with three straight victories at the ‘Australian Open,’ reaching the finals before losing to Novak Djokovic. In Rome, he defeated Djokovic to win his first tournament of the year, as well as his 12th ‘French Open’ championship. He won the ‘Rogers Cup’ and the ‘US Open’ title, which was his 19th ‘Grand Slam’ trophy, after losing at Wimbledon to Roger Federer.

The ATP Newcomer of the Year Award was given to this outstanding tennis player in 2003.
He was awarded the ‘Golden Bagel Award’ in 2005 after winning 11 consecutive sets without losing a single match. He earned the ATP Most Improved Player of the Year Award the same year.
The Laureus World Sports Award for Breakthrough of the Year was given to this Spanish tennis player in 2006.
In 2008, Rafael received the ‘Prince of Asturias Award for Sports,’ the ‘ITF World Tour Champion’ trophy, and the ESPY Award for ‘Best International Athlete.’

This prominent tennis player got the ‘Golden Bagel Award’ for the second time, the ‘Stefan Edberg Sportsmanship Award,’ and the ‘BBC Overseas Sports Personality of the Year’ during the 2009-10 season.
From 2011 to 2014, Nadal won significant awards such as the ESPY Award for Best Male Tennis Player and the Laureus World Sports Award. He received the latter award twice, for ‘Sportsman of the Year’ and ‘Comeback of the Year.’ In 2008, 2010, 2013, and 2017, he won the ATP Player of the Year award four times.

Rafael Nadal founded the ‘Fundación Rafa Nadal’ to aid children and young adults in 2007. He not only contributes to the growth of his hometown, but he also contributes to the development of other cities. He has also traveled to the Indian city of Anantapur in the state of Andhra Pradesh.

He has aided the ‘Vicente Ferrer Foundation’ in the development of the ‘Anantapur Educational Center.’ He also established the ‘Anantapur Sports Village,’ a tennis academy for disadvantaged youngsters.
This tennis player is well-known for his involvement in humanitarian and environmental concerns, particularly his engagement in Thailand’s ‘A Million Trees for the King’ campaign. The campaign aims to remember King Bhumibol by planting trees.

With the help of renowned journalist John Carlin, the sportsman’s autobiography, ‘Rafa,’ was released in 2011.
Football, golf, and poker are among the sports that this tennis star enjoys. In a game conducted in Monaco, he faced off against Vanessa Selbst, a well-known poker player.

In 2005, Nadal began dating Mara Francisca (Xisca) Perelló. The couple got engaged in January 2019, according to reports. Nadal and Mara married in October of this year.

While posing for photos, this great tennis player from Spain has a tendency of biting on his trophies.