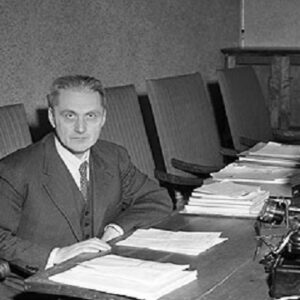 Ragnar Frisch was a well-known Norwegian economist who is best known for establishing the field of econometrics, which is defined as the area of economics that seeks to give empirical content to economic connections. He created the widely used term macroeconomics/microeconomics in 1933, and was one of the joint winners of the inaugural Nobel Memorial Prize in Economic Sciences in 1969 (with Jan Tinberger). Frisch is also widely considered as one of the modern science of economics’ founding fathers. He made several important contributions to economics, and his paper on consumer theory, published in 1926, contributed to establish Neo-Walrasian study. He was also a key figure in the development of production theory, or the study of the economic process of transforming inputs to outputs. He formed ‘The Econometric Group,’ an international society of academic economists interested in using statistical tools in their profession, in 1930. As of 2014, the Econometric Society had almost 700 Elected Fellows, making it one of the most prestigious academic organizations. He was the editor of the journal ‘Econometrica’ for more than two decades.

Ragnar Frisch was born on March 3, 1895, in Oslo, Norway, to Anton Frisch and Ragna Frederick Frisch. His father worked in the gold and silversmithing industry. His ancestors had relocated from Germany to the Norwegian town of Konsberg in the 17th century. Because his forefathers had worked in Konsberg’s silver mines for decades, Ragnar’s grandpa became a goldsmith and carried on the family tradition, as did Ragnar’s father.

Ragnar, like his father, was expected to carry on the family business, which led to him becoming a trainee at the David Andersen workshop in Oslo. However, he was admitted to the Royal Frederick University (University of Oslo) on his mother’s persuasion, while completing his training.

He graduated with a bachelor’s degree in 1919, majoring in economics. The next year, he passed the handicraftsman exams and began working as an associate in his father’s workshop.

Frisch got a fellowship from his institution in 1921, allowing him to pursue higher education in France and England. Frisch studied economics and mathematics there for three years before returning to Norway.

Ragnar Frisch had determined that economics was his true calling by the time he returned to Norway in 1923. His family’s business was struggling at the time, but Ragnar Frisch was more focused on his scientific study.

In 1925, he began teaching probability theory at the University of Oslo after publishing a few papers in the field. The following year, he received his Ph.D. with a thesis in mathematical statistics. In 1965, his lectures on production theory were eventually published as a book.

In 1926, he wrote his first seminal work, titled ‘Sur un problème d’economie pure.’ In his opinion, economics should follow the same route as other sciences in terms of theoretical and empirical quantification.

Frisch believed that ecometrics would only aid in achieving that goal. He believes that using mathematical techniques will help him develop a better understanding of economics.

After earning a scholarship from the Rockefeller Foundation, he moved to the United States in 1927. He met several other economists there, including Irving Fisher, Allyn Young, and Henry Schultz. He also published a paper that looked at the function of investments in understanding economic swings.

Wesley Mitchell, an American economist, popularized his work since he believed it introduced fresh and sophisticated methods.

Ragnar Frisch’s fellowship was extended, but despite the opportunity to travel to France and Italy, he had to return to Norway due to his father’s death. He subsequently had to devote a year to upgrading and financing his family’s business, as well as finding someone to run it for him.

After that, he returned to academia and was quickly hired as an Associate Professor of Statistics and Economics at the University of Oslo in 1928. Frisch became a full professor at the University in 1931 after writing several publications on statistics and economic metrology, as well as incorporating dynamics into economic analysis.

He became well-known throughout time for developing large-scale econometric modeling that was tied to both economic planning and national income accounting. Frisch worked on a wide range of macroeconomic problems, including trade cycle production theory and statistics theory.

Ragnar Frisch was a fervent believer in economics as a tool for resolving societal issues. However, the devastation produced by World War II and the Great Depression had a profound impact on him, and he came to the opinion that economics and politics alone will never be able to fix the world’s problems.

He claimed that societal reform was also required. However, he was forced to withdraw his opinion due to others’ misreading of his statement.

Frisch also served as an advisor to the government on economic and planning matters in his later years, though he was never given an official position. The Norwegian government benefited greatly from many of his economic techniques and methods.

He co-invented the renowned Frisch-Waugh theorem with Frederick Waugh. According to this theorem, determining the coefficients in a normal regression model using ordinary least squares is equal to using projection matrices.

‘The Relationship between Primary Investment and Reinvestment’ (1927), ‘Theory of Production’ (1965), and ‘Econometrics in the World of Today’ are only a few of Ragnar Frisch’s major articles (1970).

In 1969, Ragnar Frisch and Jan Tinbergen, a Dutch economist, shared the Nobel Memorial Prize in Economic Sciences for inventing and implementing dynamic models for the analysis of economic processes.

Ragnar Frisch had a daughter named Ragna with Marie Smedal, whom he married in 1920. After Marie’s death in 1952, he married Astrid Johannsen, a childhood acquaintance. This relationship continued till his death.
He died in Oslo, Norway, on January 31, 1973.

The Frisch Medal, which is named after him, is given out every two years by ‘The Econometric Society’ for outstanding empirical or theoretical research work published in the journal ‘Econometrica’ in the previous five years. It is regarded as one of the top three economic rewards in the world.

Ragnar Frisch’s net worth is $2 million.