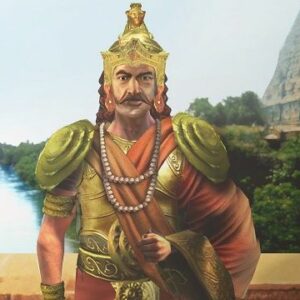 Raja Raja Chola I was one of Tamil history’s greatest emperors. He achieved popularity by restoring the Chola Empire’s splendor and establishing it as a powerful and strong state. He initiated a series of conquests in South India shortly after his accession, conquering the kingdoms of Pandyas and Cheras. By continuing south, he invaded Ceylon (Sri Lanka), establishing the Chola Empire’s century-long dominance of the entire island. The southern military campaigns were followed by conquests in the north and northeast, with the capture of Gangapadi, Nolambapadi, Tadigaipadi, Vengi, and Kalinga, as well as victories over the Western Chalukyas in particular. His empire spanned the northeastern state of Kalinga to the southern state of Sri Lanka. Above all, he was instrumental in constructing an equitable administrative structure and granting authority to his regional princes and lords. Apart from his wars and conquests, he is famous for erecting one of South India’s greatest and most impressive architectural structures. Brihadeeswarar Temple in Thanjavur, also known as Rajarajeswaram or the ‘Big Temple,’ is renowned for its delicate sculptures and exquisite craftsmanship. He was followed by his son, Rajendra I, who enhanced the Chola Empire’s glory by invading the Maldives, the Malabar Coast, and the remaining areas of Sri Lanka.

Accession to the Throne and Reign

He attacked the combined armies of the Pandyas and Cheras during his early conquests, though there is no evidence of any campaign during the first eight years of his reign.
With Thanjavur as his capital, he spent the first few years strengthening his army and preparing for military excursions.

In 991, with the assistance of professional warriors hired from Kerala, the Sinhalese monarch Mahinda V’s army revolted against him, causing him to flee south to Ruhana.
While he desired to rule the entire island of Ceylon, he was unable to conquer the southern area of Ruhana, which was eventually captured by his son, Rajendra.

In 994, he launched his first successful war, annihilating the Chera King Bhaskara Ravi Varman Thiruvadi’s navy at Kandalur harbor.
Between 998 and 999, he conquered Gangapadi (Gangawadi) and Nurambapadi (Nolambawadi), in modern-day Karnataka, establishing authority over the entire Ganga nation.

With the addition of southern regions to his Empire, he traveled north in search of additional conquests, during which he was perpetually at war with the Western Chalukyas.

Rajendra, his son, led the 900,000-strong army in killing Brahmans, women, and children, while army elephants were deployed to further devastate the banks of the River Tungabhadra.
In 999, he invaded the Vengi kingdom and deposed its ruler, Jata Choda Bhima, appointing Saktivarman as the Eastern Chalukya king in his place.

Following his exit, Bhima attacked and took Kanchi again; however, he swiftly drew him out of Kanchi, securing Saktivarman’s crown in 1002. Vengi eventually became a satellite kingdom of his dominion.
Soon after capturing Vengi, Rajendra moved out to conquer Kalinga, defeating its monarch, Bhima, who had fled Kanchi following Raja Raja’s expulsion.

Under the command of his son, Rajendra, the province of Udagai, an important stronghold of the Pandyas, was attacked and captured, and added to the Chola Empire probably around 1008.
The naval conquest of the ‘ancient sea islands numbering 12,000′ was very certainly one of his final conquests, which also included the invasion of Maldives.

While governing the Bay of Bengal region, he transformed it into Chola Lake, with Nagapattinam serving as the Cholas’ principal port and, possibly, fleet headquarters.
Toward the end of his reign, he changed his focus from conquests to domestic administration, converting all territories ruled by lords and petty princes into dependent officials who were constantly monitored.

He appointed local government officials and established centralized mechanisms for auditing and controlling village assemblies and other public organizations without impinging on their autonomy.
He patronized “This Marathi Attu Ainootruvar,” a historic Tamil trading association dedicated to promoting international trade around the Indian Ocean, from Arabia to Malaya.

Apart from being a devout Saivism Hindu, he had the utmost regard for other religions and faiths, as seen by his construction of Vishnu temples and the Buddhist Chudamani Vihara for Sri Maravijayatungavarman, the ruler of Srivijaya.

He took Virinam’s port by deposing the Pandyas and capturing their ruler Amarbhujanga. To commemorate the occasion, he adopted the moniker ‘Mummudi-Chola,’ which translates as ‘three crowns’ – Chera, Chola, and Pandya – worn by the Chola ruler.

With no one to govern Anuradhapura following the expulsion of its ruler, he seized northern Ceylon in 993 and destroyed the 1400-year-old Sinhala capital, renamed Polonnaruwa Jananathamangalam.
Despite his massive force, he was unable to seize the Chalukyan capital, Manyakheta, which resulted in the southern banks of Tungabhadra being a border between the Cholas and the Chalukyas.

Within 14 years of his reign, he conquered the Pandyas, Bellary, Eastern Mysore, Tadigaipadi, Vengi, and Coorg.
He constructed the magnificent Siva temple in Thanjavur, also known as Rajarajeswaram, Brihadeeswarar Temple, and ‘Big Temple,’ which is now a UNESCO World Heritage Site and is included in the ‘Great Living Chola Temples.

According to documents and inscriptions, he had at least 15 wives, apart from Vaanathi or Thiripuvana Madeviyar, Princess of Kodumbaalur, who bore him his sole son Rajendra I.

At least three daughters are known to him: Kundavai, who married Chalukya Prince Vimaladithan, Mathevalzagal, and Chandramalli.
Raja Kesari Varman, Raja Raja Devar, Peruvudaiyar, and Raja Raja the Great were some of his monikers.

Chola Rajendra I am reported to have a net worth of $3 million and earn my primary income as a politician. We lack sufficient evidence regarding Rajendra Chola. I automobiles, Rajendra Chola I way of life.