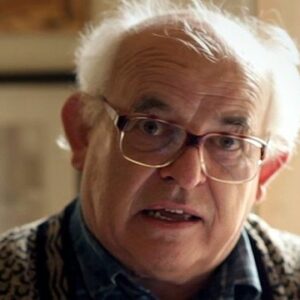 Ralph Steadman is a cartoonist, artist, and novelist from England. His passion for sketching and cartoons was sparked when he initially started working at an advertising firm. He studied the art in a variety of British institutions, including Percy V. Bradshaw’s correspondence school, East Ham Technical College, and the School of Printing and Graphic Arts. For many years, Steadman provided his political, dark-humored, and satirical cartoons to newspapers in England and America, including the Kemsley Newspaper Group, the Daily Mail, and the New York Times. His collaborations with American writer Hunter S. Thompson are widely regarded as his most popular works, including ‘Fear and Loathing in Las Vegas,’ ‘Fear and Loathing on the Campaign Trail ’72,’ and ‘Kentucky Derby’ for Scanlan, among others. Because of his forthright approach on politics and political people, his cartoons were considered rebellious and gloomy, but by the early 1980s, he had lost interest in political cartooning, believing that there was little substance left in international politics. He went on to write and illustrate his own novels, including ‘Alice in Wonderland,’ ‘I Leonard,’ and ‘Doodaa,’ among others. He has received significant accolades such as the Certificate of Merit from the American Society of Illustrators, the W H Smith Illustration Award, the BBC Design Award, and others.

Ralph Steadman was born into a lower-middle-class family in Wallasey, Cheshire, to Lionel Raphael Steadman, a commercial traveler selling women’s goods. His mother worked in a store as a cashier. Steadman went to Abergele Grammar School, but by the time he was sixteen, he had quit because he couldn’t stand his headmaster’s overwhelming control.

He went to work for De Havilland, an aircraft manufacturer. Steadman became dissatisfied with the industrial life after only a few months and joined Woolworth’s as a trainee manager. He was engaged by McConnell’s Advertising Agency in Colwyn Bay in 1954.

During his National Service in the Royal Air Force in Britain from 1954 to 1956, Steadman continued to study Percy V. Bradshaw’s cartooning correspondence course, since his passion in illustration had expanded. The course was paid for by his parents.

He began sketching in 1955 and sent his work to ‘Punch’ every week, but it wasn’t until the following year that his first cartoon was published in the Manchester Evening Chronicle. ‘Nasser and the Suez Crisis’ was the subject of the cartoon.

Steadman began working as a cartoonist for the Kemsley Newspaper Group in 1959. He produced editorial cartoons as well as a weekly panel about a fictional adolescent girl dubbed ‘Teeny.’ 8 At the same time, he took part-time painting classes at East Ham Technical College from Leslie Richardson. He used to go to college after finishing his work at Kemsley at 10 a.m. and finishing by 3 p.m.

Steadman began freelancing after being fired from Kemsley and submitted cartoons to Punch, the Daily Sketch, and the Daily Telegraph. Steadman sent in a sketch titled “Plastic People” to Private Eye, for which the editor paid him 5 and a letter reading, “More power to your elbow.” It was given a double-page feature in the magazine.

Leslie Richardson persuaded him to study at the London School of Printing and Graphic Arts from 1961 to 1965. It was partially due to the fact that he wasn’t performing well commercially and was being overshadowed by his ex-friend and rival Gerry Scarfe.

In 1966, after finishing his studies, Steadman was employed by the Daily Mail and given a considerable quantity of money as well as an E-type Jaguar. He was appointed Artist-in-Residence at Sussex University the following year.
He worked for Rolling Stone for a spell in 1970 before joining Scanlan’s Monthly, an American leftist publication. Steadman completed the illustrations for Hunter S. Thompson’s book ‘Fear and Loathing in Las Vegas’ the following year.

By the end of 1970, Steadman had returned to London to cover the General Election for The Times, where he was just the paper’s second political cartoonist. Steadman was a political cartoonist for the New Statesman from 1976 until 1980. His drawings got more primitive as his style altered. He worked at the National Theatre and wrote to magazines such as Rolling Stone and the New York Times during this time.

Ralph and Bernard Stone collaborated on children’s books, including the famous Emergency Mouse (1978) and Inspector Mouse (1979). (1980). Finally, Quasimodo Mouse completed the triptic (1985). Oddbins, a wine dealer, approached Ralph in the 1980s and asked him to create their wine catalogues. Many of his own novels, such as ‘Sigmund Freud,’ ‘The Big I Am about God,’ and ‘Doodaa,’ were written and drawn by him.

In 1989, Steadman collaborated with composer Richard Harvey on an oratorio for an Eco-opera titled “The Plague and the Moonflower.” Through the metaphorical love tale of the plague demon and the moonflower, it investigates the contamination of the Earth.

In 1990, The Royal Opera House requested Ralph to develop a new ballet based on Arthur Miller’s ‘The Crucible.’ Oily inks were pored, flung, and splattered all over the outfits by Steadman himself. Charlie Paul directed ‘For No Good Reason,’ a documentary on Steadman’s career, which premiered at the 2013 Toronto International Film Festival. The film took 15 years to make.

‘Fear and Loathing in Las Vegas’, ‘Fear and Loathing on the Campaign Trail ’72’, ‘Kentucky Derby’ for Scanlan, and ‘Honolulu Marathon’ for Running are among Steadman’s most popular works with American writer Hunter S. Thompson.

Steadman resides in Kent, England, with his wife and has his own vineyard in his backyard.

Ralph Steadman is an artist from the United Kingdom with an estimated net worth of $8 million. In May 1936, Ralph Steadman was born in Wallasey, Merseyside, England. Also is most known for his collaborations with American author Hunter S. Thompson, and he paints, caricatures, draws, and cartoons. He studied printing at the London College of Printing and freelanced for The New York Times, The Daily Telegraph, and Rolling Stone, among other publications.

With a shot of the highly endangered Northern Bald Ibis, he contributed to BirdLife International’s Preventing Extinctions initiative.