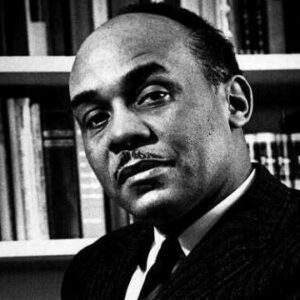 Ralph Waldo Ellison, an African American novelist, is best known for his novel “Invisible Man.” He was also a scholar and literary critic who has written numerous writings on important social and political topics. Despite his lowly beginnings, he was able to establish a niche for himself in the literary world and receive numerous awards for his work. His work has been hailed as a seminal study on the complexities of American culture, particularly in the context of African-American communities. Ralph was also a big fan of jazz, and his passion for music can be seen in his work. His story is basic but rich, with rhymes and lyrics from popular songs scattered throughout. His writing gives the reader with a strong message that is delivered in a pleasant manner. His works bring readers’ attention to the injustices that exist in society and force them to become more cognizant of the myriad issues that plague it. Ralph, in addition to his writing and music, taught at a number of universities across the United States.

Ralph Ellison, the second of three children born to Lewis Alfred Ellison and Ida Millsap, was born on March 1, 1914, in Oklahoma City. Alfred, his older brother, died soon after birth, while Herbert Maurice, his younger brother, was born in 1916.
His father intended his kid to be a poet when he grew up, so he named him after the famous poet Ralph Waldo Emerson.
Lewis Alfred Ellison was a small-business owner and a construction foreman. He died when Ralph was only two years old, after undergoing surgery to treat internal stomach damage sustained in a construction accident.
Ida was left to look after the family after Lewis’ death. She had to return to Oklahoma in quest of work after sending her children to her brother in Gary, Indiana.
Ralph had to take on financial responsibilities early in life and worked as a shoe shine boy, a dentist’s assistant, and a busboy, among other odd jobs.
In 1931, he graduated from ‘Douglass High School,’ where he also played football for the school. Ellison used the money he had saved to buy a trumpet, take music lessons, and perform with local artists after graduating.
On his second attempt, Ellison was accepted to Tuskegee University in 1933. As a trumpet player, he was a member of the school’s orchestra.
He began working as a desk clerk at Tuskegee University’s library in 1934, where he had the opportunity to read extensively the works of authors such as James Joyce, Gertrude Stein, and T.S. Eliot.
He dropped out of Tuskegee after his third year due to financial hardship. He relocated to New York City to make some money and promised himself that he would return to finish his degree, but he never did.
Ellison was orphaned when Ida died in 1937 in Dayton, Ohio.

Ralph Ellison studied sculpting and photography after arriving in New York City in 1936. He met a number of notable figures, including Langston Hughes, a well-known black author at the time, author Richard Wright, and African-American artist Romare Bearden.
Ellison was encouraged to write fiction by Richard Wright, for whom he had written a book review. His first published story, ‘Hymie’s Bull,’ was inspired by his uncle’s trip to Tuskegee aboard the railroad.
He wrote over 20 book reviews and articles for periodicals such ‘The New Republic,’ ‘Saturday Reviews,’ ‘The New Masses,’ ‘Antioch Review,’ and ‘New Challenge’ between 1937 and 1944.
Meanwhile, he began working for the ‘Federal Writers’ Project’ as a writer and researcher, and then spent a year as the managing editor of ‘The Negro Quarterly.’
He worked as a cook in the United States Merchant Marine for two years during World War II, from 1943 to 1945. He began writing ‘Invisible Man’ in 1945, following the end of World War II. Seven years later, it was published.
In 1955, he traveled to Europe and lectured about his ideas in Rome. He moved back to the United States in 1958 and began teaching Russian and American literature at Bard College.
While working on his second novel, ‘Juneteenth,’ he began teaching at several universities, including Rutgers University and Yale University. Between 1970 to 1979, he lectured at New York University.

Ralph Ellison’s novel “Invisible Man” is a work of art. In 1952, it was the sole novel he wrote during his lifetime that was published. It soared to the top of the best-seller list almost immediately, where it remained for 16 weeks!
He released the ‘Shadow and Act,’ an anthology of writings, in 1964. In 1986, ‘Going to the Territory,’ a second collection of articles, was released. Under the editorship of John F. Callahan, his second novel, ‘Juneteenth,’ was released in 1999. This was a 368-page abridgement of Ellison’s original 2000-page book.

In 1953, for his novel “Invisible Man,” Ellison won the National Book Award for Fiction.
He was inducted into the American Academy of Arts and Letters, and he got two President’s Medals as well as a State Medal from France.
He has an honorary doctorate from Harvard University.
He was the first African-American to be inducted into the Century Association.

Rosa Araminta Poindexter was Ralph Ellison’s first wife, and they married in 1938. After five years, the couple divorced. He admitted to his wife that he had an affair with Sanora Babb during their marriage.
Fanny McConnell, his second wife, married him in 1946. She helped him make ends meet while he wrote on his debut novel, ‘Invisible Man,’ and she also typed the manuscript for him.
Due to pancreatic cancer, he passed away on April 16, 1994, at the age of 80.

Ellison was a sound technologist who created electronic devices such as stereo boxes in addition to writing, sculpture, and music. He also penned a number of novels about his passion for jazz.