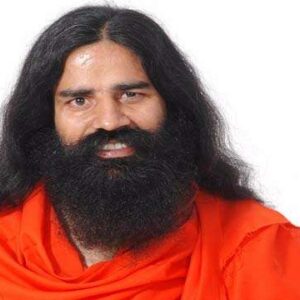 Baba Ramdev is a well-known yoga teacher and spiritual guru from India. He is well-known in India for popularizing yoga through television and his large yoga camps. Thousands of people attend his yoga camps, and he has taught yoga to celebrities such as Amitabh Bachchan and Shilpa Shetty. Ramkrishna Yadav was born in the Indian state of Haryana and became interested in yoga at a young age. When he was a young adult, he recognized he wasn’t cut out for the worldly life and embraced Sanyas (monastic life), adopting the name Baba Ramdev. He spent many years studying ancient Indian scriptures and practicing extreme self-discipline and meditation after becoming a ‘Sanyasi.’ During this time, he began giving free yoga instruction to his followers, seeing the need of popularizing this ancient technique among Indians. He went on to found the Divya Yoga Mandir Trust in 1995 and has since become a well-known yoga master. When he began appearing in a television program geared at promoting yoga, his fame skyrocketed, and he attracted a significant following. He is also the founder of Patanjali Yogpeeth, a non-profit organization dedicated to promoting yoga and ayurveda.

Ramkrishna Yadav, the son of Ram Nivas Yadav and Gulabo Devi, was born in Alipur village, Mahendragarh district, Haryana, India, in 1965. Gulabo Devi and Ram Nivas Yadav
He attended a school in Shahjadpur until the ninth grade. He was drawn to yoga from a young age and enrolled in Khanpur’s Arya Gurukul, where he studied Sanskrit, Indian texts, and yoga.
He was profoundly affected by Aurobindo Ghosh’s work ‘Yogik Sadhan.’ He made the decision to give up his worldly habits and adopt Sanyas (monastic living). Swami Shankerdevji Maharaj admitted him into the ascetic order, and after becoming a sanyasi, Ramkrishna Yadav took the name “Baba Ramdev.”
He subsequently moved to Jind district and enrolled at the Kalva gurukul, where he earned a postgraduate (crya) degree in Sanskrit Vykarana, Yoga, Darana, Vedas, and Upanishads.

While remaining at the Kalva gurukul, he began teaching yoga to peasants throughout Haryana. Later, he is thought to have traveled to the Himalayas, where he spent several years.
He subsequently went to Gurukul Kangri Vishwavidyalaya in Haridwar, Uttarakhand, to study ancient Indian scriptures. He was also a strong believer in self-discipline and meditation.
In 1995, Baba Ramdev founded the Divya Yoga Mandir Trust to promote yoga. He was accompanied by Acharya Karamveer and Acharya Balkrishna in this endeavor. Acharya Karmaveer specializes in yoga and Veda, while Acharya Balkrishna is an ayurvedic physician. The trust’s headquarters are in Haridwar’s Kripalu Bagh Ashram. At this ashram, Baba Ramdev primarily teaches yoga.
Baba Ramdev focuses on the Pranayama style of yoga. Six breathing exercises are performed in a precise order as part of the program. The majority of other yoga gurus emphasize the practice of asanas (yoga postures), whereas Baba Ramdev emphasizes breathing exercises.
He became a well-known yoga teacher, and in 2003, he began hosting a yoga-related series on Aastha TV. The show was a huge hit with the audience, and he earned a significant following as a result.
Thousands of people, including celebrities, flocked to his yoga camps to learn about the ancient science. He began teaching yoga in other countries after becoming well-known in India, including the United Kingdom, the United States, and Japan.
In Haridwar, he established the Patanjali Yogpeeth for the promotion and practice of yoga and ayurveda. There are also Ayurvedic medications created there, as well as treatments for all ages and residential accommodation. Patanjali Yogpeeth has two campuses in India (Patanjali Yogpeeth-I and Patanjali Yogpeeth-II), as well as campuses in the United Kingdom, the United States, Nepal, Canada, and Mauritius.
Baba Ramdev participates in political campaigns as well. In 2011, he participated in the Jan Lokpal agitation alongside campaigners such as Anna Hazare, Ram Jethmalani, Kiran Bedi, Arvind Kejriwal, and Swami Agnivesh to fight corruption. Baba Ramdev launched the Bhrashtachar Mitao Satyagrah at Ramlila Maidan in New Delhi on June 4, 2011. He also started a fight against money laundering.
Baba Rambev is also well-known for igniting debates with his claims and statements. His statements that the status of AIDS patients may be healed through yoga and ayurvedic pharmaceuticals supplied by his Divya Yoga Mandir Trust, as well as his opinion that homosexuality is a mental problem that can be “treated,” have garnered him a number of critics.

Baba Ramdev is best recognized for spreading yoga to the general public in India. In Haridwar, he founded Patanjali Yogpeeth, one of India’s major yoga institutes. The institute’s primary goal is to promote and improve yoga and ayurveda. It is also the location of Patanjali University.

In 2007, the Kalinga Institute of Industrial Technology in Bhubaneswar gave Baba Ramdev an Honorary Doctorate degree in honor of his efforts to popularize the Vedic science of Yoga. In a ceremony presided over by Nobel Laureate Richard Ernst, he was awarded the degree.
Maharashtra Governor K. Shankaranarayanan presented him with the Sri Chandrashekharendra Saraswati National Eminence Award in 2011.