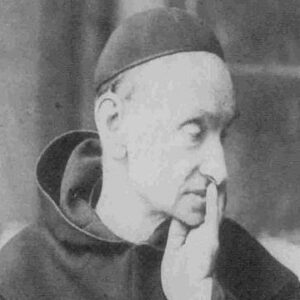 For thirty years, Father Raphael of Saint Joseph Kalinowski served the Discalced Carmelite order, seeking to bring Eastern Christians together amid a period of tension and suspicion. He was a pious leader among his Carmelite brethren, and his desire for reconciliation brought him to the confessional of his flock for hours at a time. After the Russians suppressed the Carmelite order, Father Raphael erected many Carmelite monasteries throughout Poland. Raphael’s life was built on St Theresa’s words, “God alone suffices,” as a defender of Christian unity. He is revered not only as a religious hero, but also as a patriot, for demonstrating his patriotism while fighting the Russians during the Polish resistance. Father Raphael’s unselfish dedication to the Church, his community, and God who “alone suffices” is a monument to his love for God and country. Raphael KalinowskiPope John Paul II canonized him as a saint in 1991.

On September 1, 1835, he was born as Joseph Kalinowski in Vilna (now Lithuania). Raphael’s mother, Josephine, died shortly after giving birth, leaving Raphael and his older brother, Victor, to raise him.

Andrew Kalinowski married Sophie, Josephine’s sister, and they had three more children. Sophie then passed away. Raphael’s father had four more children after marrying for the third time, this time to Sophie Puttkamer, making him the second-eldest of nine siblings.

Raphael’s father was a mathematics professor at Vilnius’ Institute of Nobles, and he enrolled Raphael as a student when he was eight years old. Raphael was influenced by Andrew’s religious zeal from an early age, though he did not pursue the ministry until much later.

Raphael excelled in his early schooling under his father’s tutelage and graduated with honors from the Institute of Nobles in 1850.
He moved to Russia immediately and studied agronomy at the Institute of Agronomy from 1851 to 1852.
Raphael changed occupations in 1853 and enlisted in the Russian Army after completing his studies at the Nicholayev Engineering Academy.

A Career of Raphael Kalinowski

Raphael was promoted to Full Lieutenant and began work on the Kursk-Kiev-Odessa Railway after completing his schooling at the Nicholayev Engineering Academy and qualifying from the Russian Engineering Corps in 1857.

In 1860, he was commissioned as Engineer Superintendent for Maintenance at Brest-Litowski after working on the Kursk-Kiev-Odessa Railway. In 1862, he was appointed Captain of the General Staff.
Raphael initiated and continued a Sunday school program while working at the Brest-Litowski fortification, demonstrating his pious background and religious inclinations.

Raphael resigned from his commission in 1863 after becoming sympathetic to the Polish insurgency and joined the movement as Minister of War. From Warsaw, he led the Vilna region’s resistance against Russian control.
Raphael was captured and sentenced to death by Russian authorities a year later, in 1864. In an old Dominican monastery, he was imprisoned.

On July 29, 1864, Russian authorities remitted Raphael’s sentence to ten years of forced labor, fearing that the insurrection would gather around his death as a martyr. He landed in Usol, Siberia’s salt mines, after a nine-month journey.

In 1868, he was transferred to Irkutsk, where he worked for the Russian Geographical Company conducting meteorological research.
On April 23, 1874, he was liberated and returned to Warsaw. Exiled from his homeland, he relocated to Paris and began tutoring Prince Czartoryski.

Until 1877, when he entered the Carmel of Linz as “Brother Raphael of St. Joseph,” he tutored the prince. He had met and been deeply affected by Father Augustine Mary of the Blessed Sacrament in the months leading up to this. Father Augustine was a Discalced Carmelite who was previously known as Hermann Cohen, an excellent Jewish convert and musician, before his conversion.

Raphael was consecrated as a priest on January 15, 1882, in Czerna, where he also served as Prior.
In Premislia (1884) and Leopoli (1885), he established monasteries (1888). Raphael was appointed Visitator and Provincial Vicar of these monasteries in 1899.
Raphael documented Mother Theresa Marchocka’s activities and life from 1892 until his death, and campaigned for her beatification.

The Carmelite monasteries and convents of Vilna, Warsaw, Leopoli, and Cracow were documented by Raphael Kalinowski.
He wrote a biography of his buddy Hermann Cohen, a Discalced Carmelite who became famous as a gifted Jewish pianist before converting.

He translated St. Therese of Lisieux’ autobiography, ‘The Story of a Soul,’ into Polish. This work has had a huge impact on the Christian community and has been translated into dozens of languages since it was first published.
At the behest of his superiors, he wrote his ‘Memoirs 1805-1887,’ which detailed his life as a Discalced Carmelite and ecumenical Christian leader.

Raphael died of tuberculosis at Wadowice, Poland, on November 15, 1907. He was laid to rest in the cemetery of the Czerna Convent.
Saint Raphael’s Feast Day is November 19th, according to the Catholic Church.
Saint Raphael has been named the Patron Saint of the Polish Nobles League by Canada.

estimated net worth of Raphael Kalinowski is unknown.

Since the order’s founder, Saint John of the Cross, was canonized in 1675, Father Raphael of Saint Joseph was the first Discalced Carmelite monk to be canonized.
Father Raphael was canonized by Pope John Paul II, who was born in the same village where he died.