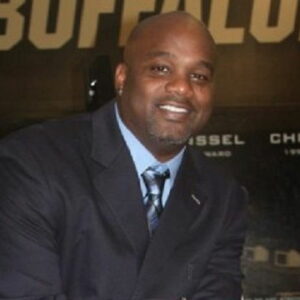 Rashaan Salaam played American football and is most known for his time as a running back with the Chicago Bears and Cleveland Browns in the NFL in the 1990s. He was a member of the Colorado Buffaloes football team and participated in football at the University of Colorado as well. Salaam, a first-team All-American who received overwhelming praise, ran for 1,000 yards as a rookie in the NFL. He was the 1994 Heisman Trophy and “Sporting News Player of the Year” winner. Throughout his career, he also received the Doak Walker and Walter Camp Awards. In 1995, the outstanding American football player also received the honor of being named “NFC Rookie of the Year.” Additionally, he was honored with a spot in the Colorado University Athletic Hall of Fame. Salaam sadly passed away in December 2016 at the age of 42, apparently by suicide.

Rashaan Salaam participated in football games for the Colorado Buffaloes of the University of Colorado from 1992 to 1994. He had one of the best individual seasons in college football history as a junior in 1994, rushing for more than 2,000 yards in a calendar year. Salaam was a first-team All-American in college and the recipient of the renowned Heisman Trophy.

A career in the Profession

Salaam was a Chicago Bears player from 1995 to 1997. His performances during his stint with the squad were hampered by injuries and drug use. Only 608 combined yards were produced by Salaam in his final two seasons with the Bears. After that, he played for the Cleveland Browns and Green Bay Packers in 1999.

The American football player later participated in the XFL in 2001 for the Memphis Maniax, but his season was cut short by injury.

He made his final shot at an NFL career in 2002 and began training at the Cris Carter Speed School after his career had so far failed terribly. Salaam was signed by the San Francisco 49ers in 2003. Sadly, the team fired him in August of that year. He then signed on with the Canadian Football League’s (CFL) Toronto Argonauts in February 2004. This time, he was suspended as well, which essentially terminated his career in May.

Teddy Washington, who subsequently changed his name to Sulton Salaam after converting to Islam, gave birth to Rashaan Salaam on October 8, 1974, as Rashaan Iman Salaam in San Diego, California. Jabali Alaji and Atiya Henry were his two siblings. Salaam attended the University of Colorado after finishing his education at the La Jolla Country Day School.

He was discovered dead in a park on December 5, 2016, and there was a message close to his body. An autopsy revealed that the football player committed suicide with a gunshot, which was the cause of death. The medical community also wanted to perform some neuropathological studies on his body, but his family refused since Islam forbids defiling the remains of the deceased.