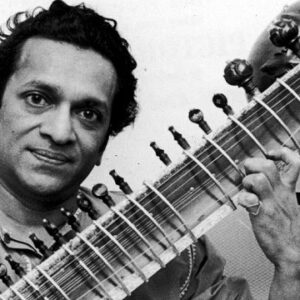 Often referred to as the “godfather of global music” and the “ambassador of Indian music” throughout the world, Pandit Ravi Shankar is one of the twentieth century’s most prolific and influential music maestros. Throughout his life, he was bestowed with an infinite number of accolades and distinctions and acted as the sole conduit for the fusion of eastern and western musical genres. As a child growing up on the banks of the Ganges, he was hailed as a musical enchanter who captivated his audience with the brilliance of his singular style and compositions. Divine providence drew him to the realm of music, and he went on to acquire extensive training from some of the finest music masters of his generation, honing his remarkable abilities. He was, without a doubt, the most significant messenger of Indian music around the world. He was a wonderful performer, a passionate teacher, and a majestic composer. Pandit Shankar was respected for his musical ability and is credited with blending aspects of western and Indian classical euphony, so ushering in a new era of music. As the recipient of India’s highest civilian honor, the Bharat Ratna, his life has always served as an enormous source of inspiration for budding singers worldwide. Scroll down to learn about every facet of Pt. Ravi Shankar’s distinguished life.

Pandit Ravi Shankar was born in Varanasi as Robindro Shankar Chowdhury, the son of Shyam Shankar, a Middle Temple lawyer and Sanskrit scholar, and Hemangini Devi. His father was a lawyer in England, where he married for the second time and did not see his son until he was eight years old.He visited Paris with his brother Uday Shankar and his dance group, ‘Compagnie de Danse et Musique Hindou’, when he was 10 years old and became a member of the group within a few years.

He mastered the art of dancing and also began playing many musical instruments with deftness throughout his involvement with this group.Throughout the 1930s, while visiting Europe and America with his brother, he began to absorb parts of western music, which he eventually incorporated into his fusion pieces.Around this period, Ravi Shankar began to thrive as a musician under the instruction of Allauddin Khan, a notable musician of the era who joined the ensemble as a soloist. He later abandoned his brother’s group and joined Khan’s in Maihar (Madhya Pradesh, India) in 1938, at Khan’s request.

After settling in Maihar, he immersed himself entirely in music, achieving a high level of dexterity on Indian musical instruments such as the sitar and surbahar. Additionally, he received thorough training in ragas and Indian classical music forms such as dhrupad, dhamar, and khyal at this institution.He made his public debut in 1939 in a Jugalbandi (duet) with Ali Akbar Khan, to rousing applause from the crowd.

By 1944, his studies under Allauddin Khan was complete, and he relocated to Mumbai in search of work. He began his career as a ballet composer at the ‘Indian People’s Theatre Association’ in this city.He also began recording for HMV India and worked as a music director for All India Radio from 1949 until 1956. Around this period, his score for Satyajit Ray’s film ‘Appu Trilogy’ garnered him widespread international acclaim.

Yehudi Menuhin, an internationally renowned violinist, invited Ravi Shankar to perform Indian classical music in New York City in 1955. However, due to personal circumstances, Pandit Shankar was forced to decline the invitation.
Ali Akbar Khan played in his place and earned widespread acclaim, which inspired Ravi Shankar to resign from AIR in 1956 and go on a musical tour of the United Kingdom, Germany, and the United States of America.

While in London, he produced his first LP album, ‘Three Ragas,’ in 1956 and was invited to perform at the United Nations and UNESCO music festival’s tenth anniversary celebrations in Paris a few years later. From 1961 to 1965, he travelled Europe, the United States of America, and Australia and was offered multiple opportunities to create music for non-Indian films, the first Indian to do so. He opened his Kinnara School of Music in Mumbai a year later.

He was asked to perform at the Monterey Pop Festival in 1967, the same year he won the Grammy Award for Best Chamber Music Performance with Yehudi Menuhin for West Meets East. This year, his Kinnara School of Music expanded internationally with the establishment of its first overseas branch in Los Angeles, California. He also taught music at City College of New York, the University of California, Los Angeles, and numerous other campuses as a guest professor. He was named chair of the Department of Indian Music at the California Institute of the Arts in late

1970. He also composed a concerto for sitar and orchestra for the London Symphony Orchestra that year. During the early 1970s, as interest in Indian music waned, he performed at the charity event The Concert for Bangladesh in August 1971. This concert record became a worldwide blockbuster sensation, earning Ravi Shankar his second Grammy Award. He cooperated with George Harrison of ‘The Beatles’ throughout the 1970s, recording ‘Shankar Family & Friends’ in 1973. He returned to Europe with ‘Music Festival from India,’ an Indian classical music revue, and returned to North America a year later to a less than enthusiastic reception.

His health began to deteriorate as a result of his overworked schedules, and he suffered a stroke in 1974 while visiting the city of Chicago. However, following his recovery, he toured and taught throughout the 1970s and 1980s.
Following the release of his second concerto in 1981, he went on to create the music for the Hollywood film ‘Gandhi,’ for which he was nominated for an Academy Award for Best Original Music Score.He also composed a dance drama named ‘Ghanashyam’ in 1989 and collaborated with Philip Glass on the album ‘Passage’ a year later.He continued giving concerts until the late 1990s and was appointed Regent’s Lecturer at the University of California, San Diego in 1997.

This great musical master delivered his final concert alongside his daughter Anoushka on 4 November 2012 at the Terrace Theater in Long Beach, California.Major Works ‘Concerto for Sitar and Orchestra’ was one of his most brilliant compositions, written in 1970 in response to an invitation from the London Symphony Orchestra. Ravi Shankar played the sitar in this concert directed by Andr Previn.He was nominated for an Academy Award for his music for the 1982 Hollywood film ‘Gandhi’.Apart from the works mentioned previously, ‘Concert for Bangladesh,’ ‘West Meets East,’ and ‘Full Circle: Carnegie Hall 2000’ are three of his most critically regarded CDs.

He earned the 1957 Berlin International Film Festival’s Silver Bear Extraordinary Jury Prize for composing the music for the film ‘Kabuliwala’.This musical maestro won four Grammy Awards: the first in 1967 for ‘West Meets East’; the second in 1972 for ‘The Concert for Bangladesh’; the third in 2000 for ‘Full Circle — Carnegie Hall 2000’; and the fourth in 2013 for ‘Lifetime Achievement Grammy Award’.In 2001, Queen Elizabeth II appointed him an honorary Knight Commander of the Order of the British Empire for his’services to music.’He was also awarded France’s highest civilian distinction, the ‘Knight of the Legion of Honor,’ for his remarkable contribution to music.

In 1941, he married Annapurna Devi, the daughter of his instructor Allauddin Khan. The couple gave birth to a son, Shubhendra Shankar, in 1942 and divorced in the 1940s. He eventually had a romance with dancer Kamala Shastri.
Additionally, he was involved with Sue Jones, a New York concert producer, with whom he had a daughter, Norah, in 1979.Sukanya Rajan gave birth to his second daughter Anoushka in 1981. In 1989, the couple married.Norah, his elder daughter, has received nine Grammy nominations, while Anoushka, his younger daughter, has been nominated twice.

On 6 December 2012, he was taken to Scripps Memorial Hospital in La Jolla, San Diego, California, after having severe respiratory difficulties. After a few days, he departed for the celestial abode.He is renowned with popularizing the jugalbandi duo concert style and is credited with introducing several new ragas, including Tilak Shyam, Nat Bhairav, and Bairagi.In 1968, he published his first autobiography, ‘My Music, My Life,’ and followed it up with a second, ‘Raga Mala’, a few years later.His daughter Anoushka also wrote a book on her father in 2002, titled ‘Bapi: Love of My Life’.

Ravi Shankar Net Worth: Ravi Shankar was a $5 million Indian artist. Pandit Ravi Shankar was born in Varanasi, United Provinces, British Raj, in 1920. He is one of the most renowned sitar musicians and composers of Hindustani classical music of his generation. He toured his native country and much of Europe as a member of his brother’s dance troupe before opting to learn to play the sitar.

He recomposed the melody for “Sare Jahan Se Achcha,” one of India’s most popular national songs.Ravi Shankar, who was working at the time at All India Radio, played melancholy music over the radio following Mahatma Gandhi’s assassination. He drew three’sargam’ notes from the name Gandhi—”Ga” (third), “Ni” (seventh), and “Dha” (sixth)—and devised an inventive musical motif.He was a lifelong vegetarian, having been born into a Hindu Brahmin household.