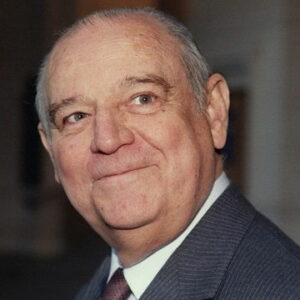 Octave Raymond Joseph Barre was a politician and economist from France. From 1976 to 1981, he served as France’s Prime Minister. In his youth, he was forced to abandon a career in medicine when he was drafted into the French army during World War II. He studied law and economics instead of medicine after the war and taught economics at the University of Paris and other institutions. Though he was a political unknown, President Giscard was impressed by his economic expertise and knowledge and appointed him Prime Minister. While the economic reforms implemented by Giscard and Barre were deemed detrimental to the French economy during their tenure in office, Barre believed they were absolutely necessary for its revival. Despite stiff opposition from labor unions, he cut thousands of jobs, reduced government spending, and attempted to restructure the failing economy in general. He admonished people for grousing and holding rallies and urged them to work hard. He was forced to resign from his post and the reform process following President Giscard’s defeat in the 1981 presidential elections. In 1988, he ran unsuccessfully for President. He was almost certainly the only Frenchman to become Prime Minister without having previously been a member of a political party.

Raymond Barre was born on April 12, 1924, in Saint-Denis, Reunion, a French colony. Rene Barre, a merchant who has been a resident of Reunion since 1843, was his father, and Charlotte Deramond was his mother.

He began his education at the ‘ecole de l’Immaculee Conception’ and later transferred to the ‘lycee Leconte-de-Lisle’ on Reunion.

In 1945, he was drafted into a French artillery unit, and his dream of studying medicine had to be abandoned. After the war ended, he was demobilized and returned to Paris on January 15, 1946.

He joined the ‘Cite Internationale Universitaire’ and passed the economics and law aggregation exams, earning a diploma from Paris’s ‘Institut d’Etudes Politiques’ in 1950.

Raymond Barre was appointed professor at the ‘Faculty for Law and Economic Sciences of Caen’ but was unable to join the institute for four years due to his involvement with the Tunisian ‘Institute of Advanced Studies.

He began his teaching career at the ‘Institute of Political Studies’, the ‘Faculty of Law and Economics’, and the ‘Ecole Centrale Paris’ in Paris.

He joined the Charles de Gaulle government in 1959 as a consultant in the ‘Ministry of Industry and Trade,’ where he served as head of staff until 1962.

In 1966, he was appointed a consultant to the ‘Economic Planning Commission’ to advise on the government’s ‘wage and price policies.

He was appointed vice-president of the ‘European Commission for Economic and Financial Affairs’ by de Gaulle in 1967.

He served in Brussels until January 1973 on the Rey, Malfatti, and Mansholt commissions. From 1973 to 1976, he was a member of the ‘Board of Directors of the Bank of France.’

He resigned from the ‘Ministry of Economy and Finance’ in 1978 but retained his position as Prime Minister until 1981. When Giscard was defeated in the presidential election by Francois Mitterrand, owing largely to his failure to fully revive the French economy, Barre was forced to resign.

He was elected to the National Assembly in 1978 and became a leading member of the ‘Union for French Democracy’ or UDF party, which opposed President Mitterrand’s socialist government on all economic issues. He served in this capacity until 2002.

He ran for President in 1988 as a UDF candidate but was defeated by Mitterrand and Jaques Chirac. He remained active in politics after that, advocating for Lyon to become the home of the ‘Central Bank of United Europe’.

He was elected Mayor of Lyon in 1995 when Michel Noir was forced to resign before the end of his term due to a court indictment. Barre served in the position until 2001 but did not seek re-election. In 2002, his term in the National Assembly came to an end, and he stepped down from active politics.

In 1953, Raymond Barre translated Friedrich Hayek’s book ‘Scientism and Social Science, Essay on the Misuse of Reason’ into French.

He published his book Economie politique’ in 1956, which has remained a standard textbook for students for a long period of time and has been reprinted numerous times.

Raymond Barre received the ‘Legion of Honor’ in recognition of his contributions to the French economy.

On November 19, 1945, he married Eva Hegedus. He has two sons from his marriage, Oliver and Nicolas.

He had been hospitalized with heart problems and was transferred from Monaco to a military hospital on April 11, 2007.

The estimated net worth of Barre is $20million.

Raymond Barre desired to study medicine but was unable to do so due to his conscription into the army during World War II. Instead, he became an economist and entered politics.