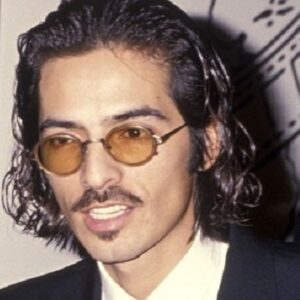 René Elizondo Jr. is a Los Angeles-based dancer, songwriter, and music video director of Mexican descent. He is widely known for his secret marriage to Janet Jackson, Michael Jackson’s sister. He had an appearance in the music video for Janet Jackson’s song “Come Back to Me” from the album ‘Rhythm Nation’ in 1990. They collaborated professionally as well, since he co-wrote 37 songs with her throughout the years, despite the fact that René’s name didn’t appear in the album credits until much later. He directed the music videos for “That’s the Way Love Goes,” “Again,” and “Together Again” (Deeper Remix) from her 1993 album “janet,” as well as “Together Again” (Deeper Remix) from her 1997 album “The Velvet Rope.” Janet appears topless on the cover of ‘Rolling Stone’ magazine’s September issue in 1993, with René’s hands covering her modesty from behind. “Son of a Gun (I Betcha Think This Song Is About You”), a Janet Jackson song from 2001, is said to be about him. Following their divorce, he married Britt Coelho and now works as the creative director of Anvil Case Co., a company that produces high-end industrial carrier cases.

René Elizondo Jr. began his professional career as a dancer. He became a backup dancer for Latoya Jackson, Janet’s older sister, in the mid-1980s.

During this time, he met Janet, and the two began dating soon after. They were inseparable for a short period of time and began to collaborate on many of Janet’s albums.

He began directing her music videos, including “That’s the Way Love Goes” and “Together Again,” and began writing lyrics for her songs, most notably for her 1997 album “The Velvet Rope,” for which he was also listed as a co-executive producer.

He also became involved in her business operations, frequently advising her on her many entertainment initiatives and events.

Even Janet confirmed in an interview with ‘Rolling Stone magazine that he has been her co-writer on practically all of her songs since her album ‘Rhythm Nation,’ despite the fact that he never asked for credit for his contributions to her songs.

René Elizondo Jr. and Janet Jackson had been together since the mid-1980s, but it was considered that they were just dating and that their marriage had not yet been formalized.

However, it was only after René sued her for spousal support after their divorce that it was disclosed that they had been secretly married for nine years.

Their marriage remained a closely guarded secret in Hollywood for over a decade, until Rebbie Jackson, Janet’s older sister, revealed the couple had eloped years before during an appearance on an Atlanta radio station in 1998.

René later clarified that they did not elope; rather, they were married by a priest on March 31, 1991, in the presence of her mother, his parents, and their best friends in the home they shared in Northern San Diego County. T

hey kept the information a secret because they believed famous couples frequently break up owing to media pressure. Despite the fact that many of their close friends and business associates were aware of their connection, they respected their decision to keep it hidden.

René and Janet’s relationship appears to have deteriorated as their involvement as business and artistic partners grew. He stated unequivocally that no third party was involved in their breakup, and he also stated in an interview that he will never write a book about their private relationship.

He accused her of being deceitful, claiming that he was duped into signing a pre-nuptial agreement that denied him money worth millions. He revealed that he conceptualized the albums ‘Rhythm Nation’ and ‘The Velvet Rope,’ as well as co-wrote the majority of the songs.

They allegedly settled in 2002, with him receiving $15 million, the couple’s black 2000 Mercedes SL600, and the Malibu beachside property they shared.

René Elizondo Jr. was born in Durango, Mexico, on July 16, 1962. He has a younger brother, Yuri Elizondo, who is also a video director who made the music video for Janet Jackson’s fifth album, ‘JANET,’ for the song “Whoops Now.” René began his career as a dancer before moving on to become a video director.

After five years of dating, he married Janet in 1991. They divorced in 2000 after 14 years of marriage. After his divorce from Janet, he began dating Britt Coelho.

She is of Portuguese heritage and works with Compass Real Estate in Los Angeles and Orange County, where she sells luxury houses. They married in a simple beach ceremony in August 2010 and delivered a baby girl called Elin on October 9, 2011.

Réne Elizondo has a net worth of $9 million and is a Mexican American dancer, songwriter, and music video director.