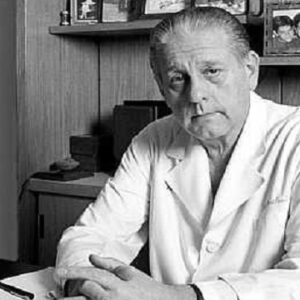 Dr. Rene Geronimo Favaloro was an Argentine cardiac surgeon who is best known for performing the world’s first planned coronary artery bypass operation, which he created himself. He was also the first surgeon in Argentina to successfully execute a heart transplant. He founded the famed Favaloro Foundation, a well-known scientific institution in Argentina committed to teaching medicine and medical research. He was a highly recognized figure in the Argentine medical fraternity. When he returned to Argentina after working for a long time in Ohio, he discovered that there was a dearth of an institution of comparable excellence to the Cleveland Clinic, where he had worked. As a result, in 1975, he established the Favaloro Foundation with the support of other associates. He also educated more than 450 surgeons from all across the Americas, not just from Argentina. This foundation is known for its honesty, passion, and commitment to medical ethics. Favaloro was very concerned about the general population’s health, and he and his brother made numerous efforts to enhance it, including instructing public teachers and nurses.

Rene Favaloro was born in La Plata, the capital of the Province of Buenos Aires, on July 14, 1923. His father was a carpenter named Juan B. Favaloro, and his mother was a tailor named Ida Y Raffaelli. He had a brother who worked as a surgeon as well.

Favaloro has had a passion for football since he was a child, yet he never contemplated making a profession out of it. The boy’s desire to become a doctor was sparked by an uncle who was a physician.

He graduated from Rafael Hernández National College with a bachelor’s degree in 1941, and then joined the Argentine Army to fight in World War II. He began his medical studies at the University of La Plata after being discharged as a Lieutenant in 1945. After receiving his degree in 1949, he completed an internship at the Polyclinical Hospital in La Plata.

Rene Favaloro was forced to relocate to Jacinto Arauz, a rural community some 300 miles south of La Plata, to fill the position of a country surgeon who had become ill. Soon after, he got interested in new breakthroughs in cardiovascular intervention, as well as thoracic surgery.

During one of his visits to La Plata, he met Professor Mainetti, who advised him to seek treatment at the Cleveland Clinic in the United States. Favaloro hesitated at first since he worked in a rural region, but he soon understood that after he returned from the United States, he would be able to do much more to his country and society. As a result, he traveled to the United States.

He worked as an apprentice at Cleveland Clinic under Dr. Delos M. Cosgrove, who was also the center’s co-chairperson. Mason Sones, the father of coronary cineangiography, was also one of his professors.
Rene Favaloro conducted a heart bypass surgery on a 51-year-old woman in 1967. Despite the fact that two other surgeons, Dr. David Sabiston and Dr. Garrett, had previously done heart bypass surgery, none had been published in a medical publication. As a result, Favaloro’s surgery was the first to be reported as a scheduled heart bypass operation.

Favaloro’s method entailed first stopping the heart and then extracting a vein from the patient’s leg. Then one end was sewn into the aorta and the other to the occluded artery. This method, which was the foundation of Favaloro’s profession, became well-known, and the Cleveland Clinic alone completed 171 surgeries in a year. It was later adopted as a regular approach for heart bypass surgery.
He left his job at Cleveland Clinic in 1971 and returned to Argentina, where he had always desired to assist the people. He quickly grasped the need of building a similar institution like Cleveland Clinic and began raising cash.
With the help of the Cleveland Clinic, he founded the renowned Favaloro Foundation in 1975. He not only trained doctors from all across Argentina and the Americas, but he also held various courses, seminars, and conferences to raise his institution’s standard.

In 1980, he founded the ‘Basic Investigation Laboratory,’ which he funded with his own money. In Buenos Aires, the ‘Favaloro Foundation Institute of Cardiology’ was founded in 1992. It began delivering highly specialized services in areas like as cardiology, cardiovascular surgery, heart, lung, and bone marrow transplants, among other things.
Rene Favaloro operated on Tito Lectoure, a well-known businessman and boxing promoter, in 1990. He also conducted countless bypass surgery for gratis on poor and needy patients, despite the fact that the fees were exorbitant. It was a moral obligation for him, he believed.

He placed a heavy emphasis on illness prevention and raised awareness about how adhering to basic cleanliness principles can assist to reduce sickness and mortality rates. To achieve his goal, his institution used to have sickness detection and preventive programs. The Favaloro Foundation is still one of the major cardiac facilities in the Americas, thanks to its skilled staff, advanced technology, and medical ethics.

Rene Favaloro published a number of novels throughout his career. One of his most well-known works is ‘Surgical Treatment of Coronary Arteriosclerosis.’ This book focuses on his well-known heart bypass surgical procedure, which he created.

Another of his well-known writings was ‘Memories of a Rural Doctor.’ He mostly covers his profession while working in the village of Jacinto Arauz, as well as the dismal lives of the people that live there and how he strove to better their standard of living.

Rene Favaloro married Maria Antonia Delgado, with whom he had been in a relationship since high school, in 1951. They lived a lovely, tranquil life together. They did not, however, have any children.

Favaloro was dissatisfied with the current state of affairs. He discovered that, despite his sincere desire to help people and make the world a better place, he was not receiving the necessary backing or funding from government authorities to carry out his noble mission. On July 29, 2000, he shot himself in the head at his house in Buenos Aires, disillusioned and depressed. His death infuriated the entire country. Despite his terrible death, his life had taught humanity the value of unselfish service.

René is one of the richest Doctor & listed on most popular Doctor. According to our analysis, Wikipedia, Forbes & Business Insider, René Gerónimo Favaloro net worth is approximately $1.5 Million.