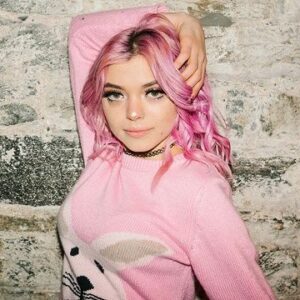 American vocalist and bassist Rena Lovelis is currently a member of the Los Angeles-based pop-rock band Hey Violet. Daughters of musicians, Rena and her older sister Nia were captivated by the performing arts as children. They came together in 2008 to establish the all-female hard-rock band “Cherri Bomb” with a few other people. They then joined Hollywood Records, and in October 2011 they released their first extended play, “Stark.” They changed their name to Hey Violet in 2013 after its lead singer, Julie Pierce, departed the group. Their music also underwent a considerable transformation. The band’s latest studio album, “From the Outside,” was released in 2017 with Rena serving as the new frontwoman. Rena lists the Foo Fighters as one of her main influences. She and her band have opened for acts like Chelsea Girls, Camp Freddie, Filter at the Roxy, and Chelsea Girls. The group received the Teen Choice Award for Next Big Thing in Music in 2016.

The group’s distinctive name was inspired by American music and entertainment journalist and author Carrie Borzillo’s self-help book, “Cherry Bomb – The Ultimate Guide to Becoming a Better Flirt, a Tougher Chick, and a Hotter Girlfriend, and to Living Life Like a Rock Star.”

On June 14, 2011, the trio and Hollywood Records agreed to a lucrative contract. On 18 October, four months after that, they issued their first EP, “Stark.” They soon discovered a faithful following. Bush, Camp Freddy, Filter, Foo Fighters, The Smashing Pumpkins, Staind, and Steel Panther were among the acts the group opened for.

A number of European music events, including Sonisphere, the Reading and Leeds Festivals, and T in the Park in Scotland, gave them the chance to perform. They were the most recent group to perform at the Oxygen festival in Ireland.

This Is the End of Control, released by Cherri Bomb on May 15, 2012, peaked at #11 on the Top Heatseekers chart and #24 on the Billboard Top Hard Rock Albums chart. They got compliments on their music. Even some detractors praised them for reviving hard rock.

After Pierce left the band in January 2013, Cherri Bomb changed their name to Hey Violet. Rena took over as the band’s lead vocalist, and Casey Moreta was added as a replacement guitarist. On March 9, 2013, while they were on stage, he was requested to formally join the group.

The band and Hollywood Records parted ways during this time. They purposefully and significantly altered their musical style as well, essentially evolving into a pop-rock band. Hey, Violet released their brand-new song, “This Is Why,” on March 19, 2015. Five days later, the band’s deal with Capitol Records and 5 Seconds of Summer’s record company, Hi or Hey Records, became public knowledge.

Their debut EP under the name Hey Violet and second overall EP were published on July 17, 2015. The album, titled “I Can Feel It,” peaked at position #2 on the Top Heatseekers chart. The band urgently required a new bassist since Rena was now the new lead singer. Iain Shipp, a new bassist, was presented to the audience during the 2016 Sounds Live Feels Live World Tour and joined the group permanently in September of that same year.

On August 16, 2016, they issued ‘Brand New Moves,’ a new EP. The most recent album by Rena and her band, “From the Outside,” debuted at #2 on the Top Heatseekers chart. Miller departed the group in August 2017, citing the demanding traveling schedule as the cause.

Hey Violet and its former lead singer, Julia Pierce, had a contentious breakup. Pierce claimed that she did not leave the organization voluntarily in a Facebook post and subsequent interviews.

Rena Lovelis was raised in the Orangetown neighborhood after giving birth to Pyrena Lucrezia Morze Enea on April 6, 1998, in New York. Her mother, Stacy Morze (better known as Ana Lovelis), is a musician and actress best known for playing the drums for post-punk bands like Uke til U Puke and for portraying Grace “Lambchops” Lamb in a production of “Fame.”

Her father is a studio builder and a traveling keyboard technician. Nia, whose real name is Szatania Angelika Morze Enea, is a year younger than Rena. She has a mixed ancestry that includes German, Italian, Polish, and Russian.

She developed a strong love for music as a result of growing up in a musical and artistic atmosphere. The first song she played on the bass guitar after learning its subtleties was Green Day’s “Boulevard of Broken Dreams.” Her parents gave her complete support in pursuing her dream of being a professional musician.

American singer and musician Rena Lovelis has a $4 million fortune. In April 1998, Rena Lovelis was born in New York. She is well recognized for singing lead for the pop rock group Hey Violet.