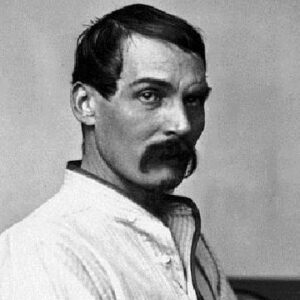 Sir Richard Francis Burton was an English explorer, geographer, translator, writer, soldier, spy, linguist, poet, ethnologist, fencer, and diplomat. In Devonshire, England, he was born into a respectable and wealthy family. His father was a British army commander, while his mother was a wealthy squire’s daughter. Burton was educated by private tutors at a Surrey school before enrolling at Trinity College, Oxford University, where he was dismissed. He enlisted in the East India Company to fight in the first Afghan war, but was instead assigned to General Charles James Napier’s army in Gujarat. He honed his linguistic skills and participated in numerous undercover operations for the Company in India. He returned to Europe on sick leave after an undercover investigation of a homosexual brothel went horribly wrong. His seven-year stay in Middle Asia gave him all the skills he needed to go on the banned (for non-Muslims) pilgrimage to Mecca and Medina that he desired. He completed the voyage successfully, and his memoir became famous around the world. He proceeded on several further banned and exotic adventures as a result of his accomplishment.

After Joseph’s disastrous army career, the family relocated to France in 1825 and traveled frequently between England, France, and Italy. Richard Francis Burton received his elementary education from private tutors before enrolling in a Surrey preparatory school in 1829.

Over the years, he became fluent in French, Italian, Greek, Latin, and Béarnaise and Neapolitan dialects.

In 1840, he enrolled in Trinity College, Oxford, where he had flashes of brilliance and aptitude, but his overall image was that of a troublemaker. In the university, he learned a new language, Arabic, but was expelled in 1842 for disobedience.

Richard Francis Burton enrolled in the East India Company’s army in 1842 to participate in the first Afghan War. He was assigned to the 18th Bombay Native Infantry Regiment, which was commanded by General Charles James Napier.

Napier’s favorite intelligence operative because of his multilingualism and ability to disguise himself. Burton visited the bazaars of Sindh province as a Muslim merchant named Mirza Abdullah and returned with thorough observations.

He conducted an undercover examination into a homosexual brothel frequented by British officers in Karachi in 1845. His report ended up in the wrong hands, and it was assumed that he was also a frequent visitor.

In 1849, he returned to Europe on sick leave. He resided in Boulogne, France, for the next few years, writing four volumes on India, including ‘Goa and the Blue Mountains’ and ‘Sindh and Races that Inhibit the Valley of the Indus,’ as well as a discourse on falconry and a book on bayonet exercise.’

He wanted to study the secrets of Mecca and Medina because he was an avid adventurer. Because non-Muslims were not permitted in these places, he prepared for the ‘Hajj’ while in India by impersonating a Muslim trader. To avoid detection, he studied Islamic beliefs and rituals and even underwent circumcision.

His pilgrimage began in April 1853, when he disguised himself as an Afghani doctor and a Pashtun in order to accomplish his goal. In the travelogue ‘A Personal Narrative of a Pilgrimage to Al-Madinah and Meccah,’ he wrote of this wonderful and yet risky achievement (1855).

He craved more adventure after his successful trek, so he set his sights on Harar, the forbidden East African city. According to a prophecy, if a Christian was admitted within, the city will fall; yet, Burton became the first European to visit the site without being executed in 1854.

His next task was to journey through Somaliland’s interior in search of the White Nile’s source. Lieutenant Speke, Lieutenant Herne, and Lieutenant Stroyan accompanied him.

Their company was attacked by roughly 200 Somali warriors even before the expedition could begin. Stroyan was killed, while Speke and Burton were injured but survived. In his travelogue ‘First Footsteps in East Africa,’ Burton mentions his African adventure (1856).

His next mission was to find the Inland Sea in Africa and potentially find the Nile River’s origins. In 1857, he and Speke set off from Zanzibar.

The duo experienced numerous challenges during this voyage, including equipment theft and obtaining competent bearers. To make matters worse, Speke became temporarily blind and deaf in one ear, while Burton became too weak to walk for an extended period of time. Despite the hardships, they persisted on their journey.

The expedition arrived in Lake Tanganyika in 1858 with tremendous determination, but they were unable to survey the area because much of the equipment had already been lost, broken, or stolen. Burton returned to Equatorial Africa and wrote a book on his experiences called “Lake Regions of Equatorial Africa” (1860).

Speke continued his trek on his own, heading north to the huge Lake Victoria. He, too, was unable to study the lake due to a lack of appropriate equipment, but he was persuaded that this was the Nile River’s source. In the book ‘The Journal of the Discovery of the Nile Source,’ he chronicled his adventures (1863).

Speke went on another voyage with Scottish explorer James Augustus Grant to confirm the source of the Nile. The crew set out from Zanzibar and returned via the Nile, declaring the mission a success after confirming the Nile’s source. However, Burton and other explorers disagreed, resulting in a disagreement between Burton and Speke.

Speke returned to London and gave a presentation at the Royal Geographical Society, where he received the Society’s Gold Medal. Burton was still skeptical of the Nile’s genuine origins and felt deceived by Speke. The duo was supposed to argue the source of the Nile at a British Association for the Advancement of Science conference on September 16, 1864, but Speke died abruptly before the meeting.

Going on expeditions to religiously forbidden places gave Richard Francis Burton a rush. In 1853, he performed Hajj in Mecca (a fiercely guarded Islamic city where non-Muslims are not permitted) and Medina. He made this excursion by impersonating a Muslim merchant and even going through circumcision. His next dangerous mission took him to Harar, the prohibited East African city. According to a prophecy, if a Christian entered the city’s domains, it would fall, yet Burton did so in 1854, being the first European to do so.

In 1886, Richard Francis Burton was knighted by the Order of St. Michael and St. George. A Crimea Medal was also bestowed to him.

Richard Francis Burton proposed to Isabel Arundell over Isabel’s family’s opposition. Isabel’s family was opposed to the marriage because he was neither Catholic nor wealthy. The complaints died down with time, and the pair married in 1861.

He died of a heart attack on October 20, 1890, in Trieste. Burton’s wife never recovered from the loss, and many of Burton’s diaries and journals were burned. Her act was to protect her spouse from being labeled a thug because the most of his data was on what Victorian England termed vice.

Richard is one of the wealthiest explorers and one of the most popular. Richard Francis Burton has a net worth of $1.5 million, according to Wikipedia, Forbes, and Business Insider.