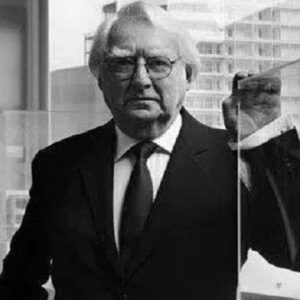 Richard Alan Meier is an American architect known for his geometric designs, rich spatial exposures with an emphasis on light, and a predominance of white color that gives the structures a spotless appearance. His work illustrates his variations and adaptations on traditional modernist architectural concepts. In the 1980s, he pioneered a new design language with his white sculptural works. He is the most prominent member of the ‘New York Five,’ which includes Charles Gwathmey, John Hejduk, Peter Eisenman, and Michael Graves, among others. The ‘Smith House’ in Darien, Connecticut, was one of his earliest works that earned great acclaim, and subsequently he drew notoriety for his remarkable work on the ‘Douglas House.’ The ‘Museum of Decorative Arts’ in Frankfurt, Germany; the ‘Museum of Contemporary Art’ in Barcelona, Spain; the ‘Atheneum’ in New Harmony, Indiana, US; and the ‘Getty Center’ in Los Angeles, California were among the commissions he received as a result of his successful efforts in building private residences. Several architectural groups have honored him, including those from the ‘American Institutes of Architects’ (AIA).

He was born in a Jewish family in Newark, New Jersey, on October 12, 1934, as the eldest of three sons to Jerome Meier and Carolyn Kaltenbacher.
His second cousin, architect and theorist Peter Eisenman, is also a member of the ‘New York Five.’
He grew up in the nearby suburb of Maplewood, where he attended ‘Columbia High School.’
In 1957, he graduated from Cornell University in Ithaca, New York with a ‘Bachelor in Architecture,’ and went on to explore numerous countries, including Germany, Italy, France, Greece, Denmark, and Israel, in order to build a network of fellow architects.

He sought to gain a position in the office of his early inspiration, the famed Swiss-French architect Le Corbusier, when travelling Europe in 1959, and even met Corbusier in Paris, but he was turned down since Corbusier would not hire any American.
He returned to New York in 1959 and worked for a time at Skidmore, Owings and Merrill. After that, he worked for three years with Marcel Breuer, a modernist architect with a ‘Bauhaus’ education who was Walter Gropius’ protégé and ex-partner.
During the day, he worked as an architect, but at night, he painted abstract expressionist paintings. He also shared a studio with one of his closest friends, painter Frank Stella. Later on, he had to devote more time to architecture and could only work on collages on occasion.
He opened his own office in New York in 1963. He also began teaching at the ‘Cooper Union,’ where he remained until 1973. He also continued to be a guest reviewer at a number of institutions.
The ‘Smith House’ (1965–67) in Darien, Connecticut, and the ‘Douglas House’ in Harbor Springs, Michigan, are two of his earlier works that received critical acclaim and major attention (1971-73). While the former is his first white building, the latter is a classic example of his style.
His activities with the ‘Conference of Architects for the Study of the Environment’ (CASE) group led in the publication of the book ‘Five Architects’ in 1972. Michael Graves, Peter Eisenman, Charles Gwathmey, Richard Meier, and John Hejduk were among the artists represented. Later that year, he was identified as a part of the ‘New York Five,’ a group of modernist architects that included the same group of architects.
His early works, such as ‘The Atheneum’ (1979) in New Harmony, Indiana; the ‘High Museum of Art’ (1983) in Atlanta, Georgia; and the ‘Museum für angewandte Kunst’ (1985) in Frankfurt, Germany, garnered him a lot of attention.
Over time, as his popularity grew, he began to receive a lot of commissions. Museums, municipal halls, educational structures, hotels, libraries, cultural facilities, private mansions, industrial research centers, and government offices are all examples.
For almost five decades, ‘Richard Meier & Partners’ has been a well-known name in the world of architecture, having successfully completed several commissions from both the private and governmental sectors. James R. Crawford, Dukho Yeon, Michael Palladino, Vivian Lee, Reynolds Logan, and Bernhard Karpf are among the partners in Richard Meier’s firm. It operates out of New York and Los Angeles. ‘Barcelona Museum of Contemporary Art’ (1995) in Spain, ‘City Hall and Central Library’ (1995) in The Hague, Netherlands, ‘Paley Center for Media’ (1996) in Beverly Hills, California, ‘Getty Center’ (1997) in Los Angeles, California, and ‘White Plaza’ (1998) in Basel, Switzerland are just a few of his notable works from the 1990s.
The French government bestowed the title of ‘Commander of Arts and Letters’ on him in 1992.
In the twenty-first century, he continued to create extraordinary architectural designs, delivering some of his best work. Among them are the ‘West Village’ (2002) in Manhattan, the ‘Jubilee Church’ (2003) in Rome, Italy, the ‘City Tower’ (2004-07) in Prague, Czech Republic, the ‘San Jose City Hall’ (2004-07) in San Jose, California, and the ‘Weill Hall’ (2008) in Ithaca, New York.
A hotel complex in Jesolo, Italy; residential projects in Bodrum, Turkey; two residential towers in Tokyo, Japan; a residential tower in Tel Aviv, Israel; offices in Rio de Janeiro, Brazil; and a resort in South Korea are among his ongoing projects.
He serves on the ‘Board of Trustees’ of a number of institutions and organizations, including the Cooper-Hewitt Museum, the American Academy of Arts and Letters, and the American Academy in Rome.
Many major art and architecture academies and institutes have him on their ‘Board of Directors.’ The American Academy of Arts and Sciences, the American Academy and Institute of Arts and Letters, the International Institute of Architects, the Cornell University Alumni Council, the French Academy of Architecture, and the Belgian Royal Academy of Art are among them.
Many institutes and universities have bestowed honorary degrees on him, including the Pratt Institute, North Carolina State University, University of Naples, University of Bucharest, and The New School for Social Research.
Meier is a member of the ‘American Institute of Architects,’ as well as the ‘Royal Institute of British Architects,’ the ‘Bund Deutscher Achitekten,’ and the ‘Royal Incorporation of Scottish Architects,’ among others.

His most well-known work is the ‘Getty Center’ in Los Angeles, where he worked for more than a decade, from 1985 to 1997. The Getty Center for the History of Art and the Humanities, the Getty Conservation Institute, public galleries, and private study rooms are among the six primary structures that make up the multi-purpose campus. The project allowed him to concurrently explore the contrasting private and public domains while maintaining a balance between the two. He spent the most time at the ‘Getty Center,’ which is made of honey-colored travertine and located in the hills of Los Angeles. The compound’s designs indicate a preference for Classical architecture. It is now one of the most visited tourist attractions in Los Angeles.

The ‘Royal Institute of British Architects’ and the ‘American Institute of Architects’ both awarded him Gold Medals for his exceptional body of work.
The ‘Japan Art Association’ also awarded him the ‘Praemium Imperiale.’
In 1984, he was awarded the Pritzker Prize.
He received the A+ Lifetime Achievement Award in 2013.
Meier was honored with a new professorship at Cornell in 2010.

The estimated Net Worth of Richard A Meier is $5.82 Million dollars.