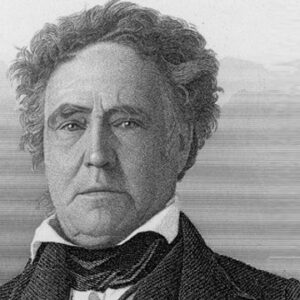 Richard M. Johnson was an American politician who served as the ninth Vice President of the United States between 1837 to 1841, during President Martin Van Buren’s term. Johnson, a Kentucky native, was admitted to the law after completing his studies and then moved toward politics. Johnson rose to prominence as a Jeffersonian Republican in state politics and was appointed to the Kentucky legislature. Following that, he served in the United States House of Representatives before commanding a Kentucky rifle regiment in the War of 1812 during the Canadian campaign. Johnson resigned from the House of Representatives in 1819 to become a United States Senator, a position he held until 1829. Following that, he was elected to the United States Congress, where he backed President Andrew Jackson’s administration and fought for the repeal of debt penalties. Johnson was nominated for Vice President on the Democratic ticket alongside Martin Van Buren in 1836, with Jackson’s support. The election was determined by the United States Senate, which awarded Johnson the position under the Twelfth Amendment after none of the vice presidential candidates gained a majority of the electoral vote. Johnson was denied re-nomination by the Democrats at the end of his term, and he attempted but failed to return to public service. He was later re-elected to the Kentucky House of Representatives, but died of a stroke two weeks after taking office.

Richard Mentor Johnson was born on October 17, 1780, in Beargrass, Kentucky, near the present-day city of Louisville.
He was the fifth of eleven children born to land surveyor Robert Johnson and his courageous wife, Jemima Suggett.
Richard began his official schooling at the age of 15 because there were no schools on the frontier. He studied law as an apprentice of George Nicholas and James Brown at Transylvania University in Lexington, Kentucky.

Johnson was licensed to the Kentucky bar in 1802, and later founded his own law firm.

He later ran a retail store and worked with his brothers on a number of business enterprises.

Richard Johnson was elected to the Kentucky House of Representatives in 1804 to represent Scott County and served on the Committee on Courts of Justice. Johnson advocated legislation to protect settlers from land speculators throughout his presidency.

Johnson was elected to the United States House of Representatives as a Democratic-Republican in 1807, representing Kentucky’s 4th district until 1813. During the 11th United States Congress, he was Chairman of the Committee on Claims.

He was then re-elected and elected to the United States House of Representatives from Kentucky’s 3rd district, where he served from 1813 to 1819. Johnson was elected to six terms in a row between 1807 and 1819.

He resigned from the state assembly in December 1819 and was elected as a United States Senator from Kentucky, where he served until March 1829. During the 19th and 20th Congresses, Johnson chaired the Committee on Post Office and Post Roads.

Johnson was selected for vice president as President Martin Van Buren’s running mate on the Democratic ticket in 1836. For the first time in American history, the Electoral College could not agree on a vice presidential nominee during the election. As a result, under the requirements of the Twelfth Amendment to the United States Constitution, Johnson became the sole Vice President chosen by the Senate.

Johnson was sworn in as Vice President of the United States in March 1837 and served until March 1841.

The Democratic National Convention refused to nominate anyone for vice president in the 1840 elections. As a result, the respective Whig candidates beat Van Buren and Johnson.

Following his service, Johnson returned to Kentucky and served in the Kentucky House of Representatives from 1841 to 1843, representing Scott County.

He was re-elected to the Kentucky House of Representatives in 1850, and he served there for two weeks before dying.

He was the leader of a regiment of Kentucky riflemen during the War of 1812, serving in the Canadian campaign under William Henry Harrison. Johnson took part in the ‘Battle of the Thames,’ and was one of 14 military leaders honored by Congress with a sword.

Following the war, Johnson sought to pass legislation ensuring pensions for widows and orphans, as well as funding for internal improvements in the West. His resistance to the re-chartering of the First Bank of the United States as a member of the United States House of Representatives won him national recognition.

Johnson inherited an octoroon slave named Julia Chinn when his father died and had a connection with her. The couple had two daughters, but because Chinn was a slave, Johnson and Chinn were not allowed to marry.

Johnson developed a relationship with another family slave after Chinn’s death in the summer of 1833, and then with her sister, who was also a slave.

The estimated net worth of Richard Mentor Johnson is $5 million.