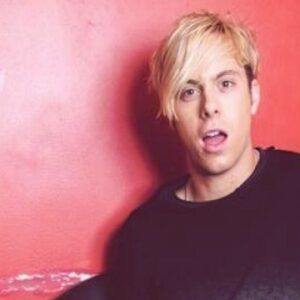 Riker Lynch is an American singer, songwriter, and bassist. He established R5 with his brothers and best friend. Riker has a tremendous social media following and a successful profession at the age of twenty-five. Riker is a musician, singer, dancer, and actor. He decided at an early age to pursue a career in entertainment, and he is now a music sensation. Riker began his career as a young performer in children’s plays at the age of three. In his teens, he developed a passion for music. After urging his brothers to start their own band, they came up with the moniker ‘R5′ and dominated the music charts with song after hit. Before gaining success as a singer, he was on ‘Glee’. With a budding pop-rock career, the singer has gained notoriety by appearing on reality shows and participating in public events. Riker has been busy touring the US and Europe since the release of his band’s first EP.

Stormie and Mark Lynch had Ricker Anthony Lynch on November 8, 1991. He has three brothers – Rocky, Ross, and Ryland – and a sister named Rydel.

At three, he joined Colorado Productions for singing and acting lessons. He also attended piano lessons with his sister.

His youth was spent on stage with his siblings. In his early years, he used to write songs and direct films with his brothers. And he entered several dance competitions with his sister.

Due to his talent, he was often found singing and acting in children’s musicals and plays such as Peter Pan, Aladdin, A Chorus Line, and Annie Get Your Gun.

When he was sixteen, he asked his parents to go to California so he could pursue an acting or music career. But his father couldn’t transfer and had to stay to support the family.

This step broke the family, although Riker’s mother moved to L.A. He missed his father daily yet worked hard to honor his father’s sacrifice.

After a singing and acting audition with Fox Productions, he got a job in ‘Glee’. He starred in one of the most popular TV series at the time as ‘Jeff’.

He debuted in season 2. His recurring part lasted three seasons, with season four being the final.

From May to July 2011, he toured Canada, England, and Ireland with the ‘Dalton Academy Warblers’.

Due to the tour’s popularity and fan demand for more, a television movie based on tour recordings was published. The movie, titled ‘Glee: The 3D Concert Movie,’ was later released on DVD.

Simultaneously, his brothers Rocky and Ross learnt guitar, while Rydel improved as a pianist. Riker had already learned bass and Ellington Ratliff was a great drummer. They decided to start their own band, branding it ‘R5′.

Riker is the band’s bassist and co-songwriter/lead vocalist with his brother Ross. Initially, the band performed at the Orange County Fair, The Knitting Factory, and Six Flags Magic Mountain in California.

E-Vega produced and managed the band’s debut Extended Play (EP) ‘Ready Set Rock’ in 2010. Their EP was favorably acclaimed and charted in the US.

After the success of their debut EP, they signed with Hollywood Records and immediately went on their first club tour. After their tour, they played several gigs in the USA.

They released two songs via the adolescent comedy ‘Austin & Ally’ in September 2012, and their second EP ‘Loud’ in 2013.

Their second EP drew a lot of attention, especially from young people. They planned a tour and released their debut album ‘Louder’ in September 2013, with ‘Pass Me By’ topping the charts.

He danced contemporary, jive, salsa, and other forms like an expert. Allison Holker, a lovely dancer, was his show partner.

He made it to the finals, but lost to Rumer Willis and Valentin Chmerkovskiy. He came in second, with Noah Galloway coming in third.

He helped his band write outstanding songs like ‘Without You,’ ‘Never,’ ‘Can’t Get Enough of You,’ ‘Say You’ll Stay,’ and ‘Crazy for You’.

R5’s covers went popular on social media. Famous singers and artists said the band created some of the best cover tunes. One of the most popular songs was Justin Bieber’s ‘Love Me’.

His most memorable acting performance was as ‘Jeff’ on ‘Glee’, a musical comedy drama. It helped him get fame as a vocalist and performer and encouraged him to start his own band.

Riker Lynch finished second with Allison Holker on ‘Dancing with the Stars’. The audience enjoyed seeing the actor-musician play again after a three-year hiatus.

Riker now resides in California with his family. He claims to cooperate closely with his brothers in any future endeavors.

He enjoys reading fiction works like ‘Harry Potter’ and ‘The Hunger Games’. He is six feet tall and enjoys casual and fashionable attire.

Riker has been dating Instagram sensation Savannah Latimer since 2015. She is currently signed to Bloc Talent Agency and appears in various music videos.

Riker Lynch has a net worth of $2 million as an American singer-songwriter, musician, actor, and dancer. Riker Lynch was born in November 1991 in Littleton. Lynch is most recognized for his role as Jeff on Glee and for being a lead vocalist and bassist for R5.