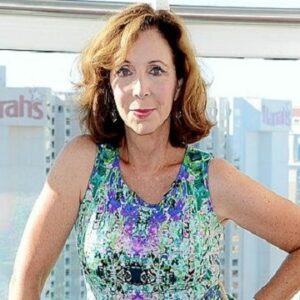 Rita Rudner is an American actress, comedian, screenwriter, and author. She is well-known in the comedy world for her soft, light-hearted one-liners that are mostly about how men and women interact with each other. Rudner started out as a chorus line dancer in New York City Broadway shows. After having trouble with that for a while, she switched to doing stand-up comedy in New York City clubs. She changed careers because stand-up comedy wasn’t as competitive for women at the time, and Rudner was good at it. She was soon seen on TV, first in commercials, and then as a comedian on shows like “The Tonight Show with Johnny Carson” and “Late Night with David Letterman.” As she appeared on TV more and more, she got more chances to be creative. HBO gave her a solo show called “Rita Rudner’s One Night Stand,” which was followed by “Born to be Mild” and “Married Without Children.” She is also a best-selling author whose books, like “Guide to Men” and “Naked Beneath My Clothes,” are funny and clever. She now lives in Las Vegas with her family and does cabarets and production shows there.

Rita Rudner’s parents, Abe and Frances Rudner raised her in Florida. Her father was a lawyer, and when she was 13, her mother died. When she was 15, she finished high school and moved to New York.

Rudner moved to New York in 1972 so that she could become a dancer. She had to work hard to get where she is now, and after three years she was in the chorus line of a touring production of “Zorba.”

Rudner worked hard in New York to be known as a dancer. After joining “Zorba,” she got parts in several Broadway shows, including “Mack and Mabel” (1975), “They’re Playing Our Song” (1979), and “Annie” (1980).
Rudner quickly changed careers and started to be in TV commercials. She did about 60 ads, and while she was doing that, she used her funny side by doing stand-up in New York clubs.

Rudner’s first chance to be seen in the media as a comedian was in 1982, when she got to be in “Catch a Rising Star’s 10th annual comedian special” with Billy Crystal and Robin Williams, both of whom were already well-known.
Things were getting better for her, and in 1987, she was on CBS’s “The Morning Show.” The next year, all of her hard work paid off when she got to be on the “Tonight Show With Johnny Carson.”

Rudner got enough attention from the media to become a regular on TV, and she was on a lot of shows on both American and British TV networks. She also appeared on “The Tonight Show with Johnny Carson” and “Late Night with David Letterman.”

Rudner was becoming well-known and was on the “9th Annual Comedians Special” on HBO, as well as “Stand Up America,” “The Comedy Club,” “Funny People,” and “Women of the Night,” a Showtime comedy special for women.

In 1989, she got a solo spot on HBO called “Rita Rudner’s One Night Stand.” This was the best and most important chance of her career. Critics liked what she did, and she was nominated for a Cable Ace Award.

Rudner’s first book, “Naked Beneath My Clothes,” was written and put out in 1989. As soon as it came out, it was called a bestseller, and the audio version also became very popular and was nominated for a Grammy.

In 1990, Rudner was on HBO’s “Born to be Mild” and hosted her first talk show, “Rita Rudner,” for which she won Cable Ace Awards. But after the first season, the show was taken off the air.

During this time, she kept showing up on TV with her cable specials, such as “George Burn’s 95 Birthday Party,” which she did with Steve Allen, Red Buttons, etc., “Comic Relief V,” and “Married Without Children,” which she did on her own for HBO.

In 1992, she and her husband Martin Bergman wrote the screenplay for the movie Pete’s Friends. Two Evening Standards British Film Awards were given to the movie, and Rudner’s first role in Hollywood was in it.

Rudner’s next best-selling book, “Guide to Men,” came out in 1994. It was a funny book about men, women, and the relationships they have with each other. The next story she wrote, “Ticked Pink,” was partly based on her own life.
Rudner signed a contract in 2001 to only perform in cabarets and production shows at the New York Hotel and Casino in Las Vegas. A cabaret theater was built at the MGM Grand just for her.

In 2003, she started her first syndicated daily talk and advice show, called “Ask Rita.” The American Women in Television and Radio put it in the running for a Gracie Allen Award.

In 2006, she wrote another book called “Turning the Tables,” which is a romantic fiction book. She and her husband have been writing a musical called “Natural Woman.”

Rudner became a well-known comedian after her first solo show on HBO in 1989, called “Rita Rudner’s One Night Stand.” When she worked with HBO again in “Born to Be Mild” and “Married Without Children,” she became even more well-known.

Rudner married British producer, writer, and director Martin Bergman in 1988. Bergman is known for his work in Hollywood. Molly is their adopted daughter, and the three of them live in Las Vegas.

Rita Rudner is an American actress, comedian, and writer with a $12 million net worth. She was born in September 1953 in Miami, Florida. Before she became a stand-up comedian, she danced on Broadway. Rudner became one of the best female comedians and appeared on The Tonight Show with Johnny Carson and several HBO specials.

Rudner chose stand-up comedy instead of dancing on Broadway because it was a less competitive field for women at the time.
Rudner did a lot of pilots in order to get one sitcom that was a hit, but none of them were ever important.