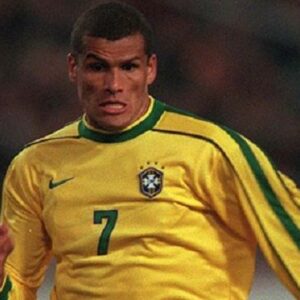 Rivaldo Vtor Borba Ferreira is a former footballer and current sports administrator from Brazil. He is widely regarded as one of the greatest attacking midfielders to have ever played the game of football, having won a number of tournaments for both his clubs and his country over the course of his two-decade career. Rivaldo was born and raised in Brazil, where he played youth football for a few years before moving to Europe with Spanish club Deportivo la Coruna. His silken skills, nose for goal, and ability to score spectacular goals seemingly out of nowhere made him an instant success in Barcelona, where he enjoyed one of the best periods of his career as a footballer. He assisted Barcelona in winning numerous titles and was also the team’s primary playmaker as the team developed a reputation for their attacking game. Rivaldo was also an inspiration for the Brazilian national team, as he assisted them in reaching the 1998 World Cup final, but his greatest triumph came four years later, as he was a key architect of the national team’s record-breaking fifth World Cup victory. Rivaldo also played for AC Milan and was a member of the team that won the Champions League.

Rivaldo Victor Borba Ferreira was born in Paulista, Brazil on 19 April 1972. Romildo Ferreira was his father, but his mother’s name is unknown. Rivaldo grew up in abject poverty in one of Recife’s numerous favelas, and malnutrition and dental problems plagued him as a child.

Rivaldo was an enthusiastic footballer who excelled as a forward despite numerous health problems. At the age of 16, he joined his local club, Paulistano Futebol Clube, and despite the club’s coaches believing he was too frail to play football, he proved them wrong.

Rivaldo Ferreira lost his father Romildo in 1989, but the tragedy did not deter his ambitions to become a footballer, and the following year he signed a professional contract with Paulistano Futebol Clube.

Rivaldo moved to Santa Cruz in 1991 after a brief stint at Paulistano Futebol Clube. Over the next two years, he changed clubs frequently. He began his career with Mogi Mirim in the Brazilian second division before joining Corinthians a year later. He scored 11 goals in 30 games for Corinthians. He made his national team debut two years after joining Santa Cruz in a friendly game.

He later represented Brazil at the Olympics, but played a minor role.

He joined Deportivo la Coruna in 1996 and made an immediate impact, scoring 21 goals in his only season with the club. The following year, Spanish giants Barcelona signed him for a fee of $26 million, and he helped the club win the league and cup double in his first season. Rivaldo scored 19 goals during his rookie campaign.

Rivaldo was instrumental in Brazil’s run to the 1998 World Cup final in France, scoring three goals during the tournament, and five goals the following year as Brazil successfully defended their Copa America title in Bolivia.

In 1999, he scored 24 goals to lead Barcelona to another Spanish league title, and he was regarded as the world’s best player at the time. Rivaldo fell out with club manager Louis van Gaal the following season over disagreements over his ideal playing position, and he eventually left the club after five years. He scored 92 goals in 182 games during his five seasons at the club.

Rivaldo’s finest moment as a footballer came in 2002, when he scored five goals in the World Cup to help Brazil win a record-tying fifth title. Rivaldo joined AC Milan in the same year and helped the club win both the UEFA Champions League and the Coppa Italia during his tenure. He spent a few months on loan with Brazilian club Cruzerio before joining Olympiacos in Greece.

Rivaldo joined Olymiakos in 2004 and scored 34 goals in three seasons, helping the club win the league title in each season. He then joined AEK Athens in the Greek league, where he scored 12 goals in one season.

Rivaldo joined Uzbek club Bunyodkor in 2008 and played for the club for two seasons, winning two league titles. In 53 appearances for the club, he scored 33 goals. He returned to Brazil following that stint to play for Sao Paulo, before moving on to Kabuscorp, an Angolan club, and a brief stint at Sao Caetano. Rivaldo, on the other hand, was growing older and his prime years had passed him by. He signed a contract with Mogi Mirim and played for them for one season before retiring from professional football a month shy of his 42nd birthday.

Rivaldo won the 1999 Ballon D’Or and FIFA World Player of the Year awards. In 2014, he was named to Pele’s ‘FIFA 100’ list of the greatest living footballers.

Rivaldo has won every conceivable medal a South American footballer could win, but his most significant accomplishment is undoubtedly his role in Brazil’s 2002 World Cup victory in Japan and Korea, where he scored five goals for the national team.

Rivaldo married Rose Ferreira in 1993, but the relationship lasted only ten years. They have a son, Rivaldinho, who is a footballer as well.

Rivaldo later married Eliza Kaminski Ferreira for the second time, but the exact date of the marriage is unknown. They are childless.

The net worth of Rivaldi is $74million.