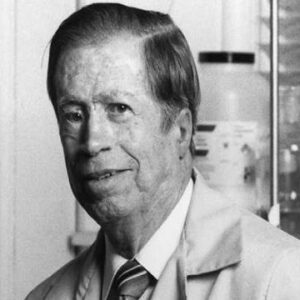 Robert Bruce Merrifield was an American scientist who won the Nobel Prize in Chemistry in 1984 for developing solid-state chemical synthesis methods. His brilliant discovery of fast protein synthesis contributed in the simplification of many scientific experiments. He pursued a Bachelor’s degree in Chemistry and a PhD in Biochemistry at the University of California, Los Angeles, after becoming interested in science as a child. He then joined the Rockefeller Institute for Medical Research, where he stayed for the rest of his career, rising through the ranks to become the John D. Rockefeller Professor in 1984. He invented solid phase peptide synthesis as a result of his research, a process that allowed for the methodical investigation of protein structure. He also invented a machine for automation a few years later, simplifying and speeding up the procedure. He received significant accolades such as the Gairdner Foundation International Award, Albert Lasker Award for Basic Medical Research, and the Chemical Pioneer Award in addition to the Nobel Prize. In 1972, he was elected to the National Academy of Sciences of the United States. He had also written a semiautobiographical book titled ‘Life during a Golden Age of Peptide Chemistry: the Concept and Development of Solid-Phase Peptide Synthesis,’ which he had published.

Robert Bruce Merrifield was born in Fort Worth, Texas, to George E. Merrifield and Lorene née Lucas on July 15, 1921. His parents raised him as their only child. He and his family moved to California in 1923. In 1939, he graduated from Montebello High School. He became interested in astronomy and physics while in school.

Later, he enrolled in Pasadena Junior College and transferred to the University of California in Los Angeles after two years. He earned a Bachelor of Science degree in Chemistry in 1943. He subsequently spent a year assisting in research tests on the growth of synthetic amino acid meals and caring for an animal colony at the Philip R. Park Research Foundation.

Recognizing the importance of education, he returned to the University of California, Los Angeles, to pursue his graduate studies under M.S. Dunn, a professor of biochemistry. In 1949, he earned his Ph.D. in Biochemistry.

Robert Bruce Merrifield traveled to New York City after finishing his PhD to work at the Rockfeller Institute for Medical Research. Dr. D.W. Woolley, a scientist, was his boss there. They collaborated on peptide and dinucleotide growth factors, which eventually led to the necessity for peptide synthesis.

In 1957, he was hired as a teacher at the Rockfeller Institute for Medical Research’s Department of Biochemistry, a position he held until 1966, when he was promoted to Professor. He held the position of Professor till 1984. In the mid-1960s, the Institute was renamed Rockfeller University.

In 1969, he and his colleague Bernd Gutte discovered the first synthesis of the enzyme ribonuclease A. This study was significant since it illustrated how a protein’s primary structure influences its tertiary structure. He also became the editor of the publication ‘International Journal of Peptide and Protein Research’ in 1969. (later renamed Journal of Peptide Research).

He was named John D. Rockefeller Jr Professor at Rockefeller University in 1984. He was also an adjunct professor at the Oregon Institute of Science and Medicine during the closing years of his career. His semi-autobiography, ‘Life During a Golden Age of Peptide Chemistry: The Concept and Development of Solid-Phase Peptide Synthesis,’ was published in 1993.

Robert Bruce Merrifield was a scientist best known for his contributions to protein and peptide synthesis from amino acids. He was credited with developing the “Solid-phase peptide synthesis” technology and showing the first automated peptide synthesis prototype. His research influenced the advancement of pharmacology, medicine, and biochemistry, allowing for a more thorough understanding of the structure and activities of antibodies, hormones, and enzymes.

In 1969, Robert Bruce Merrifield received the Albert Lasker Award for Basic Medical Research. He received the Gairdner Foundation International Award in 1970. In the same year, he won the Intra-Science Award.

He was awarded the American Chemical Society’s Creative Work in Synthetic Organic Chemistry Award in 1972.
In 1972, he was elected to the National Academy of Sciences of the United States. He was awarded the Nichols Medal in 1973. “For his discovery of methodology for chemical synthesis on a solid matrix,” he received the Nobel Prize in Chemistry in 1984.

In 1949, he married Elizabeth Furlong, a biologist, and they had six children: five daughters, Nancy, Betsy, Cathy, Laurie, and Sally, and one boy, James. He was the father of sixteen grandkids. He died on May 14, 2006, at his home in Cresskill, New Jersey, following a long illness.