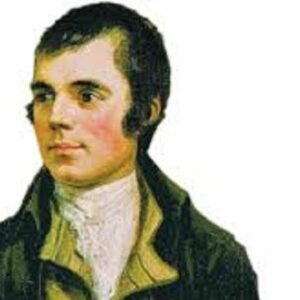 Robert Burns was a well-known poet and lyricist from Scotland. Burns, also known as Rabbie Burns or Scotland’s favorite son, is frequently credited as Scotland’s national poet and is the most well-known Scottish language poet to date. Burns is also regarded as the Romantic Movement’s founder. He is also credited with inspiring both liberalism and socialism’s founders. Throughout the nineteenth and twentieth centuries, commemorating his life and works developed into a national charismatic cult, with his influence clearly visible in Scottish literature. Burns was voted the greatest Scot in a 2009 poll conducted by Scottish television channel STV. Apart from original compositions, Burns collected, revised, and adapted Scottish folk songs. His song “Auld Lang Syne” is frequently sung at Hogmanay, and another, “Scots Wha Hae,” served for a time as Scotland’s unofficial national anthem. “A Red, Red Rose”; “A Man’s A Man for A’ That”; “To a Louse”; “To a Mouse”; “The Battle of Sherramuir”; “Tam o’ Shanter”, and “Ae Fond Kiss” are among his other notable poems.

Robert Burns was born in Alloway, Ayrshire, Scotland on 25 January 1759. His father, William Burnes, was a self-taught tenant farmer who married Agnes Broun, a local girl. Robert Burns was the couple’s eldest child. When Robert was seven years old, his father sold the family home and purchased the 70-acre Mount Oliphant farm southeast of Alloway.

Robert’s childhood was marked by poverty and adversity, which contributed to his frail constitution. He received very little formal education and was primarily tutored by his father. Burns received his education from his father, who taught him reading, writing, arithmetic, geography, and history. John Murdoch taught him and his brother Gilbert from 1765 to 1768.

John instilled in them a love of Latin, French, and mathematics. For the next few years, he studied exclusively at home. Burns was sent to Dalrymple Parish School during the summer of 1772. Robert was the primary laborer at Mount Oliphant when he was only 15 years old.

He was sent to Kirkoswald in the summer of 1775 to complete his education. His father relocated his family from Mount Oliphant farm to the 130-acre Lochlea farm near Tarbolton in 1777. He enrolled in a country dancing school in 1779 and co-founded the Tarbolton Bachelors’ Club with his brother Gilbert the following year.

Burns moved to Irvine, North Ayrshire, in 1781 to train as a flax-dresser. However, Robert was forced to return to Lochlea shortly after the flax shop caught fire during New Year’s celebrations. In 1784, his father died.

Robert and Gilbert made a valiant effort to retain the farm, but after its failure, they relocated to Mossgiel, near Mauchline. Robert was initiated into the Masonic Lodge St David Tarbolton at the age of 22. He joined the Lodge St James Tarbolton Kilwinning number 135 when this lodge became inactive.

Robert Burns was heavily involved in lodge business between 1784 and 1785, attending meetings, passing and raising brethren, and generally running the lodge. Burns was in financial difficulty and accepted an offer from a friend to work in Jamaica for £30 per year. However, he lacked the funds necessary to travel to the West Indies. On the advice of his friend Gavin Hamilton, Burns approached John Wilson, a local printer in Kilmarnock, with proposals for publishing his “Scotch Poems.”

John published Robert’s works on 31st July 1786 under the title “Poems, Primarily in the Scottish dialect.” This collection included poems such as “The Twa Dogs,” “Address to the Deil,” “Halloween,” “The Cotter’s Saturday Night,” “To a Mouse,” “Epitaph for James Smith,” and “To a Mountain Daisy.” The book’s immediate success established him as a national celebrity. Burns traveled to Edinburgh in November 1786 to sell the rights to his book to William Creech.

Burns was well-known in the city and attended numerous aristocratic gatherings. Burns made numerous close friends during his time in the city. Among these friends were Lord Glencairn and Frances Anna Dunlop. Burns briefly courted Agnes ‘Nancy’ McLehose, with whom he exchanged passionate letters. He also befriended James Johnson, a struggling music engraver in Edinburgh. On February 18, 1788, Burns returned to Ayrshire and rented the farm of Ellisland near Dumfries.

In 1789, he was appointed to the Customs and Excise Department. Burns found it difficult to return to farming after working as an exciseman and thus abandoned it in 1791. Burns, meanwhile, continued to produce significant literary works. He wrote “Tam O’ Shanter” in 1790. Burns made significant contributions to Scottish music as a lyricist. When he was asked to contribute lyrics to The Melodies of Scotland, he provided over 100 songs.

His contributions to George Thomson’s “A Select Collection of Original Scottish Airs for the Voice” and James Johnson’s “The Scots Musical Museum” were also noteworthy. Additionally, he collected and preserved traditional Scottish folk songs, which he revised, adapted, and expanded.

“The Merry Muses of Caledonia” was one of these well-known collections. Among his well-known folk songs adaptations are “Auld Lang Syne,” “A Red, Red Rose,” and “The Battle of Sherramuir.”

Burns fathered his first child, Elizabeth Paton Burns, with his mother’s servant Elizabeth Paton, while he was dating Jean Armour, who became pregnant with his twins in March 1786. Burns desired to marry Jean, but her father opposed the union. They married in 1788. The couple had nine children, three of whom survived childhood.

Meanwhile, he fell in love with Mary Campbell, whom he met in Tarbolton’s church. She later returned to Campbeltown to visit her parents.

Robert Burns’ poetry incorporated elements of classical, biblical, and English literature, as well as the Makar tradition of Scotland. He was fluent in both Scots and Scottish English dialects. His poetry frequently dealt with republicanism, radicalism, Scottish patriotism, anticlericalism, class disparities, gender roles, poverty, and sexuality.

Burns is frequently regarded as a proto-Romantic poet, having influenced Wordsworth, Coleridge, and Percy Bysshe Shelley.

Burns gained popularity in Russia as the “people’s poet.” He was also viewed as a symbol of the common Russian people. The Soviet Union issued commemorative stamps in his honor in 1956. Burns is depicted on the Clydesdale Bank’s £5 banknote (since 1971), which is one of the Scottish banks authorized to issue banknotes.

The Royal Mint issued a commemorative two-pound coin in 2009 that featured a quote from “Auld Lang Syne.” Numerous Burns clubs have been founded throughout the world. The Mother Club, the first known Burns club, was founded in Greenock in 1801 by merchants from Ayrshire.

His birthplace in Alloway has been transformed into a public museum known as Burns Cottage, while his Dumfries home is now operated as the Robert Burns House. In Dumfries, the Robert Burns Centre features additional exhibits on his life and works. The farm on which he lived from 1788 to 1791, Ellisland Farm in Auldgirth, is now a museum and working farm.

Additionally, he is commemorated by a number of organizations, including the Robert Burns Fellowship at the University of Otago in New Zealand and the Burns Club Atlanta in the United States. Additionally, numerous towns bear his name, including Burns, New York, and Burns, Oregon.

Additionally, there is a statue of Robert Burns in Dunedin, New Zealand’s Octagon. Scotland celebrates Burns Night, effectively a second national day, on January 25th each year with Burns suppers held throughout the world. It is more widely observed than St. Andrew’s Day, the official national holiday.

Robert Burns is one of the wealthiest poets and is ranked as one of the most popular poets. Robert Burns net worth is estimated to be between $1-5 million according to our analysis, Wikipedia, Forbes, and Business Insider.