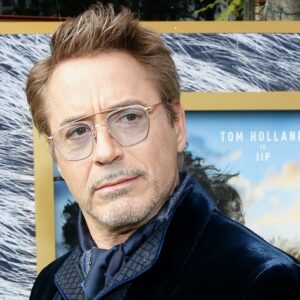 Robert Downey, Jr., the son of enthusiastic director Robert Downey, Sr., is an American actor known for his superb acting in ‘Chaplin,’ quirky interpretation of ‘Tony Stark’ in ‘Iron Man,’ and decades of living in the shadow of drug misuse and law breaking.’ Due to his very creative and addicted father, Downey was immersed in professional acting and drug intake from a young age. He’s spent his life in and out of tabloids, rehab facilities, and prisons, but his acting abilities and talent have earned him the title of one of Hollywood’s most cherished performers. His admirers adore him for the dark and powerful characters he has played in films such as ‘Sherlock Holmes,’ ‘Tropical Thunder,’ and others, as well as his almost superhero-like ability to break out from a life of drug and alcohol abuse that he had been a part of since boyhood. Downey has received numerous honors for his contributions to the film industry, including the Golden Globe, BAFTA, and Emmy. He and his wife Susan Levin are also co-owners of the production business ‘Team Downey.’

Robert Downey, Jr. was born in Manhattan, New York, on April 4, 1965, to Robert Downey, Sr. and Elsie Downey. His father is a well-known film director, actor, and writer, while his mother was an actress. Downey has been an actor since he was a child.
He made his debut film appearance in his father’s film ‘Pound,’ in which he played a dog. Downey grew up in a drug-addicted household since his father was a drug addict. He began smoking marijuana when he was just six years old.
He made his film debut at the age of seven in ‘Greaser’s Palace,’ and afterwards moved to England to pursue classical dance. In New York, he studied at the Stagedoor Manor Performing Arts Training Center.
Downey’s parents split when he was 13 years old, and he moved to California to live with his father. He dropped out of school to pursue a career as an actor. His drug addiction was still a problem for him.

Downey starred in the off-Broadway musical ‘American Passion (1983)’ and was cast in ‘Saturday Night Live (1985)’ from 1983 to 1986. He also appeared in ‘Turf Turf (1985),’ ‘Weird Science (1985),’ and ‘Pretty in Pink (1986),’ all directed by John Hughes.
In 1987, Downey starred in his first leading part in ‘The Pick-up Artist,’ followed by ‘Less Than Zero,’ in which he played a drug-addicted rich young lad. He began to be known as a member of the ‘Brat Pack.’
Downey starred alongside Cybill Shepherd, Ryan O’Neal, and Mary Stuart Masterson in the romantic comedy ‘Chances Are’ in 1989. Then came ‘Air America (1990),’ in which he co-starred with Mel Gibson, and ‘Soapdish (1991),’ in which he co-starred with Sally Field.
In 1992, Downey played the most famous role of his life in Richard Attenborough’s ‘Chaplin.’ He played ‘Charlie Chaplin’ in the film and spent a lot of time preparing for it, earning him an Oscar nomination and a BAFTA Award for it.
He acted in commercial films such as ‘Heart and Souls (1993)’, ‘Shortcuts (1993)’, ‘Only You (1994)’, ‘Natural Born Killers (1994)’, ‘Restoration (1995)’, ‘Richard III (1995)’, ‘Two Girls and a Guy (1998)’, and ‘Black and White (1999)’ between 1993 and 1999.
In 1999, Downey played alongside Annette Bening in the psychological thriller ‘In Dreams.’ It was his final film before he was sentenced to the California Substance Abuse Treatment Facility and State Prison on drug offenses.
Following his release in 2000, he joined the cast of ‘Ally McBeal,’ an American legal comedy-drama television series. He was nominated for an Emmy Award for Best Supporting Actor in a Miniseries and won a Golden Globe for Best Supporting Actor in a Miniseries.
In 2001, for the video of Elton John’s “I Want Love,” directed by Sam Taylor-Wood, he lip-synced the song. With the help of Mel Gibson, who paid his insurance bond, he landed the main role in ‘The Singing Detective’ the following year.
Downey and Halle Berry starred in the eerie thriller ‘Gothika,’ directed by Mathieu Kassovitz, in 2003. He withheld 40% of Downey’s income to ensure that the film’s production would not be hampered by his addiction. Throughout 2005-2006, Downey appeared in films such as ‘Good Night, and Good Luck,’ directed by George Clooney, ‘Fur: An Imaginary Portrait of Diane Arbus,’ ‘Scanner Darkly,’ and ‘A Guide to Recognizing Your Saints,’ among others.
Around the same period, he appeared in commercial films that helped him get recognition in the industry, such as ‘Kiss Kiss Bang Bang (2005), a criminal comedy starring Val Kilmer. He has appeared in the films ‘The Shaggy Dog (2006)’ and ‘The Zodiac (2007).’
In 2008, Downey starred in his first major blockbuster films, including ‘Tropic Thunder,’ an action comedy co-starring Ben Stiller and Justin Theroux, and ‘Iron Man,’ in which he played the distinctive and eccentric character of ‘Tony Stark.’
In 2009, he co-starred with Jamie Fox in the drama film ‘The Soloist,’ which was based on a book by Steve Lopez. Around the same time, he worked on the British-American action mystery film ‘Sherlock Holmes.’
In 2010, Downey reprised his role as ‘Tony Stark’ in the sequel ‘Iron Man 2,’ and was once again a part of the Marvel Studios film project. The film was released in 54 countries and grossed a total of 623.9 million dollars in the United States.
In 2011, ‘Sherlock Holmes: A Game of Shadows,’ a sequel to ‘Sherlock Holmes (2009),’ was released. He co-starred in the film with Jude Law and Jarred Harris, and despite its stellar cast, the film underperformed.
The Avengers, a superhero film based on the Marvel Comics superhero team of the same name, was released in 2012. Along with Samuel L. Jackson, Scarlett Johansson, and others, Downey starred in this big endeavor.
In 2013, another ‘Iron Man’ film, ‘Iron Man 3,’ was produced, in which Downey’s character was shown to be suffering from PTSD. He appeared in the film alongside Gwyneth Paltrow, Rebecca Hall, and others.

‘Chaplin’ (1992) is one of Downey’s most notable achievements to date. Richard Attenborough, the film’s director, had him taught in a variety of skills that were required for an authentic representation of Chaplin, such as learning to play the violin.
After serving time in prison, Downey made a fantastic professional move by joining the cast of the American television mini-series ‘Ally McBeal’ in 2000. He received numerous awards for his performance in the series.
Downey’s portrayal of “Tony Stark” in the films “Iron Man (2008),” “Iron Man 2 (2010),” and “Iron Man 3 (2013)” has made him a major blockbuster phenomenon. In real life, his quirky and laid-back nature reflected in ‘Tony Stark,’ which has helped it become so popular.

From 1992 to 2004, Downey was married to Deborah Falconer, a singer and actor. Indio Falconer Downey, their son, was born to them. When Downey went to treatment on a regular basis and couldn’t break free from his habits, their marriage began to fall apart.
Downey was arrested many times between 1996 and 2001 on drug-related offences. He was arrested for cocaine, marijuana, and heroin possession once, and he was also accused of having a non-licensed pistol on another occasion.
Downey was sentenced to three years in the California Substance Abuse Treatment Facility and State Prison in 1999. He was, however, freed early since his cumulative time in detention on multiple occasions qualified him for early release.
In a Jewish wedding in 2005, he married Susan Levin, an Executive Vice President of Production of Joel Silver’s film firm, Silver Pictures. Exton Elias Downey is the name of the couple’s kid. Downey dated Sarah Jessica Parker, a well-known Hollywood actress, from 1984 to 1991; their relationship ended due to his drug and alcohol addiction.
He claims that his father, who was also a drug addict, introduced him to narcotics when he was a child, and that the two of them used to share drugs.
Downey attributes his recovery from drugs and the ‘bad boy lifestyle’ to his wife Susan.
In 2005, he was slated to be in Woody Allen’s ‘Melinda and Melinda,’ but he was withdrawn from the production after Woody was unable to secure insurance for him.
Downey had been diagnosed with bipolar disorder for a long time, and it was reported in the public.