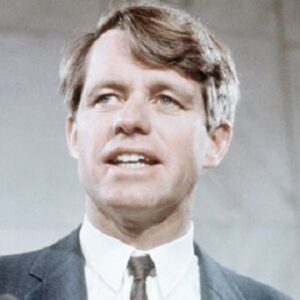 In the 1960s, Robert Francis Kennedy was a well-known American politician. He was President John F. Kennedy’s younger brother. He was the US Attorney General under his brother while also serving three years as a senator from New York. He worked as his brother’s campaign manager in the presidential race and was a member of the Democratic Party. Prior to his murder, he was a front-runner for the Democratic Party’s presidential candidacy. Before entering politics, he worked as an attorney in Washington, D.C. He campaigned against union corruption and investigated it in his book “The Enemy Within,” which is about organized labor union corruption. He advised his brother in the White House, took part in the civil rights struggle for African Americans, and waged a fight against the mafia. Many people think that the fact that he fiercely opposed the Vietnam War is what led to his murder. In his capacity as a senator, he worked to help Brooklyn’s poor and downtrodden residents while also assisting underprivileged and disabled kids. He also advocated for the rights of people in South Africa, Latin America, and other nations.

Robert Kennedy was born on November 20, 1925, to Rose and Joseph P. Kennedy in a devoted Catholic household. One of his older brothers, John F. Kennedy, went on to become the President of the United States. He was the seventh of nine children.

His father was a successful businessman who held office as Britain’s ambassador. He was also a strong politician. The family enjoyed a comfortable and affluent lifestyle.

He gained a lot of knowledge about politics as a young boy through listening in on family dinner conversations. After completing prep school at Massachusetts’ “Milton Academy,” he enrolled in Harvard.

He enlisted in the Navy as a seaman apprentice, but he was unable to participate in World War II. Joseph, his brother, perished during that conflict.

He left the Navy in 1946 and enrolled at Harvard. After earning his political science degree, he enrolled in the University of Virginia’s law program.

He passed the Massachusetts bar exam in 1951 and joined the U.S. Department of Justice’s Criminal Division, but he left after a year to work as a campaigner for his brother’s senate candidacy.

He uncovered the wrongdoing of Teamsters Union head Jimmy Hoffa and David Beck while serving as Chief Counsel for the Senate Labor Rackets Committee in 1957.

In 1961, he was chosen to serve as the nation’s top prosecutor. Under his direction, the justice system operated efficiently, and during his time in office, convictions for organized crime rose by 800%.
He was dedicated to assisting African Americans in obtaining the right to vote while serving as Attorney General. To enforce the court decision allowing the first African-American student to enroll, he dispatched US Marshals and troops to Oxford, Mississippi.

He was a key contributor to the formulation of policy as a White House advisor. For instance, he played a crucial part in the Kennedy administration’s decision to blockade Cuba rather than use force during the 1962 Cuban Missile Crisis.

He was elected to the Senate from New York in 1964, following the murder of his brother, defeating Republican Senator Kenneth Keating. He developed plans for Brooklyn’s disadvantaged and poor children while serving as a senator.

He made an attempt to get the Democratic presidential nomination in 1968. Although he won the primaries in Indiana and Nebraska, he was assassinated shortly after taking the lead in the California primary.

In his capacity as Attorney General, he worked with President Kennedy to propose the Civil Rights Act of 1964, which was passed eight months after the killing of his brother.

He wed Ethel Skakel of Greenwich, Connecticut, a businessman’s daughter, and his sister’s college companion, in 1950. Eleven kids were born to them.

In his capacity as Attorney General, he backed the University of Mississippi’s 1962 decision to admit its first African-American student. On June 5, 1968, he was murdered by Palestinian Sirhan Sirhan, age 24.

He allegedly had his murder committed because he had backed Israel during the 1967 Arab-Israeli War.
The involvement of Robert and John Kennedy in the killing of Marilyn Monroe was questioned by some documents made public by a private investigator in 1985, although this was not supported by any official source.

After President John F. Kennedy was killed, there were a lot of rumors and chitchat about Robert and Jacqueline Kennedy, but many thought they were merely sharing their grief.