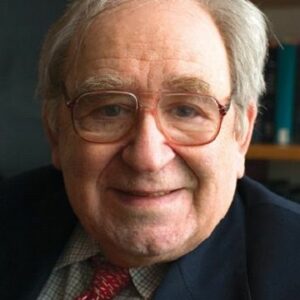 Robert Fogel was an American scientist and historian of economics. He and Douglass North shared the 1993 Nobel Memorial Prize in Economic Sciences. Most people remember him for his support of using numbers to study history. He was also known for his controversial ideas about how slavery affected the economy. He was a brave and sure-of-himself man who thought for himself and never hid what he thought, no matter what the consequences. Robert A. Margo, an economics professor at Boston University, called him “the original interdisciplinary scholar” because he did research in so many different areas. Son of Ukrainian Jews who moved to the United States, he was always interested in learning and at first wanted to be a scientist. But he went to Cornell University to study history with a minor in economics because he was becoming more interested in economics. He then got his MA in economics from Columbia University and his PhD in economics from Johns Hopkins University. He eventually went to college and did a lot of research to find out what makes an economy grow. Even though he was mostly an economic historian, he also did a lot of research in fields like demography, physiology, family sociology, nutrition, and others.

Robert William Fogel was born in New York City, New York, on July 1, 1926. His parents were Ukrainian Jews who had moved there from Odesa. He had one brother who was older. His parents worked hard and started several small businesses. They raised their children in a happy, comfortable home.

His brother, who was six years older than him and nine years ahead of him in school, had a big impact on him as a child. Robert grew up hearing his older brother talk with his classmates about how the Depression affected society and the economy.

In 1944, he got out of Stuyvesant High School. Even though he liked literature, history, and science as a teenager, he became more interested in economics over time and decided to study history at Cornell University with a minor in economics. During college, he also ran the communist group American Youth for Democracy on campus as its president.

He got his B.A. in 1948 and went to work for the Communist Party as an organizer, a job he did for eight years. Then, he went to Columbia University to study under George Stigler. In 1960, he got an M.A. in economics from Columbia.
In 1960, when he was an assistant professor at the University of Rochester, he started doing research. In 1963, he worked with Simon Kuznets at Johns Hopkins University to get his PhD.

In 1964, he started working at the University of Chicago as an associate professor. He also taught at Rochester during the fall semesters from 1968 to 1975.

“Railroads and American Economic Growth,” which came out in 1964, was his first big book. It was based on his PhD dissertation. In this work, he gave a very detailed example of the important economic principle that there is a substitute for almost everything. He also showed that the railroad was not necessary for the American economy to grow.

Fogel wrote a book called “Time on the Cross: The Economics of American Negro Slavery” with a colleague from the University of Rochester named Stanley Engerman (1974). The authors disagreed with what people thought at the time about how slavery affected African Americans in the South of the United States before the Civil War. The book was very controversial and made a lot of noise in the news.

In 1975, he went to Harvard University, and from 1978 on, he worked in Cambridge as a research associate for the National Bureau of Economic Research. In 1981, he went back to the University of Chicago as the head of the Booth School of Business’s new Center for Population Economics.

In response to criticism of his earlier book “Time on the Cross,” he wrote, “Without Consent or Contract: The Rise and Fall of American Slavery.” It came out in 1989. In this book, he focused much more on the social aspects of slavery than on the economic ones. He talked about things like how overworked pregnant women had a high infant mortality rate and how cruel the slaves’ living conditions were.

Fogel and Stanley L. Engerman wrote a book together called “Time on the Cross: The Economics of American Negro Slavery.” It won the Bancroft Prize in 1975.

Fogel and Douglass C. North won the Sveriges Riksbank Prize in Economic Sciences in Memory of Alfred Nobel in 1993 “for reviving research in economic history by using economic theory and quantitative methods to explain economic and institutional change.”

Robert Fogel met the ambitious African-American woman Enid Cassandra Morgan in 1948 and fell in love with her. At the time, people in America didn’t like mixed-race marriages, but that didn’t stop this couple from getting married in 1949.

They had to deal with a lot of trouble because of laws against mixing races, but they stayed committed to each other. Michael and Steven were their two sons. His wife died in 2007.
Fogel died on June 11, 2013, after having been sick for a short time. He was 86.

Robert Fogel’s estimated net worth is $7 million, and he makes most of his money from being an economic historian, writer, university professor, economist, and historian. We don’t know enough about Robert Fogel’s cars or his way of life.