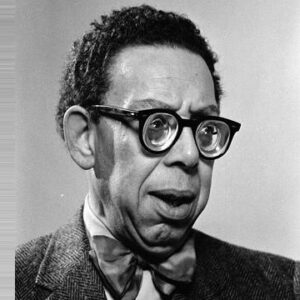 Robert Hayden was a well-known poet, essayist, and teacher from the United States. His book “Ballad of Remembrance,” for which he won the grand prize for poetry at the First World Festival of Negro Arts in Dakar, Senegal, is what people remember him for the most. Hayden joined the Academy of American Poets as a Fellow in 1975. The following year, he was hired by the Library of Congress as its Consultant in Poetry. He was the first black person to hold that job. Hayden was an English professor at the University of Michigan as well. “Heart-Shape in the Dust,” “The Lion and the Archer” (1948), “Figures of Time: Poems” (1955), and “A Ballad of Remembrance” were all important works by him (1962). “Those Winter Sundays,” “The Whipping,” “Runagate,” and “Frederick Douglass” are some of his most well-known poems.

Robert Hayden was born on August 4, 1913, in Detroit, Michigan, USA, as Asa Bundy Sheffey. His parents were Ruth and Asa Sheffey. Before he was born, his parents split up, so Sue Ellen Westerfield and William Hayden took him in and raised him as their own. Hayden grew up in a bad part of Detroit called “Paradise Valley,” which was a ghetto.

Black Bottom was the neighborhood next to it. Hayden had a rough childhood because he moved back and forth between his parents’ home and the home of a foster family who lived next door. He spent most of his childhood watching fights and getting beat up.

He grew up in a home where there was always a lot of anger, which hurt his mental growth and could be seen throughout his life. Hayden also had serious vision problems that kept him from doing things like sports, which he really missed. Over time, these traumatic events from childhood led to debilitating bouts of depression.

Hayden said that when he was young, he had “dark nights of the soul.” Hayden was often ignored by his peers and friends because he was short and had bad eyesight. Because his family and friends ignored him all the time, he had no choice but to read a lot, which helped him become smarter.

Hayden graduated from high school in 1932 and went to Detroit City College with the help of a scholarship (later Wayne State University).

In 1936, Hayden quit college and went to work for the Federal Writers’ Project. During the Great Depression, the Federal Writers’ Project was a way for the US government to pay for written works and help writers. Writers, editors, historians, researchers, art critics, archaeologists, geologists, and cartographers were all welcome at FWP. Hayden learned about and did research on black history and folk culture for FWP.

In 1938, he left the Federal Writers’ Project. Hayden was raised as a Baptist, but in 1940, he married Erma Inez Morris, who was a Bahá’. This made Hayden a member of the Bahá’ Faith. “Heart-Shape in the Dust” was the title of his first book of poems, which came out in 1940.

In 1941, he went to the University of Michigan to study English Literature at the graduate level. At Michigan, he took classes with W. H. Auden, who became a very important teacher for him as he developed his writing. Hayden read Edna St. Vincent Millay, Elinor Wiley, Carl Sandburg, and Hart Crane’s writings.

He also liked the work of Langston Hughes, Countee Cullen, and Jean Toomer, who were all part of the Harlem Renaissance. Hayden was given a Hopwood Award at that place. He got his degree in 1942, and he taught at Michigan University for the next four years. He went to Fisk University in 1946 and stayed there for 23 years.

Hayden’s other book of poems, “The Lion and the Archer,” came out in 1948. It showed that he was a mature, confident artist. “Figures of Time: Poems,” a book of his poems, came out in 1955. In the 1960s, Hayden’s poetry started to be known around the world.

In 1966, his book “Ballad of Remembrance” won the grand prize for poetry at the First World Festival of Negro Arts in Dakar, Senegal. In 1969, he went back to Michigan to finish his teaching career there. Hayden was chosen to be a member of the American Academy of Poets in 1975.

The poem is about remembering how much your father loved you and how lonely you felt. In his other well-known poem, “The Whipping,” a young boy is severely punished for something that isn’t clear.

“Middle Passage,” another famous poem, was based on the events of the United States vs. The Amistad case. “Runagate” and “Frederick Douglass” are two of his other well-known poems.

Hayden’s work was mostly about the struggles of African Americans. He often used the Paradise Valley slum, where he used to live, as a setting. His poem “Heart-Shape in the Dust” made this very clear. Hayden wrote his works using black vernacular and folk speech.

He also wrote political poetry, some of which were about the Vietnam War. Hayden was an artist who took poetry seriously and worked hard at it. His poetry was known for its clever use of language and its economy, which came from a lot of compression, understatement, juxtaposition, and montage.

Poems like “Snow,” “Approximations,” “The Diver,” “The Night-Blooming Cereus,” and “For a Young Artist” show how he uses specific words and short phrases to open up a wide range of possible symbolic meanings. Hayden’s skill with technique let him write poetry both in the symbolist style and against it.

His poetry shows how he moves from writing about specific races or experiences to writing about things that everyone has in common. Even now, Hayden’s poetry is thought to be strong and interesting because of how it wrestles with questions of knowledge and language. Other things that make his poetry so well-known are that it honors African American oral tradition and looks at history.

Hayden got married to pianist Erma Morris in 1940. That same year, “Heart-Shape in the Dust,” his first book, came out.

Robert Hayden’s estimated net worth is $2 million, and he makes most of his money as a dancer, lighting designer, poet, and performer. We don’t know enough about Robert Hayden’s cars or his way of life.