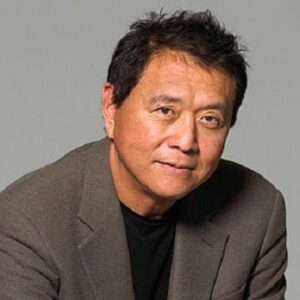 Robert Kiyosaki is a legend who has revolutionized the way people think about money. He is an entrepreneur, investor, author, and motivational speaker by trade, and he is believed to have boldly stated that the reason most people today are failing financially is that they do not know anything about money, despite years of formal education and training. He is the author of ‘Rich Dad, Poor Dad,’ which has climbed to become the best-selling personal finance book of all time since its debut. The book compares his biological father, who was educated but poor, to his imaginary father, who was a college dropout but Hawaii’s wealthiest man. This tycoon entrepreneur, who is now a pillar in his own right, had the most humble beginnings. Surprisingly, the man who has become a multi-millionaire by teaching others how to become wealthy was once a failure who had gone bankrupt twice with his business operations. He, on the other hand, did not succumb to the slide and instead began educating others how to avoid becoming poor and making poor financial decisions.

In Hilo, Hawaii, Robert Kiyosaki was born to Ralph H Kiyosaki. His ancestors were Japanese Americans. His father worked as a teacher and instructor, allowing young Kiyosaki to attend more prestigious schools. He received his primary schooling at Hilo High School before enrolling at the United States Merchant Marine Academy in New York, where he graduated as a deck officer in 1969.

After finishing his education, he began working on commercial ships, allowing him to travel to other regions of the world. He was exposed to various cultures and ways of living as a result of these excursions. He also saw individuals suffering from terrible poverty all across the world. These journeys had a significant impact on him.

He served in the Marine Corps as a helicopter gunship pilot during the Vietnam War in 1972. He was awarded the Air Medal for his service. He quit the Marine Corps two years later. Rather than returning to Hawaii, he relocated to New York.

He worked as a salesman for Xerox Corporation, selling copy machines, from 1974 until 1978. Meanwhile, in 1977, after saving enough money, he founded his own company, which introduced the first nylon and Velcro’surfer’ wallets to the market.

In order to keep the cost of the wallets down, he ignored the quality of the product, which resulted in a drop in demand and financial losses for the company. In the end, bankruptcy was unavoidable. He started a company that licensed T-shirts for heavy metal rock bands like Motley Crue at the start of the 1980s decade. Though the firm was initially a financial success, with a shift in fashion, the predilection for heavy metal bands gave way to softer music, resulting in a drop in demand. In 1985, the company went bankrupt.

He invested money in stocks and shares, as well as real estate, during the blooming phase of his second enterprise. However, as time passed and his business faltered, his bank obligations grew. He was left impoverished and homeless in order to settle the debt.

Despite hitting rock bottom in his life, he never gave up hope and instead used his experience and skills to assist others avoid bankruptcy and achieve financial success. Despite the fact that his experiences and modest living conditions contradicted his profession, he went on to advise others how to avoid becoming impoverished and making terrible financial judgments.

Along with D.C Cordova, he began working as a motivational speaker for Money and You, a personal growth seminar company. The three-day lecture was primarily focused on teaching students about Buckminster Fuller’s works. Initially solely present in Canada and the United States, the company’s popularity allowed it to expand to Australia and New Zealand as well.

This business venture’s popularity, expansion, and global appeal paid off, and he became a multi-millionaire. However, he did not stay with Money and You for long, leaving in 1994 to pursue early retirement. He was 47 years old at the time.

He wasn’t one to sit around and do nothing, so he actively pursued money by investing in stocks and shares as well as the real estate market. However, now that he was no longer employed and had more time on his hands, he began to focus on writing a book.

Following in the footsteps of his educator, ‘poor dad,’ and with the assistance and advice of his ‘rich dad,’ (who was actually his friend’s father), he focused on combining the two lines of beliefs to produce a book that highlighted both his rich and poor dad’s teachings. He teamed with Sharon Lechter on the first ‘Rich Dad, Poor Dad’ book, which they co-wrote. They were unable to find a publisher for the book and therefore opted to self-publish it.

Meanwhile, he returned from retirement after a three-year absence and founded Cashflow Technologies Inc., a business and financial education firm. His wife, Kim Kiyosaki, and co-writer Sharon Lechter are co-owners of the company, which owns and operates the Rich Dad and Cashflow trademarks.

The book ‘Rich Dad Poor Dad,’ published in 2000, promotes financial independence and teaches readers the value of earning money through real estate investments and the start-up and ownership of a business. The book went on to sell ten million copies and become a best-seller. Rich Dad’s CASHFLOW Quadrant and Rich Dad’s Guide to Investing were released as a result of the book’s success. He also published a number of additional novels.

He purchased a silver mine in South America and control of a gold mining company in China in 2002.
He appeared on The Alex Jones Show in 2010 and disclosed his wealth, which included large residential complexes, hotels, and golf courses. He is also the owner and operator of oil drilling operations, oil wells, and a new solar enterprise.

His first three books, ‘Rich Dad Poor Dad,’ Rich Dad’s ‘CASHFLOW Quadrant,’ and Rich Dad’s ‘Guide to Investing,’ all debuted at number one on The Wall Street Journal, USA Today, and The New York Times’ best-seller lists. The popularity of these books encouraged him to continue with the series, which now includes 15 books with a combined sales of more than 26 million copies.

He married Kim Meyer, who is an entrepreneur, investor, author, and motivational speaker, in 1986.
Kiyosaki has provided financial advice on a variety of television news programs, including CNBC, Fox Business, and Bloomberg, over the years. He also appeared on The Oprah Winfrey Show, Fox and Friends, Larry King Live, The O’Reilly Factor, The Alex Jones Show, Glenn Beck, and Your World with Neil Cavuto, among other shows.

Robert Kiyosaki is a $100 million-plus American investor, businessman, author, motivational speaker, and financial pundit. Kiyosaki is best known for his Rich Dad Poor Dad series of books, and he has become one of the most well-known names in self-help and life coaching, particularly when it comes to financial advice. The majority of his income comes from seminars held by independent contractors who pay to use the Rich Dad brand name for marketing purposes.

In the early years of his life, this author of the book ‘Rich Dad Poor Dad’ started two businesses, the first selling nylon and Velcro’surfer’ wallets and the second selling certified heavy metal rock band T-shirts, both of which failed and left him destitute.