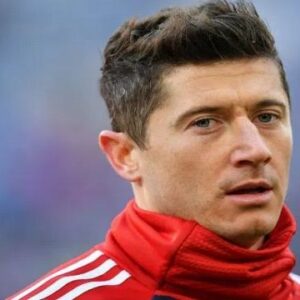 Robert Lewandowski is a well-known Polish professional footballer who now plays for Bayern Munich and is the captain of the Poland national team. He began his career with MKS Varsovia Warsaw, where he was born in Warsaw, Poland. He then went on to play for Lech Poznan before joining Borussia Dortmund. He has been a member of Bayern Munich’s football team since 2014. At the age of 20, he earned his international debut for the senior Poland national team. He scored a goal as a substitute in a match against San Marino, guiding his nation to a victory and qualification for the 2010 FIFA World Cup. Throughout his career, he has garnered numerous prizes and honors. For the seventh time in a row, he was named Poland’s Footballer of the Year. In 2015, he was also named Polish Sports Personality of the Year. In the same year, he was ranked the fifth best footballer on the planet by ‘The Guardian.’ He is also a venture capitalist in addition to being a footballer. He has invested in various start-up businesses through his company Protos Venture Capital.

In June 2008, Lech Poznan signed Robert Lewandowski for 1.5 million zlotys. He made his first appearance for the squad the following month in the first round of the UEFA Cup, when he scored the game’s only goal. During the season, he had a strong showing, scoring 18 goals in 42 games. He again had a good season the following year, scoring 18 goals. He also led his squad to the 2009-10 championship. He signed a four-year contract with Borussia Dortmund in Germany in June 2010 for a cost of roughly 4.5 million euros. In September, he scored his first goal against Schalke 04 in a contest.

He was promoted to an ever-present place in the starting XI for the 2011-12 season. He demonstrated his worth by scoring two goals in a 2-0 victory over SV Sandhausen. He helped his squad win a lot of games. He was voted Poland’s Best Player of the Year for his outstanding performance. He finished the season as the third leading scorer with 22 goals and six assists.

He played a key role in his team’s 2-1 victory over Werder Bremen on the first day of the 2012-13 season. He proceeded to show his prowess in the sport, becoming the first player to score four goals in a Champions League semi-final in April 2013. He led his team to the 2013 UEFA Champions League Final, where Bayern Munich defeated them.

After one more season with the team, he signed a five-year contract with Bayern Munich, Dortmund’s main rival, and joined the team for the 2014-15 season. In 2014, he made his competitive debut for the team in a match against Borussia Dortmund, in which his team lost 2-0. During the rest of the season, he had a strong showing, appearing in 49 games and scoring 25 goals.

He set a record by scoring five goals in nine minutes during the 2015-16 season, the fastest in any major European football league. Guinness World Records granted him four certificates for this achievement. With 42 goals in 51 games this season, he improved his overall performance.

In friendly matches against Belarus, England, and Finland, Robert Lewandowski made three appearances for Poland’s U-21 team. He earned his senior national team debut in September 2008. In a match against San Marino, he came on as a substitute and scored a goal to assist his team win 2-0. Their team was able to qualify for the 2010 FIFA World Cup as a result of this.

He also represented the team at the UEFA Euro 2012, scoring the tournament’s opening goal against Greece in his first match. He was given the title of Man of the Match. He also took part in the UEFA 2016 tournament. He most recently participated in the 2018 World Cup qualification campaign, where he set a new record with 16 goals.

Since June 2013, Robert Lewandowski has been married to Anna Lewandowska. She is also a competitive athlete who placed third in the 2009 Karate World Cup. Klara was the name given to his daughter by his wife in 2017.
He is a devout Catholic.
He is also a venture capitalist, having invested in a number of start-up businesses in addition to his football career.

Robert Lewandowski has a net worth of $85 million.