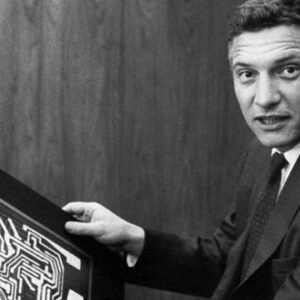 Robert Noyce was an innovator, a founder, a mentor, and an engineer who accomplished incredible things. With a strong intelligence and perceptive mind, Noyce demonstrated his talent from a young age. He started his career as a research engineer for Philco Corporation, then moved on to Shockley Semiconductor Laboratory. His employment at both organizations, however, was brief. He co-founded the powerful Fairchild Semiconductor Corporation in 1957. He co-invented the integrated chip, which transformed the semiconductor industry, during this time. In 1968, he co-founded Intel Corporation in order to satisfy his desire for more. He made his second breakthrough in 1971 when he created the world’s first microprocessor. The microprocessor ushered in the computer age and fueled the personal computer revolution, earning California’s Silicon Valley its well-deserved moniker. Noyce’s laid-back management approach contributed to Intel’s enormous success. He wasn’t the flamboyant boss kind, preferring to urge people to work together as a team. His distinct approach has served as a blueprint for a number of Silicon Valley success stories. He also acted as a mentor to future business titans like Steve Jobs.

Robert Noyce was born in Burlington, Iowa, on December 12, 1927, to Reverend Ralph Brewster Noyce and Harriet May Norton. His father was a minister of the Congregational Church. Robert Noyce was the fourth of the couple’s four sons.

Noyce was raised in a pious household, with both of his parents following to stringent church laws and regulations. Later in life, though, his increasingly irreligious attitude caused him to become an agnostic.

Noyce possessed a sharp mind and a high level of intelligence. He enrolled at Grinnell College after graduating from Grinnell High School in 1945.

In 1949, he earned double majors in Physics and Mathematics, as well as a Phi Beta Kappa key, thanks to his aptitude for mathematics and science.

His bright intellect and scientific inclination propelled him forward in his academic pursuits, and he was accepted into a doctoral program in physics at the Massachusetts Institute of Technology. In 1953, he got his doctorate degree for a dissertation on transistors, a technology that he adored.

Noyce began his career at Philco Corporation in Philadelphia as a research engineer. His resume stated that he worked for the company as a transistor manufacturer. His time at Philco, however, was limited, since he resigned after three years.

He relocated to California in 1956. He went to William Shockley’s Shockley Semiconductor Laboratory from there. The scientific visions of Shockley and Noyce, on the other hand, clashed over the former’s bad administration.

Noyce and his seven coworkers quit the corporation after failing to drive Shockley out of his managerial position, becoming known as the ‘traitorous eight.’

Noyce successfully bargained with Fairchild Camera and Instrument Company to co-found Fairchild Semiconductor Corporation as part of the ‘traitorous eight’ group of researchers.

Noyce worked at Fairchild, where he was in charge of fabricating transistors and other components on enormous silicon wafers. He started by cutting the components off of the wafer and then connecting them with wires.

Noyce soon recognized that breaking the wafer apart was a waste of time. Instead, he could build an entire circuit on a single silicon wafer, complete with transistors, resistors, and other components, giving birth to the integrated circuit.
At Fairchild, Noyce invented the integrated chip. It was basically a silicon chip with a large number of transistors etched onto it at the same time. For the semiconductor industry, his discovery was nothing short of a revolution.

Jack Kilby, an inventor at Texas Instruments Incorporation, and Noyce shared the patent for the Integrated Circuit design.

Despite the fact that they both claimed credit for creating the integrated circuit, Noyce’s Fairchild received a patent on a planar process because it was his technology that was later adopted by manufacturers.

Noyce departed Fairchild Semiconductor in 1968 to co-found Intel with Gordon Moore. Andrew Grove, another Fairchild colleague, soon joined them. The Intel Corporation was founded by the trio.

Intel developed the world’s first commercial computer chip in 1971. On a single silicon chip, the microprocessor unified the circuitry required for both data storage and processing.

Noyce was the President of Intel from 1975 to 1975. He was named chairman of the board of directors that same year, a post he held until 1978.

He was elected chairman of the Semiconductor Industry Association in 1978. In this new post, he was in charge of the semiconductor industry’s expanding economic concerns, particularly in terms of foreign competition.

When Noyce was working at Fairchild Corporation, he devised the integrated chip, which launched his career. It was a silicon chip with a large number of transistors etched on it all at once. The invention completely changed the way the semiconductor business operated up until that point.

After founding Intel in 1968, Noyce had his second major career triumph. He was the first to introduce the world to the microprocessor, kicking off the magnificent period of the computer age. Multiple circuits on a single silicon chip made up a microprocessor, which allowed for both data storage and processing.

Noyce is recognized for establishing the tone and work ethic of Silicon Valley, in addition to creating the integrated chip and microprocessor.

His “roll up your sleeves” management approach offered staff the freedom to do whatever they wanted. He defied the California corporate culture cliché by eschewing a rigid working environment in favor of a more relaxed, less controlled workplace.

Over the course of his life, Noyce received over 16 patents.
President Ronald Reagan bestowed the prestigious National Medal of Technology on him in 1987.

President George H. W. Bush inducted him into the US Business Hall of Fame in 1989.

He, together with Jack Kirby and John Bardeen, received the prestigious Lifetime Achievement Medal during the bicentennial celebration of the Patent Act in 1990.

In 1953, he married Elizabeth Bottomley. William B., Pendred, Priscilla, and Margaret were the couple’s four children. In 1974, the couple divorced after nearly two decades of marriage.

He married Ann Schmeltz Bowers after his divorce from Bottomley. She is presently the Chair of the Board and a founding trustee of the Noyce Foundation, after serving as Director of Personnel for Intel Corporation and Vice President of Human Resource for Apple Inc.

On June 3, 1990, Noyce, a lifetime swimmer and state diving champion, suffered a major heart attack while swimming in the morning. He was admitted to Seton Medical Center in Austin, Texas, and died there.

His family established the Noyce Foundation after his death in 1991 to aid public education in mathematics and science for children in grades K-12.

Grinnel College, his alma mater, named its science building after him.

He was projected to be worth $3.7 billion.

He is affectionately known as the Mayor of Silicon Valley.