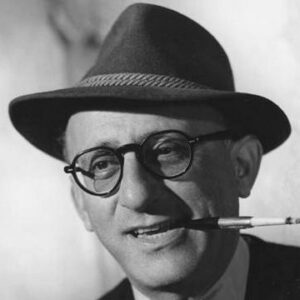 Robert Siodmak was a German film director who directed a number of films in America and Europe. His films were noted for their German-French-American synthesis also known as cinema noir. He had a talent for adjusting himself to the cinema industry of three distinct nations at the same time and he was bracketed with Fritz Lang and Alfred Hitchcock. It was thought that his American pictures were more Germanic than his German ones. He was absolutely a global man, directing pictures in America, Britain, France, Germany, Italy and Spain. Though he made his start in films in Germany he had to depart from the nation before the premier of his movie ‘Burning Secret’ to avoid being imprisoned by the Gestapo because the Nazi leader of propaganda Joseph Goebbels considered it included ‘sick sultriness and airless muddle-headedness’. He originally escaped to Paris much like all other German film-makers earlier and then made his way to America. He was originally picked up for a two year deal with ‘Paramount Pictures’ and later for a seven-year contract with ‘Universal’.

On August 8, 1900, Robert Siodmak was born in Dresden, Germany. Ignatz Siodmak was his father, and Rosa Phillipine Blum was his mother. Curt, his younger brother, was his only sibling. In the mid-1920s, he enrolled in the ‘University of Marburg’ and began working for the ‘Universum Film A.G.,’ a state-run German film corporation created by General Erich Ludendorff and backed by the Third Reich.

His picture ‘Brennendes Geheimnis,’ or ‘Burning Secret,’ was prohibited because it was deemed anti-Nazi German society. It was based on a Stefan Zweig novel and was released in 1933. To avoid German persecution, he fled to Paris in 1933, where he made ‘Le Sexe faible’ or ‘The Weaker Sex’ in 1933, ‘La Crise est finie’ or ‘The Depression is Over’ in 1935, La Vie parisienne or ‘The Parisian Life’ in 1935, ‘Mister Flow’ in 1936, ‘Symphonie D’Amour’ in 1936, ‘Cargaison Blanche’ or ‘

He arrived in America in 1939, only one day before WWII broke out, and signed with ‘Paramount’ in 1941. In 1941, he directed three films: ‘West Point Widow,’ ‘Fly-by-Night,’ and ‘My Heart Belongs to Doddy,’ all of which were released in 1942. Based on his brother Curt’s tale, he directed ‘Someone to Remember’ in 1943 and subsequently ‘Son of Dracula’ for Universal Studios in 1944.

His second picture, ‘Cobra Woman,’ was released in Technicolor in 1944 and starred Maria Montez. In 1944, he directed the film ‘Phantom Lady,’ which was produced by Joan Harrison and starring Ella Raines. In 1944, he released his third film, ‘Christmas Holiday,’ which starred Deanna Durbin against Gene Kelly.

In 1948 he filmed the picture ‘Cry of the City’ while on loan to ‘20th Century Fox’ then returned to ‘Universal’ to shoot another thriller ‘Crisis Cross’ also in 1948 starring Burt Lancaster and Yvonne De Carlo. He worked on Budd Schulberg’s next film, ‘On the Waterfront,’ which was produced by Louis De Rochemont, but he was cut from the project. He filmed the pictures ‘The Great Sinner’ in 1949 for MGM, ‘The File on Thelma Jordan’ in 1950, ‘Deported’, his final one for ‘Universal’, in 1950 and ‘The Whistle at Eaton Falls’ in 1951 for ‘Columbia Pictures’.

Siodmak dabbled in the ‘O. S. S.’ series presented on British television over the years 1957 to 1958. He also created other West German-Italian epics such as ‘Pyramid of the Sun God’ in 1965, an adaptation of Karl May’s novel, and ‘The Fight for Rome I and II throughout 1968 to 1969.

In between he created ‘Custer of the West’ in 1967 in Spain in Cinerama. The picture was substantially re-edited before being aired in America. It was Siodmak’s one and only western. In 1968, he finished his cinematic career with the epic ‘Kampf um Rom.’

Bertha Odenheimer, whom he married in 1933 and lived with until her death on January 20, 1973. This marriage resulted in his having no children. On March 10, 1973, Robert Siodmak died in Locarno, Switzerland. In April and May of 2015, the ‘British Film Institute’ held a retrospective on Robert Siodmak.

The estimated net worth of Robert Siodmak is $5 Million.

Robert Siodmak was well noted for his expertise in thrillers.