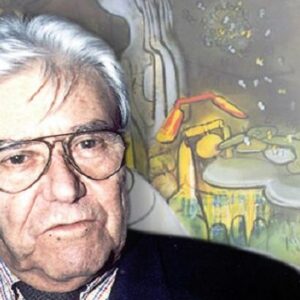 Roberto Matta was one of Chile’s most famous painters. Even though he was an architect by trade, he began painting while working as a draftsman in Paris in the early 1930s. By the middle of the decade, he had switched to surrealism. His surrealist paintings were first called “psychological morphologies.” Later, he changed the name to “inscape” because he thought that his paintings were really the landscape of his mind. But he was never cut off from the rest of the world. He was so affected by the Second World War and the political upheavals that followed it that in the 1950s and 1960s, he started to paint pictures of people and machines in trouble. At the same time, he had a lot of new ideas. In the early 1960s, for example, he often added clay to his paintings to give them a new look. Roberto Matta was a hard worker who worked almost until the day he died in 2002. In that same year, he finished his two most important pieces, “Chaosmos,” which is in the Viersen Sculpture Collection in Germany, and “La Dulce Acqua Vita and La Source du Calme,” which was his last painting.

Roberto Matta was born in Santiago, Chile, on November 11, 1911, to a family with Basque, Spanish, and French roots. Don Roberto Matta Echaurren, his father, owned a lot of lands and was very wealthy. Mercedes Yanez was the name of his mother.

Roberto was always good at being creative, even when he was young. He often made stages with curtains and backdrops and got his cousins to put on shows on them. When his parents saw how artistic he was, they encouraged him to study architecture.

Roberto went to the French Jesuit College of the Sacred Heart when he was young. Next, he went to study architecture and interior design at Pontificia Universidad Católica de Chile. In 1931, he got a degree in architecture from that school.

Roberto spent some time traveling from Peru to Panama after he finished school. He drew many sketches of what he saw. Finally, he became a merchant marine and went to England. He went to Paris from there.

In 1933, Roberto made his way to Paris. There, he worked for Le Corbusier, a famous architect and city planner. During his service, he met a lot of famous painters and saw a lot of their work. He quickly became interested in painting. At first, most of his works were figurative.

In 1936, he quit his job and went to England first, then Spain. In Spain, he got to know Federico Garcia Lorca, Pablo Neruda, and Salvador Dali, who were all surrealist writers. He got to know André Breton because of Dal. Their works had a big impact on Roberto, and he started to understand that there is more to life than meets the eye.

Surrealism is said to have been started by André Breton, who influenced Roberto the most. He not only showed him where to go with his art but also put him in touch with the most important people in the surrealist movement in Paris.

When Roberto Matta went back to Paris, he went back to work as a draftsman. At the same time, he made drawings and wrote articles for the surrealist magazine Minotaure, which was started by Albert Skira and was run by André Breton. These works helped him become known in Paris’s art community.

In 1938, Matta began to make a name for himself as a surrealist painter. This was the year he switched to oil painting and took part in the International Exhibition of Surrealism at the Beaux-Arts Gallery in Paris.

In 1939, Matta left his home country and moved to the United States. There, he made New York his home and met many young artists like Jackson Pollock, Robert Motherwell, and Arshile Gorky. He taught them his technique of “automatic painting,” which later led to the art movement called “Abstract Expressionism.”

In 1940, Matta had his first one-man show at the Julien Levy Gallery in New York. In 1941, he painted “Invasion of the Night,” which is a well-known piece of art. It showed what he would write in the future. In 1942, his works were shown at the Pierre Matisse Gallery in a show called “Artist in Exile.”

When Matta went back to Paris in 1948, his friends were less happy to see him. People think that Matta slept with Mougouch Gorky, who was married to the painter Arshile Gorky. When Gorky killed himself in July 1948, most surrealist artists, including André Breton, thought it was because of this affair and kicked him out of the group.

But the event didn’t have much of an effect on his career. By this time, he was pretty well-known, and his works showed the dislocation and worry of the time after World War II. But in 1950, he left Paris and moved to Rome.
In 1954, Roberto Matta moved back to Paris, where he kept painting. In 1956, UNESCO asked him to make a big mural for their building in Paris.

He no longer lived in Paris all the time. He spent time in both Europe and South America in the 1950s and 1960s. In the 1960s, he started to spend more time on social and political activism, and the surrealism in his works showed how he felt about politics.

Cuba asked Roberto Matta to go to the Havana Cultural Congress in 1968. He talked about art and revolution in this section. Then, for a short time in 1971, he went back to Chile.

In honor of Salvador Allende’s socialist reforms in Chile, he made a 4 x 24-meter mural called “The First Goal of the Chilean People.” Even though the mural was painted over with 16 coats of paint during Auguste Pinochet’s military rule, it has now been fixed up at a cost of $43,000.

In 1995, the Imperial Family of Japan gave Roberto Matta the Praemium Imperiale award on behalf of the Japan Art Association for his important contributions to art.

In 1972, Matta was chosen as one of the 10 best living painters in the world. In the French magazine Connaissance des Arts, the results of this poll were written up.

The first person Roberto Matta married was Patricia Echaurren. They had a son whose name was Pablo. Patricia broke up with him for Pierre Matisse, who was the son of the famous painter Henri Matisse.

He then got married to Anne Clark, an American artist. Sebastian and Gordon Matta-Clark, their twin sons, were born to them. Gordon grew up to be a famous artist, but Sebastian died when he was young.

Matta got married for the third time after his marriage to Anne Clark was thrown out. Federica and Ramuntcho Matta are the children of the marriage. Federica became a famous artist, and Ramuntcho made a name for himself as a director.

Gemana Ferrari was Matta’s fourth and final wife. Their marriage lasted until he died. They only had one daughter, and her name was Alisée. She went on to become a famous designer.

In his last years, Matta lived in Tarquinia, a town 80 km north of Rome in the region of Lazio. There, he set up a pottery studio, gallery, and school. Even though he was old, he was very busy.

He went to Rome a few weeks before he died to see the opening of an exhibition of 50 of his most recent paintings and sculptures.

On November 23, 2002, Roberto Matta died in a hospital in Civitavecchia, which is a town close to his home in Tarquinia. Chile had three days of national sadness after his death.

Roberto is one of the wealthiest painters and is on the list of the most famous painters. Based on what we’ve found on Wikipedia, Forbes, and Business Insider, Roberto Matta’s net worth is about $1.5 million.