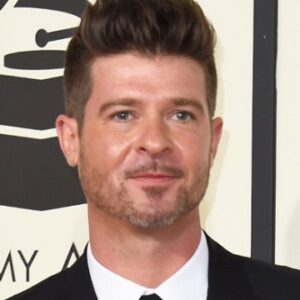 Robin Thicke is a multi-talented singer, songwriter, and television personality. ‘Magic,’ ‘Lost Without U,’ and ‘Sex Therapy’ are some of his most well-known musical songs. His love in singing and performing was instilled in him since he grew up in an artistic family. His parents encouraged him to pursue his passion for music. His father was instrumental in helping him develop and structure his debut songs. Thicke began his career writing songs for a production firm and worked his way up to Interscope Records, where he wrote songs for a number of major music artists. He decided to pursue a singing and songwriting career when he was in his twenties. Christina Aguilera, K. Michelle, Nicki Minaj, Pharrell Williams, Brandy, Jennifer Hudson, Usher, Flo Rida, Kid Cudi, Mary J. Blige, and many others have collaborated with him. His platinum-certified album, ‘The Evolution of Robin Thicke,’ was released in 2006. However, it wasn’t until the release of his first R&B track, ‘Blurred Lines,’ in 2013 that he gained international recognition. The song reached number one on the Billboard Hot 100 in the United States.

Robin Thicke was born in Los Angeles, California, on March 10, 1977. Alan Thicke, his father, was an actor and musician best remembered for his performance in the television sitcom “Growing Pains.” His mother is an actress and singer from the United States who starred in the drama ‘Days of Our Lives.’

During his childhood, Thicke appeared on TV shows such as ‘The Wonder Years,’ ‘Just the Ten of Us,’ ‘The New Lassie,’ and ‘Growing Pains,’ thanks to parental influence. He became interested in songwriting and singing as he approached adolescence.

His parents assisted him in writing songs and learning to play various musical instruments. They did not, however, provide any financial support for his music school since they wanted him to concentrate on his studies before pursuing a career in music.

He signed his first recording contract with Interscope Records when he was 16 years old.
He moved out when he was 17 and began living on his own. He started working as a professional record producer and songwriter to support himself.

McKnight’s producing company was where Robin Thicke began his music career. He co-wrote the song ‘Anyway,’ which appeared on McKnight’s second album, ‘I Remember You.’ With the help of Jimmy Iovine, he landed his first recording contract with Interscope Records when he was 16 years old.

Thicke published his debut album, ‘Cherry Blues Sky,’ totally on his own in 2002.
The lead single from the album was ‘When I Get You Alone.’ The album failed to chart, reaching number 152 on the Billboard Hot 200 with only 63,000 copies sold.

He was dismayed by the album’s underwhelming reception, but he did not give up. He re-released the album with two bonus tracks, ‘She’s Gangsta’ and ‘A Beautiful World,’ under the moniker ‘A Beautiful World.’ This time, luck was on his side, as the album charted at #4 on the Billboard Heatseekers Albums chart.

In 2005, he signed with Star Trak and began work on his second album, ‘The Evolution of Robin Thicke.’ The album’s first track, ‘Wanna Love U Girl,’ which features producer Pharrell Williams, fared well on UK urban radio. In 2006, a remix version of the song was published.

‘Lost Without U,’ the album’s second single, was released in 2006 and became a massive smash, peaking at number one on the Billboard Hot R&B/Hip-Hop Songs chart for 11 weeks. The album’s final two songs, ‘Can U Believe’ and ‘Got 2 Be Down,’ both released in 2007, were also enormous hits.

‘Lost Without U,’ the album’s second single, was released in 2006 and became a massive smash, peaking at number one on the Billboard Hot R&B/Hip-Hop Songs chart for 11 weeks. The album’s final two songs, ‘Can U Believe’ and ‘Got 2 Be Down,’ both released in 2007, were also enormous hits.

Robin published his fifth album, inspired by his family, at the end of 2011. The first song from the album, titled ‘Love after War,’ featured Robin and his wife Paula in a music video. Lil Wayne was also featured on the album’s second hit, ‘Pretty Lil’ Heart.’

Thicke’s 6th studio album, which was released in 2013, yielded his biggest hit song to date. ‘Blurred Lines,’ the album, spawned a song, also titled ‘Blurred Lines.’ In just a few days after its premiere on Vevo, the song’s video, which features Elle Evans, Emily Ratajkowski, and Jessi M’Bengue, surpassed one million views.

The song was a watershed moment in Robin Thicke’s career. It was an international hit, charting at number one in more than 13 countries. Despite the uproar sparked by the song’s shoddy lyrics and music video, the single remained at the top of the charts for several weeks.

Thicke co-starred in the film ‘Making the Rules’ with Jaime Pressly in 2014. He also appeared on the ABC television show ‘Duets’ as a jury member and a mentor. On May 24, 2012, the show premiered to about 7 million viewers.
Following his divorce from Paula Patton in 2014, Thicke released his next album, ‘Paula,’ which was dedicated to her. ‘Get Her Back,’ the album’s lead song, was released on May 19, 2014.

Thicke stayed away from the public for several months after the release of ‘Paula,’ focusing only on his personal life and working on new music. On June 30, 2015, he launched his new album ‘Morning Sun,’ which received a lot of positive feedback from the public.

Thicke’s new single ‘Back Together,’ starring Nicki Minaj, was released on August 6, 2015. He returned to the cast of ‘Real Husbands of Hollywood’ for the fifth season in 2016.

The Evolution of Robin Thicke, Robin Thicke’s second album, sold over 1.5 million copies in the United States and was certified Platinum by the Recording Industry Association of America. The first single, ‘Wanna Love U Girl,’ was a hit on UK urban radio, while the second single, ‘Lost Without U,’ scored at number 14 on the Billboard Hot 100 and topped the Billboard Hot R&B/Hip-Hop Songs chart for 11 weeks.

The album ‘Something Else’ debuted at number three on both the Billboard Top R&B/Hip Hop Albums and the Billboard Hot 200 charts, selling 136,944 copies in its first week.

The single ‘Blurred Lines’ was well received by the public and reached number one on five radio charts at the same time (Top 40, Rhythm, Urban, Hot AC & Urban AC).

Robin Thicke has received eight accolades from various award functions to date. In 2008, his song ‘Lost Without You’ earned the ASCAP Rhythm & Soul Award for ‘Top R&B/Hip-Hop Song.’
He received three Grammy nominations in three different categories for his album ‘Blurred Lines,’ as well as two trophies at the 2013 Soul Train Music Awards.
He won five accolades in 2014, including four Billboard Music Awards and one NAACP Image Award, all for the song “Blurred Lines.”

Robin Thicke began dating actress Paula Patton when he was sixteen years old, and the two married in 2005. Julian Fuego Thicke, the couple’s son, was born in 2010.
Thicke startled his fans when he announced his divorce from his wife in February 2014, after 21 years of marriage and almost nine years together.

Robin Thicke has a net worth of $10 million.

Because of his friendship with Brian McKnight, his pals dubbed him “Brian McWhite.”

He also appeared in ‘The Wonder Years’ season 2 and Episode 4 as a minor character.