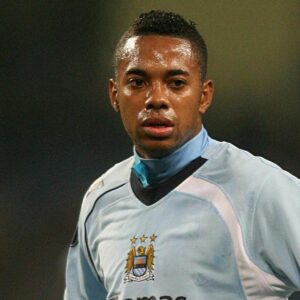 Robinho, also known as Robson de Souza, plays football for Brazil. He has participated in matches for teams in the professional football league, including Real Madrid, Manchester City, and AC Milan. Young Robinho began playing football, and when Pele of Brazil caught his eye, he signed him to his first professional contract. Robinho began his professional career with “Santos FC,” and in 2005, he was able to sign a contract with the Spanish team “Real Madrid.” He spent more than two years playing for “Real Madrid,” where he won two championships, before switching to “Manchester City” in 2008. He began representing “A.C. Milan” in 2010 and won the illustrious “Italian Serie A” championship. He took part in the “Chinese Super League” in 2015, and he helped his side win the competition. He agreed to a two-year contract with the Brazilian football team “Atletico Mineiro” the following year. Robinho has competed for his nation as a professional footballer at two “FIFA World Cups.” While playing for his country’s football team, he also won two “FIFA Confederations Cups” and a “Copa America” championship. He entered into a contract with the Turkish team Sivasspor in 2018.

On January 25, 1984, Robson de Souza was born in Sao Vicente, Sao Paulo, Brazil. His parents, Marina da Silva Souza and Gilvan de Souza raised him. While his father, who was formerly a salesman, is now Robinho’s agent, his mother works as a caterer.

Robinho’s early years were when he first became interested in football. At a very young age, he rose to the position of club captain and scored 73 goals in his first campaign.

When he was only 15 years old, the Brazilian legend Pele became interested in him. Pele designated him as his heir apparent and assisted him in signing a contract with “Santos FC.” Robinho debuted for the club’s senior team at the age of barely 18 years old.

Robinho made his professional debut with Santos FC in the prestigious Campeonato Brasileiro Brazilian league. His club ultimately finished first in the league.

He appeared in 108 games and contributed 47 goals to the team. Numerous European clubs were interested in his performance at the club.

He was signed by Real Madrid in 2005, despite the fact that his play had declined over the season.

During his debut season at “Real Madrid,” Robinho made 37 appearances and scored 14 goals. Robinho’s third league victory was made possible by his contribution to his team’s 30th “La Liga” triumph.

He scored 11 goals and had eight assists for the 2007–2008 “La Liga” season. When he was representing his team in the “Champions League” campaign, he added four more goals to his total. He then sustained an injury and was unable to play for a spell. Robinho rose to become the club’s third-highest scorer while he was a member of “Real Madrid.”

Robinho turned down the club’s new contract in 2008 and chose to join another team as a result of confusion around “Real Madrid’s” desire to sign Cristiano Ronaldo.

He committed to a four-year deal with “Manchester City,” joining the team in September 2008 and making his debut against “Chelsea.” He helped to the team’s 3-1 victory over “Chelsea” by scoring a goal.

He defeated “Stoke City” on October 26, 2008, to record his first hat trick in the Premier League. He contributed a goal to his team’s 3-2 victory over FC Twente in a group stage match of the “UEFA Cup” in November 2008.

With a total of 14 goals, Robinho concluded the season as “Manchester City’s” leading scorer. He finished with the fourth-highest scoring total in the league as well. Due to his injuries, he was unable to play for three months during the second season, but he was still able to participate in 12 games.

He was unable to regularly produce for “Manchester City” as a result of his injury, therefore in 2010 he returned on a six-month loan to his original club, “Santos.” Then, he assisted “Santos” in winning the “Copa Brasil.”

Robinho committed to A.C. Milan for four years on August 31, 2010. He entered the game as a substitute in a 2-0 loss, but soon after, he scored his first goal for the squad and helped them upset “A.C. ChievoVerona” 3-1.
He helped his team win the “Supercoppa Italiana” during the 2011–12 ‘Serie A’ season. He scored a total of 11 goals throughout the “Serie A” campaign, which helped “Milan” win second place.

Robinho hurt himself during his first game versus “Sampdoria,” and then hurt himself again during a workout. In a match against “Malaga,” he returned as a substitute, and the score was a tie.

On November 25, 2012, he then scored a goal against “Juventus.” He resigned from his previous contract with “Milan” on July 18, 2013. He opened the scoring for the “Champions League” on October 22, 2013, in a match against “Barcelona.” He did, however, sustain groin pain after the game.

He suffered numerous injuries all season long. In the team’s “Coppa Italia” campaign, he managed to score a goal despite his injuries against “Spezia Calcio.” He obtained a one-year loan agreement and went back to “Santos” in 2014.

After his return, he scored in the Copa do Brasil title match against “Londrina.” He then scored again while playing “Gremio.”

On September 21, while playing for “Santos,” he scored his final goal of the year while facing “Figueirense FC.” In 2016, he signed a six-month deal with the “Chinese Super League” team “Guangzhou Evergrande Taobao” after canceling all of his previous contracts.

Robinho participated in the 2006 “FIFA World Cup” in Germany as an international player. Then, in 2007, he competed for his country in the “Copa America,” which Brazil won after defeating Argentina. He helped Brazil win the “Confederations Cup” in 2009, which his squad did after defeating the US.

Robinho placed highly in the “Ballon d’Or” and was nominated for various awards at the 2008 “FIFA World Player of the Year.”

In 2004, the mother of Robinho was kidnapped for ransom and returned unharmed six weeks later when the ransom was paid. He wed Vivian Guglielminetti in 2009. Two sons, Robson Jr. and Gianluca were born to Robinho and Vivian.

On November 23, 2017, Robinho was found guilty of sexually assaulting a 22-year-old Albanian woman and was given a nine-year prison sentence by an Italian court. He was in Brazil at the time of sentencing, and under Brazilian law, residents of one nation cannot be extradited to another.

Brazilian professional football player Robinho is valued at $60 million. He won two Campeonato Brasileiro championships throughout his playing career with Santos FC and Real Madrid, as well as a Serie A championship with AC Milan. Robinho was found guilty in 2017 of sexual assault in the gang rape of an Albanian lady and received a nine-year prison term.