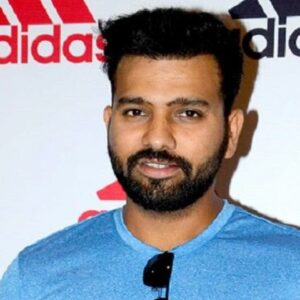 Rohit Sharma is an Indian cricketer who is currently the Vice Captain of the Indian One-Day International and Twenty-20 teams. He is the captain of the Mumbai Indians in the Indian Premier League. For his hard-hitting skills, the right-handed batsman is known as ‘The Hitman,’ and has a record three double-centuries in ODIs, as well as centuries in Test and T20 forms. He began his profession at the age of 20, and his calm and mature performance rapidly gained him recognition. During his early career, though, a tough stretch and an unfortunate injury interrupted his ODI and Test debuts. He was able to demonstrate his abilities as a batsman, occasional bowler, and captain thanks to the new IPL T20 competition. After being promoted to the starting position, he thrived well in limited-over formats. Despite a late Test debut, he made an impression with back-to-back century in his first two games.

Rohit Gurunath Sharma was born on April 30, 1987, in Bansod, Nagpur, Maharashtra, to Gurunath Sharma and Purnima Sharma, the caretaker of a transportation firm’s storeroom. He grew up with his grandparents and uncles in the western Mumbai district of Borivli, and visited his parents every weekend because his father’s earnings were insufficient to sustain him and his younger brother Vishal.

He started interested in cricket at the age of eight and persuaded his uncle to give him Rs.200 to attend a coaching session organized by Dinesh Lad. Lad, who also coached at Swami Vivekanand International School, which had better cricketing facilities, saw his potential and advised him to transfer there.

When Lad learned that his uncle couldn’t afford his tuition, he provided for a four-year sports scholarship for the gifted youngster and encouraged the off-spin bowler to bat first. During the Harris and Giles Shield school cricket tournaments, he went on to strike a century on his debut as an opener.

In March 2005, Rohit Sharma made his domestic cricket debut for West Zone versus Central Zone in Gwalior in the Deodhar Trophy. He made headlines during the same event when he hit an unbeaten 142 in 123 balls against North Zone in Udaipur.

Even before his Ranji debut, he was selected for the NKP Salve Challenger Trophy and made the list of 30 probables for the Champions Trophy, but he did not make the final squad. In July 2006, he made his first-class debut for India A against New Zealand A in Darwin, and then made his Ranji debut for Mumbai in the 2006-07 season, scoring a double-century against Gujarat.

Rohit Sharma made his One-Day International debut against Ireland in Belfast during India’s 2007 tour, but he did not bat in the match. On September 20, 2007, he won the ICC World Twenty20’s ‘Man of the Match’ award for leading India to win with an unbeaten 50 off 40 balls against South Africa.

Because of his maiden ODI half-century against Pakistan in Jaipur on November 18, 2007, he was selected for the 2007–08 Commonwealth Bank Series in Australia. He added two more half-centuries to his tally in Australia, including a 66 in the first final at Sydney during India’s victorious run chase.

A string of poor performances cost him his place in the team’s middle order, and even a triple-century in Ranji could not earn him a spot in the playing eleven during India’s 2009 tour of Bangladesh. In February 2010, after being selected in lieu of an injured V. V. S. Laxman, he was unable to make his test debut due to an injury sustained while playing football during the warm-up session.

In May 2010, he struck two back-to-back century against Zimbabwe and Sri Lanka in a tri-series, but poor form in South Africa denied him a spot in the Indian World Cup squad. In 2011, he won his first ‘Man of the Series’ award against the West Indies for his two half-centuries, including a match-winning 86 off 91 balls after India were reduced to 92-6.

He was elevated to open with Shikhar Dhawan for the Champions Trophy in 2013, following which the duo developed an exceptional connection and guided India to a number of series victories. On a personal level, he smashed 16 sixes in an ODI innings and scored 209 runs off 158 balls against Australia in Bangalore, breaking the global record for most sixes hit in an ODI innings.

In November 2013, he made his test debut during Sachin Tendulkar’s farewell Test series, scoring two back-to-back hundreds to become the third Indian batsman to do so, behind Mohammad Azharuddin and Sourav Ganguly.
His 264 against Sri Lanka in 2014 set a slew of ODI records, including the highest individual ODI score, the first ODI 250, and the first time a player had two double-centuries in a single match.

Career in the Indian Premier League

In the 2008 IPL, Rohit Sharma was recruited by the Deccan Chargers franchise for a fee of US$750,000, and he earned the Orange Cap as the leading run-scorer for a period of time.
In the 2011 season, the Mumbai Indians paid US$2 million for him, and under his leadership, the team won its maiden IPL title in 2013, followed by two more victories in 2015 and 2017.

Due to his successful captaincy for Mumbai Indians in the IPL, he was selected captain of the Mumbai Ranji squad for the 2013–14 season when Ajit Agarkar retired. With Captain Virat Kohli out, he was named captain of the Indian side for the Sri Lanka series in December 2017, and they won 2-1 and 3-0 in the ODI and T20 series, respectively.

Apart from multiple ‘Man of the Match’ and ‘Man of the Series’ honours, Rohit Sharma was honored by the Indian government with the ‘Arjuna Award’ in 2015.
He has three ODI double century, the most by any player, including the greatest individual ODI score of 264 against Sri Lanka.

With his 106 in the first T20I against South Africa at Dharamshala on October 2, 2015, he became the second Indian cricketer after Suresh Raina to make hundreds in all formats of the game.
He was the captain of the Mumbai Indians team that won three IPL titles. He is also the fifth player in IPL history to score a hat-trick.

Rohit Sharma married Ritika Sajdeh, his friend, manager, and six-year girlfriend, on December 13, 2015, after being introduced to her by veteran player Yuvraj Singh in 2008. They live at Ahuja Towers, Worli, Mumbai, in a four-bedroom apartment.

Rohit Sharma has a total net worth of $25 million.

Rohit Sharma kept a promise he made to his parents when he moved them from their modest single-room house in Dombivili to a swanky neighbourhood in Borivali three years into his cricket career. His younger brother Vishal’s travel to Florida to study hotel management was also paid for by him.