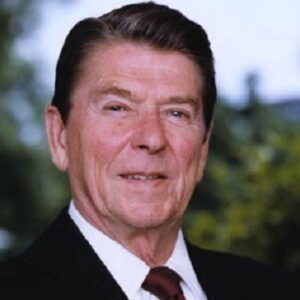 Turn the pages of American political history and you’ll come across a name that changed the country’s political and economic situation for the better — Ronald Reagan. Reagan served as California’s 33rd governor for two terms before being elected 40th president of the United States of America in 1981, a position he maintained until January 1989. However, a look into the life of this renowned figure reveals a sharp contrast between his early and later years that leaves one bewildered. It’s worth noting that, before to entering politics and pursuing a long career in the area, Reagan worked in the entertainment industry as a radio sports announcer and actor. Reagan even hosted several television series and served as the president of the ‘Screen Actors Guild.’ He died of pneumonia on June 5, 2004, at his home in Los Angeles, California, after a long and illustrious career that included numerous awards and distinctions.

Ronald Wilson Reagan was born in Tampico, Illinois, to John Edward ‘Jack’ Reagan and Nelle Wilson Reagan on February 6, 1911. Neil, his older brother, was his only sibling. Reagan was nicknamed “Dutch” because of his Dutchman-like features. This nickname stuck with him throughout his childhood.
He received a scholarship to study economics and sociology at ‘Eureka College’ after completing his preliminary education at ‘Dixon High School.’ While he excelled academically, his achievements as an athlete and actor earned him the position of student body president.
He worked as a radio sports broadcaster in Iowa after graduating in 1932, and then he was employed by ‘WHO’ radio. Following a screen test with the ‘Warner Brothers,’ he signed a contract with the studio in 1937.
He appeared in a number of films over his three-decade Hollywood career. Despite the fact that he began his acting career in ‘B-movies,’ his work was well received by both audiences and reviewers. ‘Knute Rockne, All American’ and ‘Kings Row’ were two of his most popular films.
Meanwhile, in 1937, he enlisted in the ‘Army Enlisted Reserve,’ and was called to active duty in 1942. He was only eligible for limited duty in the ‘Army Air Forces’ due to his nearsightedness (AAF). Soon after, he was promoted to first lieutenant and then captain. He was released from active duty in 1945.
He was the president of the ‘Screen Actors Guild’ from 1947 until 1952. In 1959, he was elected president for the second time. He went on to host the show ‘General Electric Theatre,’ which aired on television. After that, he hosted a show called ‘Death Valleys Days.’

His political views moved from liberal to conservative throughout his time as a television broadcaster. In 1964, he rose to prominence as a result of a speech he gave in support of Republican presidential candidate Barry Goldwater.
He ran for governor of California in 1966 and won by nearly a million votes. In 1970, he was re-elected for a second term, serving until January 1975.
He ran for President in 1980, establishing himself as a ‘Republican Party’ conservative candidate. The election result was enthralling, as he easily trounced Democratic President Jimmy Carter, receiving 50.7 percent of the vote.
On January 20, 1981, he was sworn in as President of the United States of America. In his inauguration address, he called for a rebirth of the country and the government, which he referred to as “the problem” rather than “the solution.”
On his 69th day in office, when he was moving out of the ‘Washington Hilton Hotel,’ Reagan was shot and injured in an assassination attempt by John Hinckley Jr. After undergoing emergency surgery, he recovered and became the first US president to survive an assassination attempt.
Several social, economic, domestic, and international measures were implemented during his presidency. He increased the military budget, cut the cost of several social programs including ‘Medicaid,’ ‘Food Stamps,’ and government education programs, and deregulated companies. He removed domestic oil price regulations, allowing for an unrestricted supply of energy in the 1980s.
He recommended cutting marginal tax rates in an attempt to resuscitate the American economy, which resulted in increased investment, improved economic growth, and higher employment and wages. His economic measures resulted in the nation’s economy reviving in 1983, marking the start of seven years of economic success.
During his first term as president, the ‘Cold War’ was the most pressing subject in international policy. He ordered a build-up of weaponry and troops to defend the country against the Soviet Empire. He also established the “Reagan Doctrine,” which aided anti-communist organizations in Africa, Asia, and Latin America. He also intended to create space-based weapons to defend the United States against Soviet nuclear missiles.
His attempt to keep the peace in Lebanon was thwarted when suicide bombers attacked the US Marine barracks in Beirut, killing 241 Americans. In retaliation, he authorized the invasion of Grenada, a Caribbean island. He achieved a landslide victory over Democratic nominee Walter Mondale in the 1984 presidential election, receiving 525 of 538 electoral votes. It was the most votes ever gained by a presidential contender in the United States.
During his second term as president, he enacted tough anti-drug legislation and pledged drug-free schools and workplaces. In addition, he implemented strict drug enforcement and increased public awareness.
The ‘Iran-Contra affair,’ a complicated ‘arms-for-hostages’ arrangement with Iran to send money into anti-communist insurgencies in Central America, tainted most of his second administration.
When Reagan paid a visit to a German military cemetery in Bitburg to commemorate the end of “World War II” in 1985, he sparked controversy. When it was discovered that Nazi war criminals from the ‘Waffen-SS’ were also buried there, he was chastised.
The United States struck Libya in 1986 under the codename “Operation El Dorado Canyon.” The operation was carried out because Libyan leader Muammar Gaddafi was a member of the ‘Unholy Trinity,’ a group that supported the Red Army faction and the Red Brigades. The United States was concerned that ‘Unholy Trinity’ was attempting to become a nuclear power.
During his second tenure as president, in 1987, the United States and the Soviet Union negotiated a historic deal to eliminate intermediate-range nuclear weapons. He also played a key role in the fall of the Berlin Wall. When US President Donald Trump withdrew the deal, alleging Russia’s non-compliance, it became obsolete. Both parties formally suspended the pact in February 2019.
In January 1989, he evacuated the ‘White House’ and returned to his residence in Los Angeles, California, after serving as president for two consecutive terms. In Simi Valley, California, the ‘Ronald Reagan Presidential Library and Museum’ opened in 1991.

He was awarded the ‘American Presidential Medal of Freedom,’ the ‘Republican Senatorial Medal of Freedom,’ the ‘Congressional Gold Medal,’ the ‘Honorary Knight Grand Cross of the Order of the Bath,’ and Japan’s ‘Grand Cordon of the Order of the Chrysanthemum.’ Several schools, organizations, buildings, roads, and airports bear his name and serve as testaments to his illustrious career as the 40th President of the United States. Numerous sculptures of him have also been unveiled around the world.
In 2005, the ‘United States Postal Services’ released a commemorative postage stamp with his portrait. In 2006, he was admitted into the ‘California Hall of Fame’ at the ‘California Museum’ after his death. In 2007, he was posthumously awarded the highest Polish honor, the Order of the White Eagle. He was also selected on TIME’s list of the “100 Most Important People of the Twentieth Century.”
Arnold Schwarzenegger signed a senate bill declaring February 6th as “Ronald Reagan Day” in 2010.

He married actress Jane Wyman in 1940, and they had three children, one of whom was adopted and the other died in infancy. In 1949, Reagan and Wyman divorced.
In 1952, he married Nancy Davis. Patti and Ron, their two children, were born to them as a couple.
In 1994, he was diagnosed with Alzheimer’s disease. He died on June 5, 2004, after succumbing to pneumonia exacerbated by Alzheimer’s disease.
In California, his mortal remains were interred at the ‘Ronald Reagan Presidential Library.’ The ‘Washington National Cathedral’ hosted a state funeral, and President George W. Bush announced June 11 to be a national day of mourning.

Ronald Reagan has a Net Worth of  $13 Million.

This historic politician was a radio sports broadcaster and actor before becoming the 33rd governor of California and the 40th president of the United States. Reagan and his then-wife Jane Wyman were secret agents for the ‘FBI’ in Hollywood before entering politics.