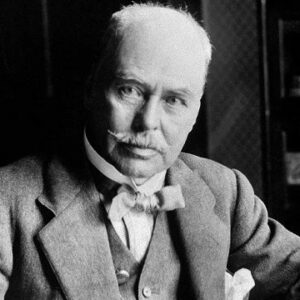 Sir Ronald Ross was a well-known British physician who was born in India and is most known for his scientific work on malaria, the parasite that causes the sickness, and the mosquito that spreads it. When he first started working, he was desperate to investigate the signs of malaria. He was a graduate of ‘St Bartholomew’s Hospital Medical College,’ ‘Society of Apothecaries,’ and ‘Royal College of Surgeons.’ After meeting his mentor, Patrick Manson, he was sure that India would be the finest location for this research. His research was first hampered by the fact that malaria did not impact every region of the country. Furthermore, finding malaria-infected human volunteers was difficult, so he had to rely on observations made by birds. Despite all odds, he was successful in determining the causes of the sickness, earning him the Nobel Prize in Medicine a few years later. This diligent physician has also produced numerous reports and publications based on the trials he performed and the conclusions he reached. In particular, his book ‘The Prevention of Malaria’ is regarded as significant in the history of medical literature. His contribution to medicine is now well recognized, and he has received numerous awards across the world.

Ronald Ross was born in Almora, India, on May 13, 1857, to Sir Campbell Claye Grant and Matilda Charlotte Elderton.
His uncle and aunt raised him as a child on the Isle of Wight, England. He received his primary education in Ryde schools before enrolling in a residential school in Springhill in 1869.

He excelled in literature, music, and arithmetic in school, and he was especially gifted in painting. He wanted to be a writer, but his father persuaded him to enroll in London’s ‘St Bartholomew’s Hospital Medical College’ in 1874.

After passing the ‘Royal College of Surgeons’ examinations, the young man was hired as a surgeon on a ship in 1879. He was also working toward a degree from the ‘Society of Apothecaries’ at the same time.

He spent a few months studying at the ‘Army Medical School’ in Washington before entering the ‘Indian Medical Service’ in 1881.

Ross worked as an Acting Garrison Surgeon in Bangalore, British India, in 1883. During his time there, he discovered a method of controlling mosquito breeding.

When the young doctor visited London in 1894, he had the opportunity to meet Scottish physician Sir Patrick Manson, who believed that India was the ideal location for studying malaria and the problems associated with it.

He arrived at Secunderabad in 1895 and immediately went to the ‘Bombay Civil Hospital’ to perform malaria experiments. It was here that he examined the parasite located within a mosquito’s stomach.

His trials were cut short when he was unexpectedly assigned to Bangalore, where he had to treat cholera patients instead of pursuing malaria research.

He noticed a mosquito with an unusual attitude while visiting Sigur Ghat near Ooty, Tamil Nadu. Ross termed it the “dappled-winged” mosquito since he didn’t know what species it was.

He returned to Ooty in 1896, this time with the goal of performing malaria research. Despite taking precautions such as quinine prophylaxis, he became ill with the sickness. Ronald was unable to complete his observations and was obliged to return to Secunderabad.

Ross ultimately managed to grow 20 adult mosquitoes the following year, from which he obtained larvae. Following feeding these mosquitoes blood from a man who was paid eight annas, he discovered a foreign cellular structure inside the insect after dissection. The parasite that causes malaria in humans was determined to be this alien substance.

His discovery was sufficiently noteworthy that the ‘British Medical Journal’ published it in 1897. The female Anopheles mosquito evolved from the “dappled-winged” mosquito.

Ronald was quickly relocated to Bombay and subsequently Rajasthan, but his study work was hampered by a lack of cases. Following that, he stayed in Calcutta because his instructor, Patrick Manson, requested it from the British government.

In 1898, the eager doctor sought employment at Calcutta’s ‘Presidency General Hospital,’ where he could continue his research on ailments such as malaria and kala azar. Muhammed Bux, Kishori Mohan Bandyopadhyay, and Purboona were hired as lab apprentices, but the latter left the project soon after.

He started studying malaria-infected birds, however he wasn’t entirely happy with his decision. However, the symptoms were quite similar to those of humans, and he discovered that the parasites were hiding in mosquito salivary glands.

The next year, he traveled to Assam to witness the effects of kala azar after the epidemic had ravaged the state. He worked at the ‘Labac Tea Estate Hospital,’ supporting Dr. Graham Col Ville Ramsay in his quest to discover what causes kala azar.

The endeavor failed, however, because, contrary to Ross’ belief, sand-flies, not mosquitoes, were the disease’s carriers.

Ronald came to Liverpool, England, in 1899 to work as a professor at the ‘Liverpool School of Tropical Medicine.’ He maintained his malaria study not just in India but also in other countries such as Mauritius, Africa, and Greece throughout his time in England.

In the year 1902, he was promoted to Chairperson of the ‘Liverpool School of Tropical Medicine.’

In a paper published in 1908, Ross attempted to link the study of the causes, symptoms, and effects of malaria to mathematics. He also wrote a book called ‘The Prevention of Malaria,’ which detailed his research.

The outstanding specialist was employed as a Physician for Tropical Diseases at London’s ‘King’s College Hospital’ in 1912. At the same time, he was the head of the ‘Liverpool School’s Tropical Sanitation department.

Ross worked as a Malariology consultant for the ‘British War Office’ and the ‘Ministry of Pensions and National Insurance’ from 1917 to 1926.

He became the Director-in-Chief of the ‘Ross Institute and Hospital for Tropical Diseases’ in 1926.

Ross is well-known for his contributions to the subject of Malariology, where he discovered the disease’s source, the type of the parasite, and the mosquito species that transmits it. He has written several publications on the subject, including ‘The Prevention of Malaria,’ among others.

Ross received the Nobel Prize for Medicine in 1902 for his groundbreaking study on the causes and effects of malaria.

Sir Ronald was created a Companion of the Most Honourable Order of the Bath by King Edward of England in the same year.

The ‘Caroline Institute’ in Sweden gave him an honorary degree in medicine in 1910.

Ronald got the ‘James Tait Black Memorial Prize’ for his autobiographical book ‘Memoirs’ in 1923, a literary honor.

The Nobel Prize for malaria research was meant to be split between the English doctor and Giovanni Battista Grassi, an Italian physician. However, the two scientists disagreed, and Robert Koch, a member of the awarding committee, declared that Ross was the winner.

The ‘Ronald Ross Memorial’ was dedicated at the ‘SSKM Hospital’ in Kolkata in 1927 by the great physician himself.

After suffering from asthma and other medical issues, this distinguished physician passed away on September 16, 1932. He was laid to rest with his wife, Rosa, in London’s ‘Putney Vale Cemetery.’

The ‘London School of Hygiene & Tropical Medicine’ has established August 20 as ‘World Mosquito Day,’ commemorating the day this famed scientist discovered the source of malaria.

The ‘Sir Ronald Ross Institute of Tropical and Communicable Diseases’ in Hyderabad is one of several medical institutions and hospitals named after this accomplished physician.

Several roads in Calcutta, Secunderabad, and the United Kingdom have been named in his honor.

The estimated net worth of Ronald Ross is unknown.

This extraordinary doctor was also a gifted writer, having written several books and poetry, including ‘In Exile,’ ‘The Child of Ocean,’ and ‘The Spirit of Storm.’