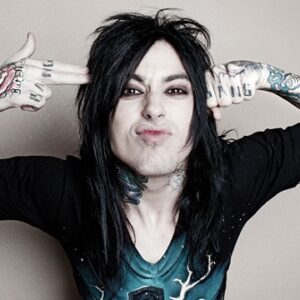 Ronald Joseph Radke is a singer, composer, and record producer from the United States. He is a founding member of the popular American rock band ‘Falling in Reverse,’ as well as the band’s lead vocalist, guitarist, and keyboardist. Radke was born in the United States, in the city of Las Vegas. He had a difficult upbringing. He turned to music for comfort and learnt to play the piano and guitar. During his high school years, he created various bands and began creating songs, which included ‘Listen Up’ and ‘Besides the Issues.’ With the support of a close friend, Nason Schoeffler, he formed the band ‘Falling in Reverse’ in his early twenties. They published their debut studio album, ‘The Drug in Me is You,’ a few years later. The album was a major hit, reaching number 19 on the Billboard 200 in the United States. With ‘Falling in Reverse,’ Radke released three more successful full-length studio albums over the next few years. Despite his celebrity and name, Radke has also become known for his involvement in violent occurrences. Radke was arrested once for his role in a fight that resulted in the shooting of a teenage boy. He was given a four-year prison sentence. He was, however, released after two and a half years in prison.

Childhood and Adolescence of Ronnie Radke

Ronald Joseph Radke was born in the United States on December 15, 1983, at St Rose Hospital in Las Vegas, Nevada. He grew up with his father, grandmother, and older brother after his mother abandoned the family when he was a child. Because his family was impoverished financially, he had to go through a lot as a kid.
Radke grew up with a passion for music and began to play the guitar and piano at a young age. His passion for music was so strong that he had to flee his home to join his first band. During his high school years, he was a member of multiple bands and performed in a variety of settings.
He also developed friendships with a number of musicians during this time. ‘Beside the Issues’ and ‘The Worst Time’ are two of the early songs he wrote during his adolescent years.

Ronnie Radke and Max Green, Robert Ortiz, and Omar Espinosa established the band ‘Escape the Fate’ in 2004. After winning a radio contest judged by My Chemical Romance, their career took off.
Radke chose to create a new band in late 2006 due to personal conflicts with his previous band. He formed the band ‘Behind the Walls’ with the support of his friend Nason Schoeffler. It was then renamed ‘Falling in Reverse.’ Radke was caught in 2008 and served time in prison. In December of 2010, he was released.

He rejoined Falling in Reverse, and the band’s debut album, ‘The Drug in Me Is You,’ was released on Epitaph Records on July 26, 2011. The album was a major hit, reaching number 19 on the Billboard 200 in the United States. It also charted in several other countries, including Australia, Canada, and the United Kingdom.

Radke announced in May 2012 that he was working on his second studio album. He recorded a solo song called “The Fairweather Fans” after launching his YouTube channel in 2013. His band’s second album, ‘Fashionably Late,’ was published in June 2013, shortly after the release of his second song, ‘What Up Earth?’
‘Just Like You’ and ‘Coming Home,’ the band’s third and fourth albums, were released in February 2015 and April 2017, respectively. Both works had a moderate level of success.

Major Works’ ‘Escape the Fate EP,’ which was Ronnie Radke’s first professional effort with the band of the same name. ‘Not Good Enough for Truth in Cliché,’ ‘Chariot of Fire,’ and ‘As You’re Falling Down’ were among the six tracks included.

On October 3, 2006, Radke collaborated with the band ‘Escape the Fate’ on the studio album ‘Dying Is Your Latest Fashion,’ which was produced by Epitaph Records. ‘Reverse this Curse,’ ‘Cellar Door,’ and ‘Friends and Alibis’ were among the nine songs on the CD. The album reached No. 12 on the US Top Heatseekers chart and No. 19 on the US Top Independent Albums chart, making it one of Radke’s most successful efforts. The majority of the feedback was good.

Radke’s band ‘Falling in Reverse’ released their first album, ‘The Drug in Me is You,’ which was produced by Epitaph Records. ‘Tragic Magic,’ ‘The Drug in Me is You,’ ‘I’m Not a Vampire,’ and ‘Pick Up The Phone’ were among the eleven tracks on the album, which was released on July 26, 2011. The album was a major hit, reaching number 19 on the Billboard 200 in the United States. Within the first week, 18,000 copies were sold. It was also a tremendous hit in other nations including Australia and Canada.

Another of Radke’s notable works is ‘Fashionably Late,’ another ‘Falling in Reverse’ record produced by Epitaph Records. ‘Champion,’ ‘Bad Girls Club,’ Alone, ‘Fashionably Late,’ and ‘It’s Over When It’s Over’ were among the 12 tunes on the album. It was a big success, and it peaked at number 17 on the US Billboard 200, just like his prior work. It was also a hit in Australia and the United Kingdom, reaching Number 20 on the Australian Albums Chart and Number 75 on the UK Albums Chart.

With ‘Falling in Reverse,’ Radke released his most recent studio album, ‘Coming Home.’ The album was released in April 2017 and was produced by Epitaph Records. The album reached number 34 on the US Billboard 200, with 11 tracks including ‘Coming Home,’ ‘I Hate Everyone,’ ‘Straight to Hell,’ and ‘The Departure.’ The majority of the feedback was good.

Ronnie Radke was named one of Revolver Magazine’s 100 Greatest Living Rockstars (2011) and Kerrang’s 50 Greatest Rock Stars in the World Today (2012).

Ronnie Radke has a daughter named Willow Grace Radke with Crissy Henderson, with whom he was previously engaged. Their romance ended, though, when he admitted to cheating on her. Caroline Burt has been his girlfriend since 2015.

Estimated Net Worth of Ronnie Radke

How much wealth would a person have if he or she has released multiple albums in their career? е а vеrу uссеful ngеr whо hа rеlеаеd a lot with two bands in his career. With this, he has created a network worth more than $5 billion by 2022. I’m also a rесоrd рrоduсеr and a very talented individual. He’s also released the collaborative singles “Nobody Like Me,” “Day Go By,” “Gеtting vеr Yоu,” and “Fоr Yоu.”