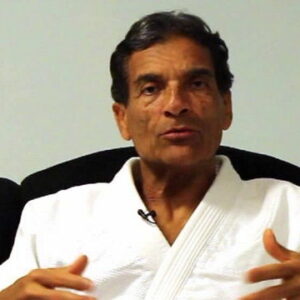 Brazilian American Jiu-Jitsu Grand Master Rorion Gracie. He is Hélio Gracie’s oldest child and a well-known Gracie family member. He is also a co-founder of the Ultimate Fighting Championship as well as a professor, author, producer, and publisher (UFC). He is credited with bringing Brazilian Jiu-Jitsu to America as well as the rest of the world. He is one of the 9th degree red belt holders in the art. Gracie has served as an extra in television shows and motion pictures and was once named “Instructor of the Year” by “Black Belt Magazine”. His modest screenwriting contributions include choreographing Rene Russo and Mel Gibson’s fight scenes in the movie “Lethal Weapon.” The documentary “Gracie Jiu-Jitsu In Action” was made by Gracie in his capacity as a producer. Additionally, he is the author of the book “Gracie Diet.” Millions of people follow the Brazilian American Jiu-Jitsu Grand Master throughout the world on Facebook and Instagram. People of all ages, particularly those who are engaged in martial arts, greatly respect Gracie.

Young Rorion Gracie began studying jiu-jitsu under the instruction of his father, Hélio Gracie. He started acting as an extra in movies and television in 1978. Gracie welcomed people to practice Jiu-Jitsu in an effort to propagate the culture of martial art. In his garage, he began imparting his father’s Jiu-Jitsu knowledge.

The martial artist was employed to choreograph the battle scenes in the film “Lethal Weapon” in the early 1980s. Then, in the latter half of the 1980s, Gracie created the film “Gracie Jiu-Jitsu In Action.”

Four years after opening the Gracie Jiu-Jitsu Academy in the United States, in 1993, he collaborated with businessman and promoter Art Davie to launch the Ultimate Fighting Championship (UFC). Seven of the most well-known martial artists in the world were recruited by Gracie to compete in a single-elimination match.

Soon after, he received a request to develop a hand-to-hand combat school based on the most effective Gracie jiu-jitsu techniques from a number of senior US military soldiers. After giving it some thought, Gracie came up with Gracie Survival Tactics (GST). All US military groups and significant law enforcement organizations now provide this course.

Helio Gracie and his wife welcomed Rorion Gracie into the world on January 10, 1952, in Rio de Janeiro, Brazil. He has six brothers who are also skilled in jiu-jitsu: Robin, Relson, Rickson, Royce, Royler, and Roller. He studied law at the Federal University of Rio de Janeiro and graduated.

The Brazilian American Jiu-Jitsu Grand Master has 10 children in all, including Rener and Ralek, and resides in Southern California with his wife Silvia. Gracie has taught his kids the sport and hopes they will carry on the legacy for future years.

Brazilian martial artist, author, and publisher Rorion Gracie is worth $50 million. In January 1952, Rorion Gracie was born in Rio de Janeiro, Brazil. He co-founded the Ultimate Fighting Championship and is a member of the illustrious Gracie family. Gracie was instructed by his father Helio Gracie and currently has a 9th-degree red belt in Brazilian Jiu-Jitsu.