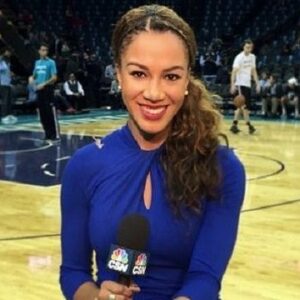 Rosalyn “Ros” Gold-Onwude is an American sports reporter and analyst who has won an Emmy Award. She covers the NBA on TNT, men’s and women’s college basketball for Pac-12 Networks, the men’s NCAA Tournament for CBS, and the WNBA’s New York Liberty on the MSG Network. She joined Comcast SportsNet’s Sunday coverage of the San Francisco 49ers after three seasons as a local sideline reporter for NBC Sports covering the Golden State Warriors. She covered the U.S. basketball team that won a gold medal at the 2016 Rio Olympics in Brazil. She accepted the offer to play for the Nigerian national basketball team after consulting ESPN because her father was born there, and in 2011 she helped the team reach the Fiba-Africa Olympic Qualifier tournament’s semifinals. She was the rapper Drake’s date as he arrived at the red carpet of the inaugural NBA Awards in 2017, which he also served as host of.

Prior to landing her big break in television, Ros Gold-Onwude worked a variety of odd jobs. She worked briefly at Tesla Motors right after graduation but ultimately chose to pursue sports broadcasting. She worked a variety of part-time jobs, including seasonal internships at Nike, tutoring Stanford students in public speaking, and serving as a production assistant for the school radio station.

She also produced digital content for Stanford that covered all the sports at the same time. She also contributed to the school newsletter, which featured recruiting updates for Stanford football. To have her rent reduced, she even had to coach the basketball team of her landlord’s daughter because she made so little money.

Her family was going through financial difficulties at this time due to family members’ illnesses. She even pondered quitting the industry out of frustration and using her master’s degree to her advantage to find a regular career. But once she started creating a digital program about women’s basketball, something miraculous happened.

She secured a free weekly show through her connections at PAC-12 Networks, giving her visibility and leading to the first television contract. After covering the Golden State Warriors sidelines since they won the NBA title in 2014–15, she gained some notoriety in the Bay Area. After her intention to relocate to TNT was made public, she became so well-known that admirers showered her with love and well-wishes.

Basketball was Ros Gold-teen Onwude’s sport at Molloy High School. She was a member of the 2003 and 2004 state champion school teams. She graduated from the school as its second-leading scorer all-time and as the all-time leader in steals and assists, despite having to end her senior season early due to a knee injury.

She was the first Molloy athlete to be honored with a spot in the “GCHSAA Hall of Fame” in 2011. In addition, she was the first sportsperson in the school’s record to accept a scholarship to Stanford University, where she played Division I basketball. She played as the starting point guard for the 2005–06 squad for head coach Tara VanDerveer during her first year at Stanford.

After suffering a second knee injury, she was forced to redshirt the whole 2006–07 season, but she came back the next year as a shooting guard. She participated in three Last Fours and two national championship games while playing for Stanford, and in her final season, she was honored as the Pac-10 Defensive Player of the Year. She also assisted the Cardinals in their four conference championships as the starting guard. She continues to play basketball frequently despite having a great profession as a reporter and an analyst.

As a reporter, Ros Gold-Onwude has had a lot of support from her audience, but she has also been the target of several internet memes, which occasionally make her laugh but frequently make her feel vulnerable and insecure. When she was interviewing Klay Thompson, she made a comment regarding his effectiveness on both offense and defense, which turned out to be a double entendre.

This was the first time she found herself in a meme situation. However, she became the object of unwelcome attention and even cyberbullying from women in particular after a meme of her and Ayesha Curry during a post-game interview with Steph Curry surfaced.

Pat Gold and Austin Onwude welcomed Ros Gold-Onwude into the world on April 28, 1987, in Queens, New York. She went to Briarwood, New York’s Archbishop Molloy High School. She obtained both her Master’s degree in Sociology of Organizations, Business, and the Economy and her Bachelor’s degree in Communications from Stanford University.

By giving her college tapes, her mother—Coach Tara VanDerveer’s roommate at the State University of New York in Albany—helped her get a Stanford scholarship. After agreeing to a contract with Turner Sports in late 2017, she relocated to Atlanta.

One of the wealthiest and most well-known sportscasters is Rosalyn Gold-Onwude. Rosalyn Gold-net Onwude’s worth is estimated to be $1.5 million based on our research of Wikipedia, Forbes, and Business Insider.