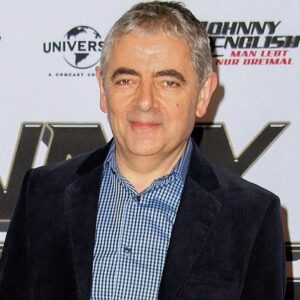 Rowan Atkinson is a well-known British comedian and writer best known for his portrayal of ‘Mr. Bean’ in the blockbuster television series and two feature films of the same name. He’s a man with a supple face who can go from total clown to snobby grandee in a couple of seconds. He discovered his comedic talent while at Oxford University, and there has been no looking back since. He has captivated audiences with his portrayal in ‘The Black Adder,’ in addition to the rib-tickling ‘Mr. Bean’ comedy series. He is well-known for his dark humor and physical comedy skills. He met future screenwriter Richard Curtis during his early years, and the two collaborated on comedic lampoons at the Oxford Playhouse and then at the Edinburgh Fringe. This earned him local fame and a role in the popular television comedy series ‘Not the Nine O’ Clock News,’ which he both wrote and starred in. He made his film debut in the James Bond thriller ‘Never Say Never Again,’ and went on to star in films such as ‘The Witches,’ ‘Four Weddings and a Funeral,’ ‘The Lion King,’ ‘Bean,’ ‘Johnny English,’ and ‘Keeping Mum,’ among others.

Rowan Sebastian Atkinson was born in County Durham, England, on January 6, 1955, to Eric Atkinson and Ella May. He is the youngest of the couple’s four children and was raised as a devout Anglican. He went to Durham Choristers School, St. Bees School, and then Newcastle University, majoring in Electrical Engineering. He pursued his Electrical Engineering studies at Queen’s College, Oxford, in 1975. He met future screenwriter Richard Curtis at this time, and the two collaborated on sketches for the Oxford Playhouse and the Edinburgh Festival Fringe the following year.

In 1978, he began his acting career by performing in a series of BBC Radio 3 comedy programmes called ‘The Atkinson People.’ He did a one-of-a-kind pilot for a sitcom called ‘Canned Laughter’ the following year. He co-starred with Pamela Stephenson, Mel Smith, Griff Rhys Jones, and Chris Langham in the television comedy sketch show ‘Not the Nine O’ Clock News’ in 1979. His show brought him broad local acclaim, and he went on to star in the medieval sitcom ‘The Black Adder,’ which premiered in 1983 and ran for the next decade. He co-wrote the program with Richard Curtis once more.

In 1983, he made his film debut in the James Bond blockbuster ‘Never Say Never Again,’ in which he played a supporting role. He was cast in the lead role in the film ‘Dead on Time’ the same year.

While filming the ‘Black Adder,’ he was called for the ‘Just for Laughs’ festival in Montreal from 1987 to 1989. He was also cast in ‘The Appointments of Dennis Jennings’ and ‘The Tall Guy’ around this time. He was cast as the miserable, clown Mr. Bean in the show ‘Mr. Bean’ in 1990. Atkinson had no idea that this series would change his life and solidify his status as one of the greatest British actors and comedians of all time. He was also cast in the film adaptation of Roald Dahl’s classic, ‘The Witches,’ around the same period.
In 1994, he became more well-known for his roles in the films ‘Four Weddings and a Funeral’ and ‘The Lion King,’ as well as his voicing for the bird Zazu in Disney’s ‘The Lion King.’

A number of ‘Mr. Bean’ sequels were made, and they aired on television until 1995. Two years later, he was cast in ‘Bean,’ a film adaptation of the popular television series. He was also cast as Inspector ‘Raymond Fowler’ in ‘The Thin Blue Line’ during this time.

Between 2001 and 2003, he acted in a number of films as a supporting actor, including ‘Rat Race,’ ‘Johnny English,’ ‘Scooby-Doo,’ and ‘Love Actually.’ Two years later, he acted alongside Maggie Smith, Patrick Swayze, and Kristin Scott Thomas in the crime comedy ‘Keeping Mum.’

In addition to his supporting roles, he had another hit with a sequel to the first ‘Bean’ picture, dubbed ‘Mr. Bean’s Holiday,’ which was released in 2007. He made his stage debut two years later in the musical ‘Oliver!’ directed by Rupert Goold.

In 2011, he starred in the sequel to the James Bond parody ‘Johnny English Reborn,’ which was a box office success. The following year, he made an official announcement that he was retiring from the role of ‘Mr. Bean,’ and that no more series or films based on the character would be produced.
In 2013, he played an ostensible role in a London theatrical performance of the play “Quartermine’s Terms.”

Richard Curtis and Rowan Atkinson co-wrote and starred in the 1983 popular series ‘The Black Adder,’ which also starred Atkinson. This show was voted the’second-greatest British sitcom of all time,’ as well as the ’20th best TV show of all time.’ Edmund Blackadder was played by Rowan Atkinson, who distinguished himself as one of the best actors of his generation. His part as ‘Mr. Bean’ in the ‘Mr. Bean’ series, which premiered in 1995, is regarded as one of his magnum opuses because it is thought that he conceived the character while in college and had always wanted to play one. He charmed audiences with his one-of-a-kind physical humor and his interactions with various individuals and settings as a personality who ‘rarely talked’ on television. For his portrayal, Atkinson became a national sensation, and the series was so popular that it generated two film versions during its successful five-year run on television.

In 2013, he was awarded the rank of ‘Commander of the Order of the British Empire.’

Louise Ford has been Rowan Atkinson’s girlfriend since 2014. In December 2017, she gave birth to Atkinson’s third child. He has expressed his support for the ‘Modify Section 5 campaign,’ which aims to reform or eliminate Section 5 of the Public Order Act 1986, which is considered as limiting freedom of expression. He is a car enthusiast and racer in addition to his acting job. He has also been on the popular television series ‘Top Gear’ and ‘Full Throttle.’ He has written for a variety of vehicle magazines and has appeared on the popular television shows ‘Top Gear’ and ‘Full Throttle.’
He’s raced Aston Martins and owns a McLaren F1, a Honda NSX, an Audi A8, and a Honda Civic Hybrid.

Rowan Atkinson has a net worth of $150 million.

While on vacation in Kenya, the pilot of this famous British comedy actor from The Black Adder passed out, and this celebrity managed to keep the plane in the air for many minutes until the pilot recovered consciousness. In his film Johnny English, this well-known British actor drove his Aston Martin DB7 Vantage.