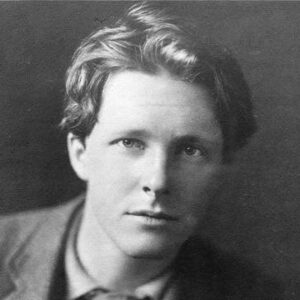 Rupert Brooke was an English poet best known for his poem “The Soldier,” one of five military sonnets he wrote. His father, William Parker Brooke, was a Rugby schoolmaster at the Rugby School, and his mother, Ruth Mary Brooke, was a Rugby schoolteacher at the Rugby School. After graduating from his father’s school, he attended King’s College in Cambridge. He was already born with boyish good looks, but he also proved to be incredibly intelligent and athletic, and he became well-known at college. He formed friendships with his contemporaries while studying and became a member of a number of literary groups, including the Bloomsbury group, the Georgian Poets, and the Dymock Poets. His love life, on the other hand, followed suit with his social life, and he had affairs with a number of women. He avoided Victorianism when writing his poems; poems from the beginning of his career centered around love, which gradually evolved into a love for the country as his brief career progressed. He volunteered for service in the First World War, but in Antwerp, he saw very little action. Soon after, he began to get war-related diseases, including sepsis, which he contracted after being bitten by an infected mosquito. At the age of 27, the young and lovely literary genius bid farewell to the world as his health deteriorated.

Rupert Brooke was born in Rugby, Warwickshire, on August 3, 1887, to William Parker Brooke and Ruth Mary Brooke. He had two younger brothers and one older brother.

Hillbrow School and Rugby School were his schools of choice. After that, he was awarded a scholarship to King’s College in Cambridge. He was attractive and pleasant, and he excelled in athletics and academics, becoming a popular figure on the campus.

He became a public figure in English intellectual circles during his college years, forming friendships with E M Forster, Virginia Woolf, and others. He helped start the Marlowe Society theatrical group and was the president of the Cambridge University Fabian Society.

In 1910, he spent a term at Rugby School, replacing his recently departed father, before returning to Cambridge. He spent the following three years traveling and writing poetry.

Rupert Brooke relocated to Grantchester after Cambridge to finish his thesis and poetry. In 1911, he published his first book, titled ‘Poems.’ In 1912, he wrote the sonnet ‘The Old Vicarage, Grantchester’ as a tribute to the city.
He, like several other poets of the time, eschewed Victorianism in favor of realism in his poems, believing that it was more descriptive and provided a better picture of real-life events.

Along with Robert Frost, Edward Thomas, Wifrid Gibson, John Drinkwater, and Lascelles Abercrombie, he was a member of the Dymock Poets. During the years 1911 to 1914, the group lived near the village of Dymock in Gloucestershire.

His mind was obsessed with sexual perplexity, followed by the rejection of his lady-love, as the year 1912 came to a close on a tumultuous note. He had a psychological breakdown and spent several months in Germany undergoing rehabilitation.

He contributed 15 pieces to the Westminster Gazette between May 1913 and June 1914. His travels to Canada, America, the Pacific Islands, and New Zealand were chronicled in the publications.

When he returned to England, he gained even more notoriety and acclaim. His social circle grew to include Henry James, Bernard Shaw, Cathleen Nesbitt, and Violet Asquith while he advocated for Poor Law reform.
Within a few months, World War I broke out, and he volunteered to fight. He applied for a commission in the Royal Navy Division and was quickly accepted since Edward Marsh, his financier and friend was Winston Churchill’s secretary at the time.

He was commissioned as a Temporary Sub-Lieutenant in the Royal Navy Volunteer Reserve and sailed with the group to Antwerp, Belgium. During the battalion’s stay in Antwerp, there was no major military action, so Brooke took advantage of the quiet and wrote his most renowned piece, a collection of five war sonnets titled ‘1914 & Other Poems.’

With the British Mediterranean Expeditionary Force, he set out for Dardanelles in February 1915, but the expedition’s path was revised mid-way. He suffered dysentery when the troops landed in Egypt.
By April, the unit was on the road again, and Brooke hadn’t fully healed. His already ill body couldn’t bear the strain after a mosquito bite turned into blood poisoning.

The five war sonnets titled ‘1914 & Other Poems’ are among Rupert Brooke’s most famous compositions. He wants to explain to his readers in the sonnets how the impending conflict is a favorable omen for the transformations that would not be possible without it. He believes that those who live to see the days following the war will be extremely fortunate because they will see the birth of a new generation; however, those who may not be so fortunate would have nothing to fear because the war will put an end to their long-standing hardships and conditions. He goes on to imagine his own death, but he is unconcerned about dying for his country, seeing it as a noble sacrifice for his comrades.

In 1913, King’s College granted Rupert Brooke a fellowship for his dissertation on Webster.

Rupert Brooke had a lot of lady loves, but he was never married. He was formerly engaged to Noel Olivier. Following her, he had brief relationships with Virginia Woolf of the Bloomsbury group, a Tahitian woman named Taatamata, and actress Cathleen Nesbitt.

Rupert is one of the wealthiest poets and one of the most well-known. Rupert Brooke’s net worth is estimated to be $1.5 million, according to Wikipedia, Forbes, and Business Insider.