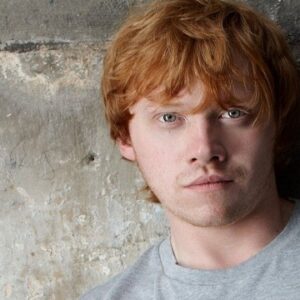 Rupert Alexander Lloyd Grint is a British film and television actor best known for his role as Ron Weasley, one of the three main characters in the Harry Potter film series and Harry’s Hogwarts companion. Of all eight films in the Harry Potter series, Rupert has accompanied actors Daniel Radcliffe and Emma Watson. This young man is also a die-hard theater buff. In reality, he began acting in theatre productions during his school years. Later, he stated freely that school had never piqued his interest. He aspired to be an ice cream vendor at first, but ended up becoming an actor instead. Aside from the Harry Potter films, this attractive hottie has done a variety of roles in films of all genres. He made a wise decision by investing his film proceeds in real estate and forming the company ‘Evil Plan Properties.’ It is one of Hertfordshire’s multibillion-pound housing conglomerates. “I’ve still got my ice cream truck if it doesn’t all work out,” this happy-go-lucky, wonderfully courteous and gentle person adds, currently living in his opulent 18th century mansion worth 5.4 million pounds set in 22 acres.

Rupert Grint was born in Harlow, Essex, England, on August 24, 1988. He is the oldest of five siblings, with James, Georgina, Samantha, and Charlotte being the others. Rupert’s father, Nigel Grint, was a car racing memorabilia dealer, while his mother, Joanne, was a stay-at-home mom.

Rupert grew up in Hertfordshire, a beautiful county north of London that is also home to the Leavesden Film Studios. It naturally fueled his desire to pursue a career as an actor.
He was particularly interested in theatre during his school years, and he staged a lot of popular plays. At the age of 11, he joined in weekend theatre classes at Top Hat Stage School and was cast as ‘Ron’ in the Harry Potter series., are some quotes

Rupert Grint’s career was launched by the Harry Potter phenomenon. Following his breakthrough in the first Harry Potter film, ‘Harry Potter and the Philosopher’s Stone’ (2001), Rupert auditioned for the British comedy ‘Thunderpants’ in 2002 and was cast as the second lead.

He also appeared in two more films around this period, including the drama ‘Cherrybomb’ (2008) and the comedy thriller ‘Wild Target’ (2010). In 2011, he appeared in a cameo in the BBC comedy ‘Come Fly with Me’ and starred in the Norwegian anti-war film ‘Into the White.’ In the same year, Grint starred in the music video for Ed Sheeran’s song “Lego House.”

Rupert’s year in 2012 was full with ups and downs. For the TV commercial ‘Visit Britain,’ he starred alongside Julie Walters and Stephen Fry as authentic English representatives. He also starred in the biopic of Dennis Wilson in the film ‘The Drummer,’ and narrated the entire film ‘We Are Aliens.’ Grint also carried the Olympic torch in London in 2012.

Rupert portrayed Clyde in the show ‘Super Clyde’ in 2013. In addition, he made his stage debut in Jez Butterworth’s comedy ‘Mojo.’ It was a smash hit, and it played at the Harold Pinter Theatre in London for nearly a year. He also starred in ‘Enemy of Man,’ a Macbeth adaptation.
In 2014, he made his Broadway debut as Frank Finger in the play “It’s Only a Play,” and in 2015, he appeared in the film “Moonwalkers.” In the video games adaptations of ‘Harry Potter and the Order of the Phoenix’ and ‘Harry Potter and the Half-Blood Prince,’ he provided the voice for ‘Ron.’, are some quotes

When the auditions for the Harry Potter film series began, Rupert Grint was a newcomer who quickly proved himself capable of landing the role of ‘Ron.’ Despite the fact that he has been in several other films in addition to the Potter trilogy, he is most known for his role as Ron Weasley in the Potter films.

After the release of his first film, ‘Harry Potter and the Philosopher’s Stone,’ Rupert Grint became a star at a young age. Grint received Satellite Awards (2002) in two categories for his part in the film: Outstanding New Talent and Most Promising Young Newcomer.
Grint was ranked 16th on Forbes’ list of the top 20 earners under the age of 25 in 2007. At the time, he was earning $4 million per year.
In 2010, he won the Otto Award for Movie Star for his performance in “Harry Potter and the Half-Blood Prince.”
In 2011, he received the BBC Radio Award for Best British Actor. In the same year, he won the San Diego Film Critics Society Award for Best Ensemble Performance for his performance in ‘Harry Potter and the Deathly Hallows—Part 2’.
In 2012, he got the 38th People’s Choice Award for ‘Deathly Hallows’ as Favourite Movie Ensemble.
In 2014, he was nominated for a WhatsOnStage Award for Best London Newcomer for his performance in the play “Mojo.”, are some quotes

Rupert Grint took part in the Wacky Rally in 2010 to raise money for the Royal National Lifeboat Institution, and he has previously given clothing to charity parties and auctions. Since 2011, he has been a supporter of the Little Star Awards, which raise funds for cancer research in the United Kingdom.
Grint created a butterfly for Chrysalis Collection, which was auctioned off on eBay.com to benefit London’s Keech Hospice Care. He took part in the ad campaign “Make Mine Milk” to promote and encourage the use of milk on a daily basis.

Rupert Grint is a one-of-a-kind caricature artist who can caricature anyone in 60 seconds.
He’s arachnophobic, which means he’s afraid of spiders!
He enjoys a wide variety of music, but his personal favorite is classic rock and roll.
He adores animals and has two Labrador retrievers named Ruby and Fudge.
Grint wanted to be an ice cream dealer since he was a kid. He now owns an ice cream truck with with all of the contemporary conveniences!