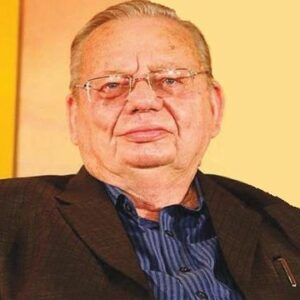 Ruskin Bond is a British-born, award-winning Indian author who is recognized for promoting children’s literature in India. He has written in excess of 500 short stories, essays, and novels. The popular novel ‘The Blue Umbrella’ was adapted into the 2007 National Film Award–winning Best Children’s Film–winning Hindi film of the same name. In addition, he has written over fifty novels for youngsters and two volumes of autobiography. Born to British parents during India’s colonial administration, he spent his early life in Jamnagar and Shimla. His upbringing was blighted by the divorce of his parents and the death of his father. He sought refuge in reading and writing, and at the age of 16, he produced one of his first short stories. After moving to the United Kingdom in quest of better opportunities, he returned to India after a few years. As a young man, he supported himself by writing short tales and poems for newspapers and periodicals as a freelancer. A few years later, Penguin Books contacted him and published many collections of his work, establishing him as a popular author in India. In 1999, he received the Padma Shri, and in 2014, he received the Padma Bhushan.

Ruskin Bond was born in Kasauli, Punjab, British India, on 19 May 1934 to British parents Edith Clarke and Aubrey Bond. From 1939 until 1944, his father served with the Royal Air Force.
His parents divorced while he was young, and his mother remarried a Punjabi guy shortly thereafter. Ruskin was very close to his father, who passed away at the age of 10 from jaundice.

He attended Shimla’s Bishop Cotton School, from which he graduated in 1950. He enjoyed reading, and the works of T. E. Lawrence, Charles Dickens, Charlotte Bront, and Rudyard Kipling had a significant impact on him.

Soon after, he shifted his focus to writing and won multiple writing prizes at his school, including the Irwin Divinity Prize and the Hailey Literature Prize. In 1951, at the age of 16, he penned one of his earliest short stories, “Untouchable.”

After completing high school, he moved to the United Kingdom in pursuit of better opportunities. While in London, he started writing his first novel, “The Room on the Roof.” It was awarded the 1957 John Llewellyn Rhys Prize to a British Commonwealth author under 30.

Ruskin Bond worked for a time in a photography studio while searching for a publisher for his works. Once he began earning a living from his work, he returned to India and stayed in Dehradun.
He worked as a freelance writer for the following several years, creating short stories and poems for newspapers and periodicals. He moved to Mussoorie in 1963, where he furthered his writing career.

His writings and articles were published in several publications and newspapers, including ‘The Pioneer,’ ‘The Leader,’ ‘The Tribune,’ and ‘The Telegraph’ at this time. Additionally, he edited a magazine for four years.

The Blue Umbrella, one of his most successful novels, was published in 1980. His growing notoriety as a writer drew the interest of Penguin Books. In the 1980s, the publishers approached Bond and urged him to write a few books. In 1993, Penguin India published ‘The Room on the Roof’ and its sequel ‘Vagrants in the Valley’ together in a single volume.

In the years that followed, a number of his works, including “The Best of Ruskin Bond” and the short story collections “The Night Train at Deoli,” “Time Stops in Shamli,” and “Our Trees Still Grow in Dehra,” were published. His popular eerie works include ‘Ghost Stories from the Raj,’ ‘A Season of Ghosts,’ and ‘A Face in the Dark and Other Hauntings,’ among others.

Ruskin Bond’s literary career covers more than five decades, during which he experimented with several genres, including fiction, essays, autobiographical, non-fiction, romance, and children’s literature. He has written nearly 500 short stories, essays, and novels, over 50 books for children, and two volumes of autobiography: “Scenes from a Writer’s Life” and “The Lamp is Lit.”

His works have been adapted for television and the big screen. In 2007, Bollywood director Vishal Bhardwaj adapted his children’s tale “The Blue Umbrella” into a film. The film was honored with the National Award for Best Children’s Film. The Hindi film 7 Khoon Maaf is based on the short tale “Susanna’s Seven Husbands” by James Bond.

“The Blue Umbrella” is one of his most well-known works. The narrative is about a young girl who exchanges her outdated leopard claw necklace for a gorgeous blue umbrella with frilly detailing. It is a simple but touching tale set in a small Himachal Pradesh village that was later transformed into a Hindi film by Vishal Bhardwaj and a comic by Amar Chitra Katha publishing.

Ruskin Bond never married. He lives in Mussoorie with his adopted family.

Ruskin Bond’s estimated net worth is $4 million, with primary income sources including children’s author, scriptwriter, and writer. We lack sufficient evidence regarding Ruskin Bond’s automobiles and way of life.

The 1978 Hindi film Junoon is based on the historical novella ‘A Flight of Pigeons’ by this renowned author.