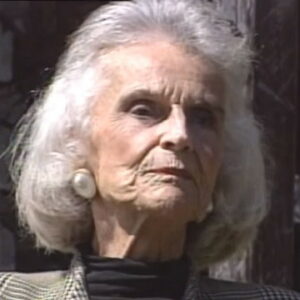 American philanthropist, author, poet, and amateur painter Ruth Bell Graham. She was the famed evangelist Billy Graham’s wife and was responsible for his ministry’s enormous success and its work across America. It is well known that Billy used to rely on his wife’s astute advice and borrow ideas from her whenever he got stuck in his area of work. In fact, it was she who labored to manage their household by herself and raise their five children alone. Graham began her own evangelistic activity and turned to write as a way to relieve her emotional tension because Billy Graham used to travel for weeks at a time, leaving Graham to care for their children alone. She wrote 13 wonderful novels, including both poetry and fiction. Her missionary parents, from whom Graham acquired the virtues of servitude and humane treatment of others, brought her up in part in China. The values she learned as a kid guided her for the rest of her life, and Graham’s assistance in her husband’s ministry was appropriately recognized when they shared the Congressional Gold Medal during a special ceremony in the Rotunda of the U.S. Capitol in Washington, D.C.

Ruth Graham was born on June 10, 1920, to Dr. L. Nelson Bell and Virginia McCue Bell in Qingjiang, Jiangsu, China. At the Presbyterian Hospital close to Shanghai, her parents served as medical missionaries.

The Bells were committed to the hospital’s medical and evangelistic efforts and instilled a passion for Christ in their children. Being the hospital’s surgical chief and administrative superintendent, her father always kept a full schedule.

On the other hand, her mother looked after the family, ran the home, educated the kids at home until the fifth grade, worked at the hospital, oversaw the women’s clinic, and collaborated with other missionaries.
Graham’s warm, devoted, and caring home environment made her a delicate and vulnerable child. She kept pets like baby ducks and chicks and used to provide a suitable funeral to the ones that died.

At the age of 13, she enrolled in a high school in Pyongyang, Korea, where she spent three years studying. She finished her secondary schooling in Montreat, North Carolina. Later, she received her degree from Illinois’ Wheaton College.

At Wheaton College, Graham and Billy Graham got married in 1943. She and her husband relocated to Montreat to be near Graham’s family after her husband joined Youth for Christ as an evangelist.

Before their children were born, Graham went on tour with her husband. She offered advice to those who had previously expressed an interest in Christ, but after the birth of her children, she was unable to dedicate as much time to these campaigns.

While her husband used to travel and preach, she took on the sole burden of running the home. The Billy Graham Evangelistic Association was officially established in 1950, and his ministry experienced significant growth.
In 1959, Graham published her debut book, ‘Our Christmas Story’, which is an illustrated volume for youngsters.

After that, she wrote and co-wrote nearly 13 books, which she used as an outlet for her emotions.
In Asheville, North Carolina, she established the Ruth and Billy Graham Children’s Health Centre in 1966. She toiled at at it till her passing.

Graham and her husband received the Congressional Gold Medal in 1996 as a result of Graham’s assistance in his ministry. The event took place in the Rotunda of the U.S. Capitol in Washington, D.C.

Graham is well-known for her literary career in addition to her contribution to making Billy Graham’s ministry a success on a national scale. She wrote thirteen books.

After courting for a few years after meeting at Wheaton College, Graham wed Billy Graham in 1943. Together, the couple gave birth to Franklin, Nelson, Virginia, Anne, and Ruth.

Graham had been in poor condition since 1995; she had pneumonia, degenerative osteoarthritis of the neck and back, and spinal meningitis. In 2007, at her request, she was taken off life support, and on June 14 of that year, she passed away.

Ruth is one of the wealthiest and most well-liked family members. Ruth Graham has a net worth of $5 million, per our analysis of data from sources including Wikipedia, Forbes, and Business Insider.

Billy Graham declared that he and his wife will be interred next to one another at the Billy Graham Library in Charlotte, North Carolina, once she passed away.
She pushed her spouse to go to the People’s Republic of China and do volunteer work for the locals.

Graham, despite the fact that her husband was one of the most well-known Baptists in the world, was a Presbyterian and occasionally taught Sunday School.
She fell while building a pipe slide for her grandchildren at her Wisconsin home, sustained severe injuries, and lived with back and hip issues for the remainder of her life.

Short chapters in her novels “It’s My Turn” and “Legacy of a Pack Rat” refer to significant biblical truths and life lessons she learned during her years as a wife, mother, and Christian.