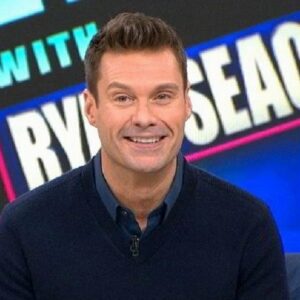 Ryan Seacrest is a radio host, producer, and television host from the United States. Seacrest, one of the most popular television shows and radio jockeys in the country, had a fairy tale start to his illustrious career. He landed a coveted internship with Atlanta’s WSTR FM, which paved the way for his remarkable career. He trained under Tom Sullivan as part of his internship, who not only improved his skills but also helped him gain the knowledge he needed to stay in the industry. He soon moved into the world of television, hosting a number of game shows. When he signed a deal to host the popular reality TV show’American Idol,’ he made his big break. His popularity grew during his career, and he finally became a household name in the United States. Ryan Seacrest is widely regarded as the top anchor in the country. ‘American Idol,’ ‘Dick Clark’s New Year’s Rockin’ Eve,’ and his radio show ‘On Air with Ryan Seacrest’ are just a few of his notable works. Several significant honors and nominations have been bestowed upon him, including Emmy Award nominations. Seacrest is also a well-known philanthropist, having founded the ‘Ryan Seacrest Foundation’ in 2010.

Constance Marie and Gary Lee Seacrest gave birth to Ryan John Seacrest on December 24, 1974, in Atlanta, Georgia, United States. Ryan has had an interest in show business since he was a child. He hung around with a microphone in hand, while other guys his age were obsessed with ‘GI Joe’ and cowboy characters.

‘Dunwoody High School’ was where he acquired his early education. He was known as the ‘Voice of Dunwoody High School’ since he was the school’s morning announcer. He landed a coveted internship at Atlanta’s WSTR FM while still in school. He learned several trade secrets from Tom Sullivan.

Surprisingly, he made his debut on the spur of the moment. As a result of the regular RJ’s ill health, he was able to land his first show in the broadcasting industry. At WSTR, he had the weekend overnight slot. His relationship with WSTR lasted until 1992, when he graduated from ‘Dunwoody High School.’ Following that, he was accepted into the ‘University of Georgia’ to pursue a degree in journalism. He didn’t abandon his radio job and continued to host a show on a local station in Athens. In 1993, he dropped out of college to pursue a full-time career in radio. He then relocated to Hollywood.

In 1993, he was cast in front of the camera for the first season of ESPN’s ‘Radical Outdoor Challenge,’ thanks to his good looks and expertise presenting radio shows. He hosted the children’s game show ‘Gladiator 2000’ from 1994 to 1996. In 1997, he hosted a new children’s game show called “Click.” He also presented “Lover’s Lane on Beverly Hills 90210,” a fake game program. When he began anchoring NBC’s ‘Saturday Night at the Movies’ in 2000, his fame skyrocketed. He was the host of NBC’s Saturday morning block from 2000 to 2001. He hosted the television reality show ‘Ultimate Revenge’ in 2001, in which he pulled practical pranks on people at the request of their own relatives and friends. TNN aired the show for two years, till 2003.

While he hosted a few game programs, his big break came with a fresh new Fox reality television show called “American Idol,” on which he co-hosted with comic Brian Dunkleman. ‘American Idol’ was a huge hit, and it rocketed him to stardom. He rose to national recognition and began to be regarded as a celebrity. In the second year of the show, he became the sole host due to his popularity.

The rising popularity of ‘American Idol’ was beneficial to both the show and him. He gained a lot of attention and became well-known all around the world. A total of 26 million people watched the show. Because of the show’s popularity, it spawned a spin-off called’American Juniors,’ which was also hosted by Ryan. He returned to American radio after obtaining a contract to serve as the new host of the radio program ‘American Top 40’ while his television career was flourishing. ‘Premiere Radio Networks’ syndicated the show.

In the same year, he took over as host of KIIS’ morning show in Los Angeles, replacing Rick Dees. ‘On Air With Ryan Seacrest’ is the new name for the show. The show, which airs on more than 150 radio stations across North America, is still one of the most popular in the country. He also serves as the show’s executive producer in addition to hosting it. He was a co-host on ABC’s ‘Dick Clark’s New Year’s Rockin’ Eve’ in 2005. Ryan was more or less the main host of the show while Clark was recovering from a massive stroke and struggling with speech and movement challenges.

The following year, he secured a three-year agreement with the US cable channel E! worth $21 million to host and create a variety of shows, including ‘E! News’ and its red carpet award events. In 2006, he established his own production company, Ryan Seacrest Productions (RSP), with Adam Sher as CEO.

Meanwhile, in 2009, he landed a lucrative $45 million deal with CKX for ‘American Idol,’ becoming him the highest-paid reality television host at the time. He was hired as the show’s host in 2012 for a two-year deal worth $30 million. He inked an agreement with NBC Universal in 2012, which allowed him to expand his job outside ‘E! News.’ He remained the managing editor of ‘E! News’ and the host of its red carpet shows under the new deal. In addition, he worked on the ‘Today Show,’ Olympic coverage, entertainment programming, news, and other special events.

His production company, RSP, is responsible for the hit reality show ‘Keeping Up with the Kardashians’ as well as its spin-offs, such as ‘Kourtney and Kim Take New York’ and ‘Kourtney and Khloe Take Miami.’

RSP produced two new reality shows in 2012, one of which aired on CMT and was titled “Melissa and Tye.”

For Bravo, it also produced ‘Shahs of Sunset.’ In addition, on August 19, 2012, E! premiered a completely new show called ‘Married to Jonas,’ which was renewed for a second season.

Following the death of Dick Clark, Ryan co-hosted the 2013 edition of ‘New Year’s Rockin’ Eve’ alongside Jenny McCarthy and Fergie. During the pre-show, they paid tribute to Dick Clark. He is a philanthropist as well as a radio broadcaster and television host. He founded the ‘Ryan Seacrest Foundation,’ a non-profit dedicated to improving the lives of sick and injured children. The organization has also opened a children’s hospital in addition to media centers.

In 2015, Seacrest presented the Fox show “Knock Knock Live.” ‘Ryan Seacrest Productions’ inked an agreement with ‘ABC Studios’ in 2017 under which the company’s narrative division would develop scripted programs for the network. He joined the ‘Paley Center for Media’s Board of Trustees’ the following year.

For creating the ABC show ‘Jamie Oliver’s Food Revolution,’ he won a ‘Emmy Award.’ He was awarded an honorary Doctor of Humane Letters degree by the ‘University of Georgia.’ In May 2016, he gave the opening speech at the graduation ceremony.

Julianne Hough, a professional dancer, actress, and singer, was his girlfriend at the time. She rose to notoriety as a result of her appearance on ‘Dancing with the Stars.’ The partnership, which began in 2010, came to a close in 2013. In 2017, Seacrest began dating Shayna Taylor, a model.

Ryan Seacrest has a net worth of $450 million.