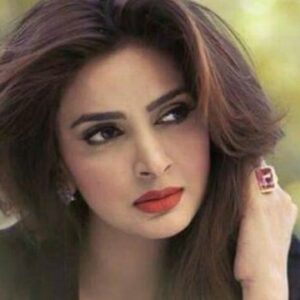 Saba Qamar is a well-known Pakistani actress who is well recognized for her portrayal of singer Noor Jehan in the critically acclaimed biographical film ‘Manto.’ She began her acting career on television shows before moving on to television movies and feature films. Because of the unusual characters she played, she became well-known as an actress. She is a critically and financially successful actress who has won numerous honors for her work. With the film ‘Hindi Medium,’ she made her debut in the Hindi film industry in 2017. ‘Lahore Se Aagey,’ ‘Dhoop Mein Andhera Hain,’ and ‘Jinnah Ke Naam’ are examples of her work that have received a lot of praise.

The Career of Saba

Saba Qamar began her career in the entertainment sector in 2004, with the television series ‘Main Aurat Hoon.’

With the biographical picture Manto’, she made her feature film debut in 2015. Her outstanding portrayal of singer Noor Jehan in the film cemented her place as one of Urdu cinema’s leading ladies.

She appeared in the Pakistani road comedy ‘Lahore Se Aagey’ and the murder mystery ‘8969’ in 2016. Her work in both films was praised, and she received a nomination for the Lux Style Award for Best Actress for ‘Lahore Se Aaagey.’

She made her Bollywood debut in 2017 with the film ‘Hindi Medium,’ in which she starred alongside Irrfan Khan. She is currently working on a film called ‘Baaghi,’ which is based on the life of Pakistani model and activist Qandeel Baloch.

Several significant prizes have been bestowed on her. She has won the Lux Style Awards eight times and the Hum Award once.

For her role in the television series ‘Tinkay,’ she received the PTV Award for ‘Best Actress Jury’ and ‘Best Actress Viewers,’ as well as the Lux Style Award for Best TV Actress in 2011.

She got the Pakistani Media Award for Best Supporting Actress for the TV series ‘Dastaan’ in the same year.

For the TV series ‘Tera Pyar Nahi Bhoolay,’ she got the PTV Award for ‘Best Actress Jury’ in 2012.
She got the Hum Award for Best Actress in a Television Series for the television series ‘Bunty I Love You’ in 2015.

Saba Qamar got the Galaxy Lollywood Award for Best Supporting Actress in 2016 for her role in the film ‘Manto.’

Saba Qamar was born Sabahat Qamar in Gujranwala, Pakistan, on April 5, 1984. Her family is largely unknown. After losing her father when she was three years old, she is claimed to have spent the majority of her childhood with her grandmother.

She moved to Lahore after finishing high school to pursue higher education, but her attention soon switched to pursuing a career in the entertainment sector. Yoga, dancing, and reading are among her favorite pastimes.

Saba Qamar has never revealed any details about her personal life to the media, but she hasn’t been able to totally avoid rumors about her relationships with celebrities and other popular personalities.

According to news reports, the actress is currently engaged to her cousin, who works as an engineer for the Pakistan Air Force.

Her name had previously been linked to Hamsa Ali Abbasi, a theatre and film artist. She, on the other hand, has refuted the charges and stated that they simply share a wonderful friendship.

She’s also known to be close friends with actor Ahsan Khan, with whom she’s collaborated on a number of projects.

Her net worth is estimated to be $3 Million Dollars as of 2021. She is also a famous actress.