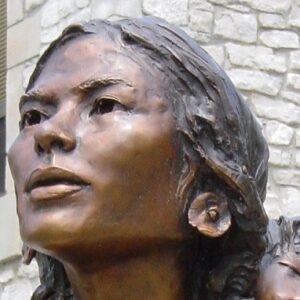 Sacagawea was the first Native American woman to travel on an expedition. She was born into a ‘Shoshone’ household in Idaho’s Lemhi County. She served as a guide and interpreter for a group of explorers on the first American expedition, the ‘Lewis and Clark Expedition.’ She stayed with the company for the duration of the expedition, serving as their primary method of communication with the ‘Shoshone’ tribes encountered along the road. She was taken by a group of ‘Hidatsa’ people when she was twelve years old and went on to become a symbol of women’s independence. Though the speculation is debatable, fiction has frequently proposed that she had a connection with either Lewis or Clark. Despite the scarcity of historical sources, a number of films and novels have attempted to address the topic. The ‘National American Woman Suffrage Association’ has accepted her as a role model. Many sculptures have been created in an attempt to depict her, yet there are still certain speculations about her appearance. Despite her death more than two centuries ago, the residents of America still regard her as a legendary hero. Continue reading to learn more about her life and work.

Sacagawea was born in the late 1780s in Lemhi County, Idaho, to the ‘Agaidika’ tribe of the ‘North Shoshone’ Native American race.

She was kidnapped, along with other young girls, by members of the enemy ‘Hidatsa’ tribe during a conflict between the two ethnic groups when she was twelve years old.

The United States Army’s ‘Corps of Discovery,’ led by explorers William Clark and Meriwether Lewis, invaded the Hidatsa hamlet where Sacagawea lived in 1804.

The intrepid explorers chose the Shoshone woman and her husband, Charbonneau, as their translators and guides.
Sacagawea and Charbonneau soon moved into the ‘Fort Mandan’ that Lewis and Clark had constructed. In April of 1805, the expedition group, which included the tribal couple, set off in a small boat known as a ‘pirogue’ towards the Missouri River.

One of the boats they were traveling in went into the river on one occasion, and it was the young woman who assisted in retrieving the majority of the items that had fallen out, including Clark and Lewis’ diaries.

They came into a Shoshone party in August 1805 and decided to exchange horses and ascend the Rocky Mountains with them. Sacagawea talked with the tribe’s members and discovered that the tribe’s chief, Cameahwait, was her long-lost brother.

The native woman persuaded her brother to provide horses for Clark and Lewis’ trek through the Rocky Mountains.
The ascent proved difficult, and the group’s starving members were forced to eat tallow candles made of cattle fat to stay alive. Sacagawea promised to prepare the roots of the ‘Camassia’ plant once they reached the other side, where it was not too cold.

Sacagawea helped Clark and Lewis buy a fur robe for US President Thomas Jefferson by exchanging her belt for it when the expedition group arrived at the Columbia River.

The young woman, together with the explorers’ servant, York, assisted in deciding on the best location for the ‘Fort Clatsop,’ where they spent the winter.

Sacagawea and her husband, Charbonneau, returned to their Hidatsa hamlet when the mission was completed. The tribal couple accepted William Clark’s offer to visit him in St. Louis, Missouri, and settle down there in 1809.

Sacagawea played a significant role in the ‘Lewis and Clark expedition’ in 1804-06. She was not only a guide and interpreter for the group, but she was also a symbol of peace because she was the only woman among the discoverers.

This remarkable Shoshone woman was inducted into the ‘National Cowgirl Hall of Fame’ in Texas after her death in 1977.
In 2001, former US President Bill Clinton posthumously awarded her the title of ‘Honorary Sergeant, Regular Army.’

Sacagawea was sold to Toussaint Charbonneau, a French-Canadian adventurer, when she was thirteen years old. Charbonneau married the young girl and resided in a Hidatsa village with her and another Shoshone women.
The native woman’s son, Jean-Baptiste, nicknamed Pompy, was born on February 11, 1809, according to papers kept by explorer Lewis. For the duration of the expedition, Jean was carried on his mother’s back. Sacagawea gave birth to a baby girl the next year in St. Louis, whom she named Lizette.

In the year 1812, this brave Shoshone woman died of a disease known as putrid fever. Though there have been rumors that she left her husband for another guy and died many years later, there has been no proof of this.
Following her death, Clark legally adopted both Jean and Lizette and was responsible for their education. Despite the fact that no record of Lizette has ever been found, it is well-known that Jean, like his mother, grew up to be an explorer.

Many books have been written about this legendary Shoshone woman and her fellow adventurers, some fictional and some as factual as possible. Anna Lee Waldo’s ‘Sacajawea’ and Grace Raymond Hebard’s ‘Sacajawea: Guide and Interpreter of Lewis and Clark’ are two of these publications.

Many films feature references to this Shoshone explorer, the most well-known of which is all three portions of Ben Stiller’s ‘Night at the Museum.’ In addition, the indigenous lady is represented by actress Alex Rice in the documentary ‘Lewis & Clark: Great Journey West.’

Philip Morris Glass, an American composer, named a section of his ‘Piano Concerto No. 2 after Lewis & Clark’ after Sacagawea. Stevie Wonder, an American singer, mentions her in his song “Black Man.”

Sacagawea and her son’s faces were inscribed on a coin released by the US government in 2000. Randy’L He-dow Teton, a Shoshone woman, was the one who modeled for the coin.

Many lakes, rivers, and hills have been named after this brave explorer as a mark of respect.
Many statues have been erected in honor of this Shoshone guide, some of which may be found in Oregon, Idaho, and Wyoming, among other places.