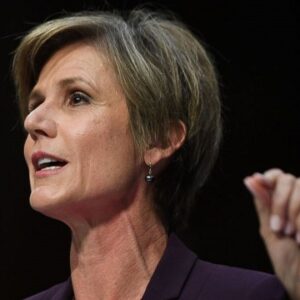 Sally Caroline Yates is an American lawyer who worked as a United States Attorney and then as the Deputy Attorney General of the United States. She was born into a family of lawyers and pursued her studies at the University of Georgia School of Law. She began her career as an Assistant United States Attorney in the United States Attorney’s Office for the Northern District of Georgia. She progressed up the ranks to become the Acting Attorney General of the United States before being stripped of her position by the Trump administration in 2017. For nearly three decades, she served as acting US Attorney in both Republican and Democratic administrations. The ‘drug-clemency program,’ endorsed by President Barack Obama, the structuring of the ‘Yates Memo,’ for corporate crimes, and the verdict against domestic terrorist Eric Rudolph, who was guilty for many bombings, are just a few of the notable actions she has made.

Childhood and Adolescence of Sally Yates

Sally Yates was admitted to the State Bar of Georgia in 1986 after graduating. She worked as an associate in the Atlanta law firm ‘King & Spalding’ from 1986 to 1989. Later, in 1989, she was hired as an Assistant US Attorney for the Northern District of Georgia by the US Attorney’s Office.
She had the opportunity to handle a variety of matters throughout her career, including white collar fraud and political corruption. She was named Chief of the Fraud and Public Corruption Section in 1994. She was the lead prosecutor in the Centennial Olympic Park bombing hearing during this time.
She was elevated to First Assistant United States Attorney in 2002 and then to Acting United States Attorney in 2004.

She was confirmed as the United States Attorney for the Northern District of Georgia in 2010, a job she was nominated for by then-President Barack Obama. Attorney General Eric Holder invited her to join the Attorney General’s Advisory Committee as Vice Chair when she was in this post.

Sally Yates was confirmed as Deputy Attorney General of the United States by the United States Senate in 2015, the second highest position in the US Department of Justice. During her time as Deputy Attorney General, she implemented the ‘Yates memo,’ which prioritizes legal processes involving corporate crimes.
The Trump administration offered her the position of Acting Attorney General commencing January 20, 2017, in January 2017. She was to fill the position until Attorney General Lynch’s successor was confirmed by the Senate.
During this time, she advised the Trump administration that acting National Security Advisor Michael T. Flynn had lied about his interactions with Russia and was exposed to Russian intelligence pressure or blackmail. The warning was revealed by ‘The Washington Post,’ and Michael T. Flynn resigned shortly after.

Sally Yates, the US Attorney General, ordered the Justice Department not to defend President Donald Trump’s executive order on travel and immigration on January 30, 2017. She received a hand-delivered letter later that day advising her of her dismissal.

She had ‘betrayed the Department of Justice by refusing to enforce a lawful order designed to safeguard the citizens of the United States,’ according to the White House. Dana Boente, the United States Attorney for the Eastern District of Virginia, took her place immediately.

The House Intelligence Committee invited her to testify at a public hearing in March 2017 regarding the ongoing investigation into Russian active measures campaign targeting the 2016 US elections. Chairman Devin Nunes, however, canceled the public meeting because Sally Yates’ testimony had not been discussed with the White House.
She and retired lieutenant general James Clapper testified in front of the Senate Judiciary’s Subcommittee on Russian meddling in the 2016 US presidential elections in May 2017.

Sally Yates was a high-ranking official in the United States Justice Department. She has been involved in a number of well-known cases and has played a key role in a number of important policy decisions. She was the author of the “Yates Memo,” a strategy that prioritizes prosecuting CEOs for corporate wrongdoing.
In the prosecution of Eric Rudolph, a terrorist who carried out a series of anti-abortion and anti-gay bombs across the southern United States between 1996 and 1998, she was the principal prosecutor. Yates was the one who got him convicted.

Comer Yates is a school administrator, and Kally Yates is his wife. James Quillian Yates, a boy, and Kelley Malone Yates, a daughter, are the couple’s children. Currently, the family resides in Atlanta.

Estimated Net Worth of Sally Yates

Now take a look at Sally Yates’s current net worth, income, and salary for the year 2021.
Sally Yates’ net worth in 2021 is estimated to be between $1 million and $5 million (Approx.)