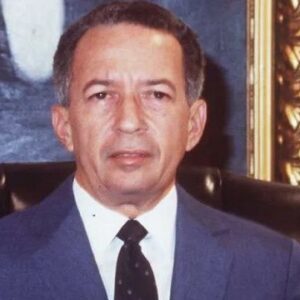 Salvador Jorge Blanco is widely regarded as one of the Dominican Republic’s greatest leaders. Blanco has not only proven that he is a superb leader during the course of his successful political career of more than two decades, but he has also contributed significantly to the expansion of the ‘PRD’ as a party worker. Despite having a legal degree, Jorge’s career as a lawyer did not continue long due to his political leanings. His commitment to helping society helped him advance to the position of president of the country. However, many people continue to criticize him for failing to stabilize the economy during his presidency. He is also remembered for the riots that erupted across the country during his presidency. The uproar is regarded as one of the bloodiest occurrences in Dominican Republic history. Despite reaching the pinnacle of his profession in a short period of time, Jorge’s career was cut short when he was the victim of an alleged conspiracy orchestrated by his successor, Joaqun Balaguer. Blanco’s son tweeted after his death, “We are proud of his legacy,” as a tribute to his father’s contributions to the country.

Salvador Jorge Blanco was born on July 5, 1926, in the Dominican Republic’s city of Santiago. His initial education was finished at the ‘Academy of Santa Ana,’ which was located in his hometown. Later, he transferred to the ‘Normal School Ulises Francisco Espillat,’ which was also located in the same neighborhood, to complete his higher education.

Jorge went on to earn a law degree from the ‘Autonomous University of Santo Domingo’ in 1950. After presenting his dissertation on ‘unit Jurisdiction Analyzed in the Exercise of Public Action and Civil Action,’ he received his PhD from the same school.
Blanco travelled to Spain for a brief time the following year to pursue his PhD degree at the famed ‘University of Madrid.’ During his tenure here, he presented a thesis on ‘Political Asylum.’

Blanco returned to his homeland in 1961 after finishing his studies. The fall of the great tyrant Trujillo was a major political event in the Dominican Republic at the time.
In the same year, he joined the ‘National Civic Union,’ and within two years, he had been appointed to the position of Committee Secretary.

Blanco’s political career formally began in 1964, when he joined the ‘Dominican Revolutionary Party (PRD).’
He was appointed to the ‘National Executive Committee’ as well as the PRD’s political commission two years after joining the party. He was assigned to these positions till 1973.

After being removed of his duties on the ‘Code Commission,’ a commission involved in the formulation of the ‘Code of Commerce,’ Blanco resumed his posts on the ‘National Executive Committee’ and the ‘Political Commission’ in 1976. He was promoted to Chairman of the PRD a year later.

The year 1982 was a watershed moment in Blanco’s political career. He was inaugurated in as the Dominican Republic’s 48th president this year, succeeding his party colleague Jacobo Majluta Azar, who had previously held the position.

It was thought that his government would solve the social problem of ‘Neopatrimonialism’ when he was elected, however he fell short of expectations.

The controversial ‘economic stabilization program’ of 1984, which resulted in a dramatic increase in the pricing of everyday commodities, was one of the most infamous highlights of his presidency. Many individuals died as a result of the people’s uprising against the Blanco government’s move. The administration has been chastised for failing to prevent violations of civil and human rights.

A shootout at the famed ‘Concorde Hotel’ in 1985 jolted the administration once more, preventing the election of the PRD’s next presidential candidate. When the ballots were being counted, the incident occurred. During this time, the country’s growth rates were likewise negative.

In 1986, the country’s leader was forced to resign. He was accused of corruption and a warrant was issued for his arrest. He attempted to avoid arrest by claiming ill health and obtaining admission to a private facility.
To dodge the wrath of the law, he even requested political refuge from the Venezuelan government. However, the Latin American country refused to comply, so he fled to the United States for a brief period to avoid further detention.

After Joaqun Balaguer took control in 1988, he was finally tried. Blanco was sentenced to a total of 23 years in jail.
Blanco was acquitted after the Supreme Court attempted to explore the facts of his allegations in 2001, and it was discovered that he was a victim of Balaguer’s conspiracy.

Blanco is well recognized for his work in the Dominican Republic’s ‘Code Commission’, in addition to different duties within the PRD. He was a key figure in the formulation of the trade code.

Asela Mera Checo was the famous politician’s wife. In 2007, Asela passed away.
Blanco fell at home while attempting to get out of bed. He died on December 26, 2010, just a few days later. Orlando Jorge Mera, his son, and Dilia Leticia, his daughter, survive him.
The President of the Dominican Republic, Leonel Fernandez, had declared a three-day national mourning period in honor of the great leader. At the time of this leader’s death, flags across the country were lowered to half-mast.

Salvador is one of the wealthiest politicians and one of the most well-known. Salvador Jorge Blanco has a net worth of $1.5 million, according to Wikipedia, Forbes, and Business Insider.