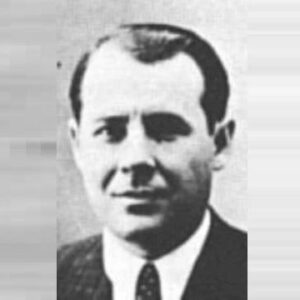 Salvatore Maranzano was an early Cosa Nostra boss from the town of Castellammare del Golfo, Sicily. He led the Castellammarese War against competitor Giuseppe “Joe the Boss” Masseria and eventually dethroned him as the mafia’s capo di tutti capi (“boss of all bosses”). However, Charles “Lucky” Luciano, who had aided him throughout the struggle against Masseria, ultimately turned against him, believing Maranzano to be even more power-hungry than Masseria. Due to his love with Caesar’s Roman Empire, he was dubbed ‘Mustache Pete’ — one of the old-school mafiosi like Masseria. Maranzano was assassinated by Luciano shortly after assuming supreme Mafia control. Luciano immediately abolished the status of ‘capo di tutti capi’ and spread power among Mafia families to avert further turf battles. After Maranzano’s death, Joseph Bonanno, his protégé and later his underboss, took over the majority of his rackets and founded the Bonanno crime family. Maranzano is a well-known figure in popular culture, having appeared in numerous crime novels, films, and television shows, including Mario Puzo’s ‘The Godfather,’ ‘Mobsters,’ and ‘Boardwalk Empire.’

Salvatore Maranzano was born in the Sicilian village of Castellammare del Golfo on July 31, 1886. He was one of three brothers, one of which was named Nicolo Maranzano.

Throughout his youth, he aspired to be a priest and even attended school to obtain the necessary education to accomplish this aim. However, he became embroiled in the continuing battle between the Bonanno and Buccellato families and quickly rose to the rank of Military Mafia commander as a result of his abilities.

He consolidated his mafia power further by marrying Elizabetta Minore, the daughter of a respected Don in Trapani. With his imposing presence, he quickly acquired the respect of his underworld peers.

He was attracted by Julius Caesar and the Roman Empire from an early age, and even after relocating to America, he frequently endeavored to educate his subordinates about the ancient traditions. As a result, he earned the nickname ‘Little Caesar’ among his underworld contemporaries.

Salvatore Maranzano, like many other Sicilian Mafia members, immigrated to the United States following World War I, first through Canada and then via Buffalo. Although the precise year of his arrival in America has not been established, according to Joseph Bonanno’s memoirs, his life altered in 1925 when Maranzano arrived in New York.

Stefano Magaddino was one of the founding members of the Sicilian community in Williamsburg, which had existed for almost three decades. He established a respectable real estate brokerage in Brooklyn and used it as a front for his unlawful activities.

His true passion was his burgeoning bootlegging operation, which proved extremely profitable during the prohibition era. He had a sizable alcohol distillery in Dutchess County, which grew to be one of the largest at the time.

He became involved in prostitution and illegal drug smuggling shortly thereafter, and as his wealth and influence expanded, Giuseppe “Joe the Boss” Masseria requested financial contributions to crush the Castellammarese. He also served as a mentor to Joseph Bonanno, who would ultimately become his underboss, during this time.

He was chosen chief leader of the Castellammarese following the deaths of major members such as Vito Bonventre, amid growing unhappiness with the uneducated and dictatorial Masseria among the Mafiosi. Maranzano, fearful for the survival of his vast mafia empire, declared war on Joe Masseria in 1930, initiating the Castellammarese War.

For a long period of time, the two parties seized each other’s trucks, destroyed breweries, and engaged in street brawls and shootings. Maranzano gained the upper hand through agreements with Salvatore Bonanno’s son, Giuseppe Bonanno, and Gaetano Gagliano, which resulted in the departure or murder of a large portion of Masseria’s crew.

The battle ended when Masseria’s subordinate Charles “Lucky” Luciano forged a secret arrangement with Maranzano and then betrayed his own boss. On April 15, 1931, Luciano and Masseria proceeded to a restaurant on Coney Island, where Luciano was assassinated by four armed men when he excused himself to use the restroom.

At heart a ‘Mustache Pete,’ he wanted to rebuild the mafia along the lines of Roman Emperor Julius Caesar’s military chain of command, further separating him from Luciano, Vito Genovese, and Frank Costello, among others. Despite his advocacy for modern management approaches, his Old World attitudes and condescending treatment of his subordinates belied his appearance.

He reportedly instructed his closest advisers that he needed to eliminate some of the most influential criminals, including Charles Luciano, Al Capone, Joe Adonis, Frank Costello, and Dutch Schultz. Luciano, on the other hand, who was already plotting his successor as boss of bosses, learned of his plans to hire young Irish hitman Vincent “Mad Dog” Coll and moved quickly to attack first.

Luciano and his right-hand man Meyer Lansky sent a group of assassins dressed as accountants to Maranzano’s office on September 10, 1931, less than five months after Masseria’s death. They disarmed Maranzano’s guards on the 9th level of The Helmsley Building and shot and stabbed Maranzano to death.

Salvatore Maranzano was supposedly married to Elizabetta Minore and had four children with her. He was interred in Queens, New York’s Saint John’s Cemetery following his death.

He was fictionalized in the best-selling novel ‘The Godfather,’ despite the fact that the act of convening a meeting to reorganize the American Mafia was credited to the protagonist, Vito Corleone. His character in the story is based on his real-life adversary Joe Masseria.

Meyer Lansky was an American organized crime figure with a net worth of $600 million dollars, adjusted for inflation, at the time of his death. The FBI believes that when he died, he left between $300 and $400 million in clandestine bank accounts located throughout the world.

The photograph purported to be of Salvatore Maranzano was eventually recognized by author David Critchley as Salvatore Messina, a London-based criminal. As a result, the only photographs of him available are those taken at the scene of his death.